Panna’s rural youth migrated with the hope that their remittances would promote progress. Back after the lockdown and with no local work, they are unsure of their future 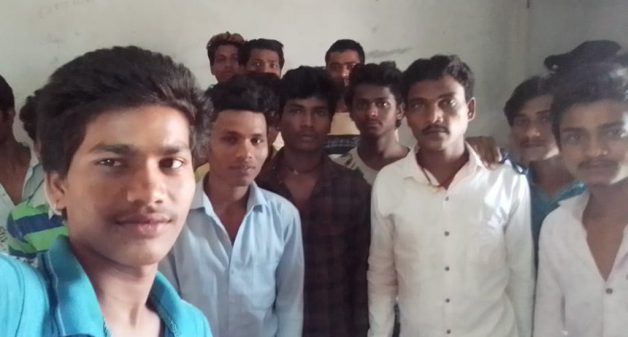 The migrant youth who were stranded in Rajkot, sent a picture of themselves, seeking help to return to their village during lockdown (Photo by Gulab Singh)

Bundelkhand has always been a drought-prone area with myriad challenges. Erratic rains, poor agricultural yield, unemployment, poor health infrastructure and literacy rates, and many such issues prevail in this region of Madhya Pradesh.

Panna, one of the districts that come under Bundelkhand, has a vast tribal population and marginalized groups. Most of them migrate to cities in search of better opportunities. They work at construction sites, in textile, plywood and other such industries.

Men in Panna usually migrate after helping their families in sowing seeds in their farms and return for the harvest season or for festivals and marriages. They migrate to earn additional money. Women and the elderly stay back to take care of the farms and they take up local labor work, where available.

There are thekedaars (middle men) in each village who help the youth migrate. The youth mostly go together, to places where others have already gone. When the pandemic hit and lockdown began, many had no option but to stay on in destination sites, exhausting their hard earned money. Eventually they returned, facing an uncertain future.

“We stayed in Maharashtra for two months without receiving our payment. We had to spend whatever we had on food,” said 19-year-old Raghubir of Kudan village. “We were unable to send a single penny home, instead had to take money from our families to come to the village.”

Raghubir and his friends Har Prasad and Murali Lal worked in an aluminium factory in Maharashtra. They had gone with the plan of returning after two months and then the lockdown happened. Lack of local jobs pushes them to migrate. “We will not go this year but will start looking for work from next year. We can’t find any work here,” said Raghubir.

Raghubir’s father is the only earning member in his family. To support his family financially Raghubir started working this year only. His elder brother is physically disabled which leaves him with no option but to find work elsewhere to help his family.

Veeran, Raghubir’s father is a farmer who has a very small farmland in Kudan. “I transferred Rs 3,000 to my son’s account so that he could return safely. I was hoping that he will earn and send us money, instead I had to send him money,” said Veeran. “I hardly earn enough from my farming.”

Gulab Singh, a 19-year-old, and 16 other youth from Kanchanpura village went to Rajkot, to work in a textile factory. His father and two elder brothers farm in the village. He said that he enjoyed the work in the factory. He found it different from what his parents were doing. It didn’t require a lot of labor, he had fixed work timings and payment; he became fond of the city and the lifestyle there.

When the lockdown was announced, the company closed its work and gave them a week to return to their village. “We didn’t know what to do and how to return as transport services were stopped suddenly. We didn’t get paid for the work we did,” he said. “Company was not letting us go outside to search for means to return. We were hoping for the government to come to our rescue.”

The village chief had sent the list of migrants to the administration, seeking help, but there was no immediate action. “We are totally clueless of what would happen. If we get the virus, there’s no one to take care of us. We will feel safer at home. We will eat whatever is available, but we will be happy that at least we are with our family,” said Mathura, one of the youth, while stranded in Rajkot.

They were ready to walk 1,200 km to reach Panna. Gulab Singh and his friends received help through India Fellow’s COVID-19 relief work. The Project Koshika – Bundelkhand Action Lab team, that works in the forest villages of Panna Tiger Reserve on maternal and infant health, arranged for a bus and the migrants reached Panna safely.

Buddha Singh and Ashok of Khamri village in the buffer area of Panna Tiger Reserve worked in a plywood factory in Punjab. Buddha Singh has two younger brothers; his parents practice agriculture in Khamri. Ashok’s father works in Panna Tiger Reserve as a contractual accountant during tendu leaf collection. Ashok migrated so that the additional income could help his parents and two sisters.

Buddha Singh, Ashok and 11 youth from the village had migrated for the first time this year. On return, Buddha Singh and Ashok got work under Mahatma Gandhi National Rural Employment Scheme (MGNREGS) for a few days. They are yet to be paid for their work. They didn’t want to do MGNREGS work as it is not what they did in the city, and they don’t enjoy doing the extensive labor work.

These youngsters have aspirations to do something different and come out of the uncertain, hectic and difficult agrarian lifestyle that their parents have. They want to explore new avenues, they have bigger dreams and be the influencers to change the livelihood pattern of their village. Also, they want to help their families with the additional income.

Once these youngsters return from the cities they are seen to be adopting new lifestyles of the urban spaces. Many positive changes can be seen in them after they return. They become more confident than their fellow villagers. They tell their stories to the fellow villagers, about their hardships, beautiful memories, the stark differences and other narratives worth sharing.

Akash, a 22-year-old from Muthua village, who migrated to Dharmshala wants to build his own two storey kachcha or rudimentary house which will be different from the other houses. He had been saving money to fulfil his dream. After the lockdown and his sudden return to the village, he cannot continue with the construction work that he had started.

There are several youth in the communities who desire for similar wishes. Some of them wish to grow cash crops or open small shop for their family members to run. Some save money to buy motorcycles or furniture for their homes.

These youth will get married soon and the number of family members will increase. They will have more responsibility. They have to earn more and save more so as to give their children a better life that they were deprived of.

Though some of them still have hope that the situation will be normal soon and they will get to work again, there are many who are afraid to migrate. The parents of these youth want them to stay back and earn whatever they are able to, in their village or district.

Does this mean the end of their aspirations? Or slowing down of the development processes in the villages? Does this mean youngsters shifting back to their conventional livelihood of farming which can be uncertain, insufficient to run the family and cause recurrent losses?

Or does this mean widening of the gap between the villages and the urban spaces? Will they go back again or accept the situation as their fate? Will this fear fade away or spread to those who still aspire to do something different?

The answers to these questions lie in the future of these migrant communities, rural villages and the steps taken by the stakeholders and decision makers. Till then the youth can only hope and wait for the world to get back at its original pace and become normal again.

Saurav Verma, an electrical engineer by profession, is an India Fellow alumnus, currently involved in Project Koshika, working among the tribal communities in Panna Tiger Reserve. Views are personal.