Lack of livelihood pushes returned migrants back to cities

Deskilling of Central Indian Plateau Adivasis has led to loss of traditional knowledge and indigenous seeds. Efforts are on to reskill them by reviving traditional practices 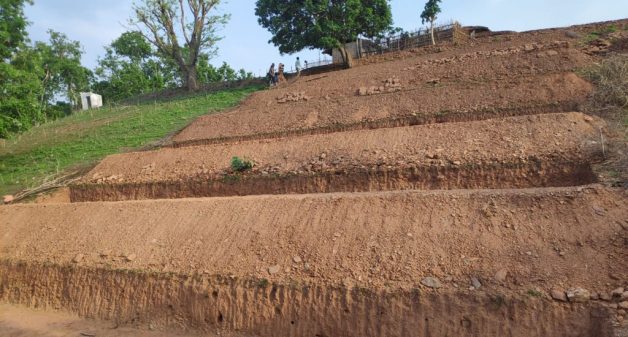 Terrace farming has been introduced in Chataniha, as part of the reskilling of farmers (Photo by Jostine A)

“The food is not tasty anymore. We do not feel strong. We are taking poison,” said Temba Oraon, an elderly villager in Jana, a village in Gumla district of Jharkhand. Hirasand Oraon, another villager, his thoughts and added that the soil was more fertile earlier. sexyxxxsexyxxx.ccsexyxxx

The villagers said that it was no longer possible to grow the same healthy foods. “People are growing hybrid varieties, because the yield is good,” said one of them. “One needs to apply chemical fertilizers but the fertilizers make the soil hard.”

In 2017, a group of development practitioners from Professional Assistance for Development Action (PRADAN), a non-profit organization, attended a course on development perspective at Azim Premji University (APU) and learnt about deskilling.

Deskilling is a process of elimination of skilled labor within an economy. In 1974, in his book Labor and Monopoly Capital, Harry Braverman described deskilling as a process of separation of intelligence from muscle that helps the ruling class dominate both.

After the course, some of the PRADAN researchers designed Adaptive Skilling through Action Research (ASAR) jointly with some faculty members of APU, to find out the extent to which deskilling had happened in the Adivasi community with whom PRADAN was working, and to initiate a process of reskilling.

In agriculture, deskilling results in farmers not applying their intergenerational farming knowledge. Instead, they follow recommendations of research firms, seed and pesticide companies, eventually forgetting how the local environment works.

So far, the issue of Adivasi farmers’ deskilling has seldom been part of popular development discourse. This article highlights the importance of this issue, showcasing case studies from Jana, Ghughri and Chataniha, villages inhabited by Adivasis of Jharkhand and Madhya Pradesh.

In Adivasi society, the extent and characteristics of deskilling differed due to specific history and context. The nature of deskilling and the issues that the deskilled farmers are facing are different in the three villages. A nuanced understanding is imperative for reskilling initiatives.

Jana is a small village in Gumla district of Jharkhand. It is about 20 km from the district headquarters. The Oraon tribe, an ethnic group that speaks a Dravidian language, inhabits almost 90% of the 140 households in Jana.

Some elderly people still remember their traditional knowledge. They describe how the forest and farm are connected to each other. “The forest is a rich source of organic matter,” said Hirasand Oraon. “The rainfall in the forest carries those organic matters to the land below, increasing the fertility of the land.”

Temba Oraon said that people in Jana used to cultivate many varieties of indigenous paddy. Mahadev Oraon showed indigenous tomato seeds. He said that they could cultivate tomatoes during winter with residual soil moisture.

Deskilling in Jana started with the advent of modern agriculture characterized by hybrid seeds, pesticides and fertilizers. Sukanti said that this trend started when agriculture department officials started visiting Jana and said that their agronomic practices were not scientific and needed to be changed. They convinced the villagers to follow the cultivation practices prescribed by them.

From more than 15 indigenous varieties they used to cultivate about a decade ago, the rice types in Jana were reduced to three high yielding varieties (HYVs). Though some farmers haven’t forgotten their traditional knowledge, they do not use it as every other farmer is using the modern method.

Reskilling was started with an initiative to revive the indigenous seeds and traditional agronomic practices. Some farmers like Temba, Mahadev and Hirasand were cultivating indigenous paddy in a small area for their own consumption. Some villagers brought some varieties from their relatives in other villages. They could arrange 13 varieties of indigenous paddy seeds.

This year 90% of the households in Jana have cultivated those seeds. Harvesting will be done in November. Also, those seed varieties have been sent to laboratories for testing their nutrient content; test results are awaited.

Apart from using local seeds, villagers are also experimenting with different traditional agronomic practices such as broadcasting of paddy seeds, exploring traditional seed storing techniques rather than using plastic drums, seed exchange among villagers, multi-cropping, and exchange of labor among themselves.

Ghughri is a forest village situated in Dindori district of Madhya Pradesh. It has 253 households with more than 84% of its population belonging to the Scheduled Tribe; the major tribe being Gond which is the largest ethnic group in India.

In 1864, the British established the Imperial Forest Department in India and became the owners of forests. In forests, they established or approved establishing of small villages. Inhabitants of these villages could work on forestry related activities such as plantation, tree cutting, etc. These villages are called forest villages.

Heeralal, a villager, said that almost 150 years ago their ancestors settled in Ghughri. Their ancestors had been living within the forest, as they have been traditional hunter-gatherers. When the British Raj established their ownership over the forest, the Gonds were compelled to stop hunting and gathering to a large extent.

They had to become laborers for the forest department in exchange for food grains and / or meager cash. Heeralal also said that they used to cultivate minor millets in parts of the forest for their own consumption.

“Decades ago we received land rights in the form of patta and converted part of our undulating lands into paddy fields by leveling and bunding,” said Gangaram, an elderly villager. The patta given by the forest department gives the patta-holder the right to cultivate crops on the designated patta land; the pattaland can’t be transferred to others though the descendants will inherit the rights.

The Gonds continued to cultivate kodo (kodo millet) and kutki (little millet) on the lands with high slope. The paddy production declined with time as the forest contributing to the fertility of the paddy lands below started getting thinner. Last year’s data on soil organic carbon shows that the lands at one patch (locally called bagdhara) below the forest is as low as 0.2%.

The process of deskilling started almost 150 years ago in Ghughri when the forest officers started treating the villagers as laborers, making the villagers follow their instructions. This process of alienating muscle from intelligence produced a village full of low skilled workers.

Though seed companies didn’t reach this village yet, the extension wing of the agriculture department arrived and started distributing bio-fertilizers (living nitrogen fixing and phosphate soluble bacteria in a powdery solution), and organic pesticides among the villagers and telling them how to use those. This deskilling in agriculture has a history different from Jana.

The reskilling started by reviving the villagers’ knowledge about forest, its species – both flora and fauna. The villagers led by the elderly people started putting together a biodiversity register and in the process they are relearning about different species and their use in Adivasi life. They are also planting floral species which are on the verge of disappearing from their forest. READ: Gond children learn to conserve forests

Chataniha is a village in Singrauli district of Madhya Pradesh. It has 382 households and around 90% of them are Gonds. There are various stories about the Gonds’ original home.

Ramkali Bai of Chataniha said that the first group of people from Gond community settled in Chataniha almost 100 years ago during the reign of Maharaja Gulab Singh of Rewa who ruled from 1918 to 1946. Further, some more Gond families, displaced during Rihand dam construction were rehabilitated here in the 1950s.

The terrain is highly undulating, characterized by small hillocks with steep slope, the slope being more than 30% in most of the cases. There are narrow streams in between two hillocks. The Gonds converted the streams into paddy fields by constructing bunds and started cultivating rice for their own consumption. They also used to cultivate some millet, mostly kodo millet and little millet, on the hill slope.

Shanti, another villager, said that some upper caste families came here in the mid-60s. Gradually, the upper caste people encroached upon the converted paddy fields. The Gonds, by and large, were left with the hill slopes. Extensive ploughing on high slopes loosened the topsoil leading to erosion; after 15 years of cultivation only rocks and pebbles remain, making the lands unsuitable for agriculture.

Seed companies started selling hybrid seeds here a couple of years ago. Villagers are following their recommendations with a hope that it might give a better yield. However, more lands are becoming unproductive in the process.

The ASAR researchers focused on soil conservation in Chataniha. Though the villagers were aware of the adverse effect of ploughing on the slopes, they had no other option as those were the only cultivable lands they had.

The farm-terraces were on land having similar slope as Chataniha. The vertical portion of the terrace was pitched with grass. That was the fourth year after construction and the entire patch was stable; farmers were regularly doing vegetable cultivation on that land.

Chataniha farmers came up with a model having wider strips, so wide that a pair of bullocks can move with a plough. The height between two strips was kept almost one meter. They made a small alley at one side of the terrace along which the bullocks could climb up to the strips for ploughing.

Eventually terracing was done on three patches (2 acres of land) of land in Chataniha before the onset of monsoon this year. District authorities visited Chataniha and got convinced about the feasibility of farm-terracing. They have included it under MGNREGA.

Now, farm-terracing is done in other neighboring villages in the district. 25 farm-terracing structures (on 15 acres of land) are either completed or ongoing in nearby villages in five panchayats. In future, land-terracing may change the agriculture productivity to a great extent.

Dibyendu Chaudhuri is a geologist by education. Parijat Ghosh is an electrical engineer turned development practitioner They work in Professional Assistance for Development Action (PRADAN), strengthening the livelihood of indigenous communities in the Central Indian Plateau. Views are personal.