Families learn to navigate lockdown together

Lack of livelihood pushes returned migrants back to cities

Lakhs of rural Rajasthan migrants returned easily during lockdown since they worked in neighboring Gujarat. However, with no local employment avenues, the urban exodus would start again 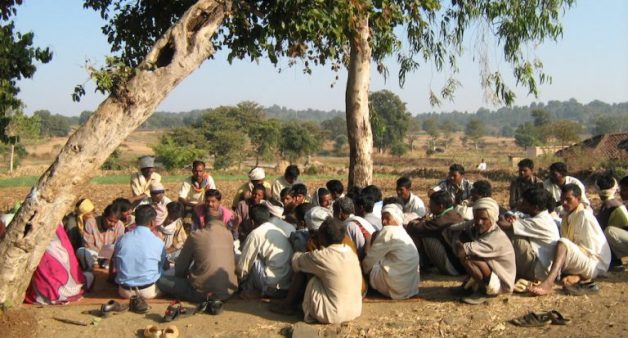 Rajasthan migrants could return easily from neighboring Gujarat during lockdown. But with no rural employment, they are going back to the cities (Photo by Ishan Agrawal)

Naresh from Kalunda village in the Gogunda region of Udaipur district works at a furniture factory in Rajkot in the neighboring state of Gujarat. He stays in Rajkot for up to eight months a year, earning a salary of Rs 8,000 per month. As soon as the lockdown was announced on 25 March, he started on foot and then took a truck, to reach home.

“People from my panchayat go regularly to Rajkot or Ahmedabad. I met a few of them on my way back home,” he said. “We returned via Ahmedabad, where I saw a few familiar faces. We coordinated our commute amongst ourselves and reached Gogunda though the truck ride was super expensive.”

Naresh is among thousands of workers who seasonally migrate to Gujarat. Compared to the difficulties endured by stranded workers in cramped, dimly lit factory floors without food or water in cities, Naresh was one of the fortunate ones to have left early.

However, to say that all is well on the rural front is misleading. Though Naresh was able to acquire a sense of temporary safety by returning, the lack of income in the village is a reminder why people leave in the first place, and of why the likes of Naresh might be returning to Gujarat soon.

With granite spangled hilly terrain and a largely tribal demography, the region is arguably the least developed region in the state. The district has a Human Development Index of 0.48 which is lower than the Rajasthan state average of 0.68.

Perpetual lack of employment opportunities, poor access to welfare schemes, besides dysfunctional civic amenities and infrastructure plague the region. This is compounded by the lack of land holdings or extremely small land ownership among tribal communities.

Further, a rapidly declining proportionate share of agriculture to the state’s net domestic product invariably pushes a large number of young men towards the neighboring state of Gujarat in search of livelihood opportunities.

According to the Government of Rajasthan’s Labor Employment Exchange portal, between early April and the end of May, over 13 lakh workers returned across the districts of Udaipur, Dungarpur, Sirohi, Jalore, Nagaur, Barmer and Bikaner.

Proportionate to the total male workforce in the state, which is approximately 3.5 crore, this is not an exceptionally large number. However, the fact that 13 lakh workers returned to the state in two months is an indication of an urban exodus unprecedented in India’s modern history.

With those many workers back in their villages, the status of India’s rural employment has been a topic of discussion. The Mahatma Gandhi National Rural Employment Guarantee Scheme (MGNREGS) website states that for Rajasthan, Rs 3,700 crore has been allocated in over 11,300 panchayats for the financial year 2020-21, providing employment to over 40 lakh rural households.

Our research and advocacy work in these districts, however, portrays a different reality. Surreptitious payment mechanisms, arbitrary appointment of work supervisors at MGNREGS site and payment of wages considerably below the official daily wage stipulation seem to be the reality of the MGNREGS experience in south Rajasthan.

Kanta, a MGNREGS worker from Ambawa village has three children and an ailing mother to look after. “We are getting 150 or 100 Rupees for a day’s work. Can you look after your family with Rs 100 a day? What other option do I have? If I refuse to work, I will not be able to run my house!”

As COVID-19 gradually withers from public imagination, workers continue to make their way back to Gujarat in search of livelihood, more out of compulsion than choice. Many may end up with work they have not done before, given the uneven impact of the lockdown across sectors. For instance, construction work may resume sooner, thereby absorbing workers previously employed in the hotel industry.

The movement of workers in the Gujarat – south Rajasthan corridor in the post-lockdown scenario raises several questions, not just around the time-hallowed issue of inadequate employment in rural areas, but also on the impact that descending livelihood opportunities in cities have on the population.

The lockdown may have pushed the workers to return home temporarily, but what seems to be unfolding now indicates sheer resilience and survival mechanism that migrant workers have come to cultivate over decades of inter and intra state movement.

Naresh has plans of heading back to Rajkot soon. He wishes he could stay on, but he needs to provide for his family. There is no guarantee that factories in Rajkot will open up any time soon. He has no income. COVID-19 is the last thing on his mind these days.

Anhad Imaan is a Udaipur-based researcher and writer who currently leads Communications and Advocacy at Aajeevika Bureau. Views are personal.