Families learn to navigate lockdown together 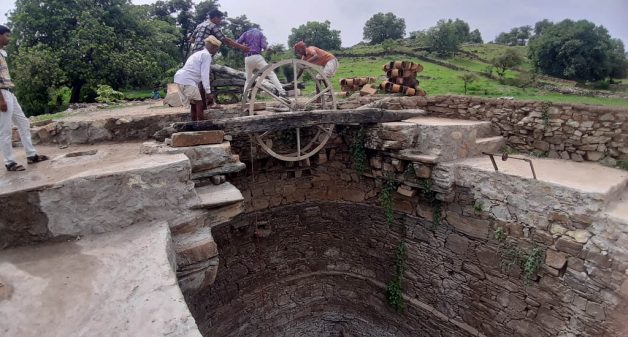 As soon as the nationwide lockdown came into effect, Bhura Ram and his cousins came back to their village from Ahmedabad, Surat or Bombay, leaving behind their jobs as helpers in textile industries, masons, share croppers and painters in the cities.

Of the 85 households in Kanela village, almost 80% have at least one male member migrating to the city for work. “Most of the male members of our villages work in cities. It is because of the lockdown, that all of us are in the village at the same time,” said Bhura Ram.

A month into the lockdown, Bhura Ram and others in his village gave up on the expectation of receiving anything substantial from the government. “How long can we wait? There is no work outside, so we thought of working on our village assets,” said Bhura Ram.

Along with 20 families, he reconstructed the well in Kanela village in Brahmano ka Kalwana panchayat of Udaipur district. “It is not that we hadn’t thought of constructing this well before but there were always resource constraints,” said Bhura Ram.

Their efforts have not only ensured access to drinking water, but have spurred residents of many villages into action, resulting in restoration of communities’ common assets.

One common issue that families in Kanela under Gogunda administrative block face in the summer months is the intense water scarcity. Due to low rainfall and lack of water conservation structures, almost all the families face difficulty in irrigating their farm lands. Hence they practice rain-fed cultivation only for three months, that is, one crop per year.

Pavni Bai, a Garasiya tribal woman of Cheetarawas village in Sayra administrative block, spends seven hours a day to collect drinking water. As the only hand pump is 2.5 km from her house, for each trip, it takes her about 40 minutes to fetch water, traversing the hilly terrain. The time has increased since the water requirement of the village has increased because of the lockdown.

In Sulkhi Mori village in Patiya panchayat of Gogunda block water that gets collected through percolation in a small pit in the ground is the only source of drinking water for 28 families. The villagers use the same water source for cleaning and washing clothes.

It is the same situation in all the tribal villages of Gogunda administrative block. The tribal dominated hamlets are farther from the water sources compared to the ones dominated by the upper caste members. The same can be observed in Kanela and Cheetarawas too.

For the last three years, residents of Jemli, Bhrahmano ka Kalwana, Cheetarawas, Patiya, and Morwal panchayats in Gogunda and Sayra blocks have been requesting their panchayat members to make arrangements for water conservation and supply, especially during the summer months.

The collective of 300 Adivasi women in Sayra block, headed by Mirki Bai, have had many attempts to make the local administration respond. However, none of their attempts led the administration to find a permanent solution to their water woes.

During the lockdown, since most of the male migrants were back in their villages, instead of waiting for the administration to take action, the villagers decided to build and deepen their wells. “We don’t have the kind of money to do this work. But we could offer physical labor,” said Bhura Ram.

Mirki Bai, leader of the women’s collective, with the support of Tulsi Ram and Bhura Ram, members of the workers’ collective, convinced other male members to take turns in renovating the village well. When the villagers agreed, they formed a five-member monitoring committee.

The monitoring committee decided to form a group of about 25 young men to work on the well on a rotation basis, so that everyone could contribute to the work. Aajeevika Bureau, a non-profit organization working in the region, bore the cost of about Rs 30,000 incurred on hiring blasting machine, pulley system and the like, besides construction material.

The families bore some of cost that totaled to about Rs 28,000. For the families that sent their young men to work on the well, Aajeevika Bureau provided additional ration of wheat, rice, daal, oil, etc., supplementing the 10 kg wheat provided by the panchayat. They also provided other essentials such as toiletries and disinfectants.

“One person cannot do anything but when we are together, see what we are able to achieve,” said Mirki Bai, whose family also worked on the well reconstruction. “This is what the collective has taught us – strength lies in unity.”

In Kanela, people’s efforts led to deepening of wells to approximately 15 feet, which now yields 5,000 liters a day, contrary to the 500 liters yield earlier. It was the collective strength of the community leaders and the women’s collective that gave this initiative the much-needed momentum.

Following the restructuring of the open well in Kanela village, community members in 33 villages across four administrative blocks, including Gogunda, have taken up restoration of their community assets.

In Cheetarawas, Pavni Bai’s village, 22 families worked on deepening the well so that they would have better access to drinking water. With community’s collective efforts and Aajeevika’s support two wells were deepened. One of the wells is close to Pavni Bai’s house, saving her a lot of time in fetching water.

Around 650 families have started rebuilding their wells, farm lands and other areas of community importance. Young migrants who have returned to their villages because of the lockdown, and daily wage workers decided to create /restructure sources of drinking water and agricultural purposes. This would provide long term benefits to the families in these remote Adivasi hamlets.