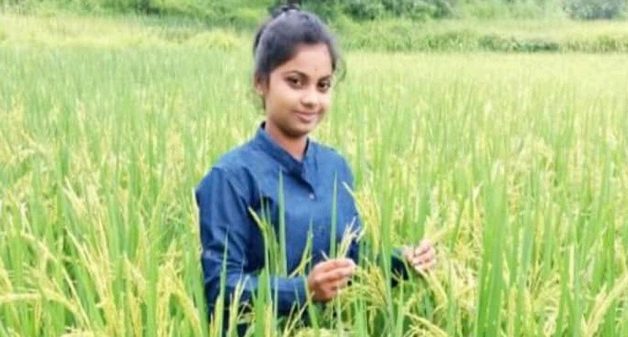 Sudhagad-Pali taluk is known for its Ballaleshwar Ganesha temple – one of the eight dedicated to Lord Ganesha in Maharashtra. The taluk in Raigad district is situated between Sarasgad mountain fort and Amba River which originates from the Sahyadri Hills. Come monsoon, the Amba habitually overflows its banks, flooding the farmlands of the marginal farmers in the region.

“On five occasions, between July and August my paddy field was submerged,” said Rasika Phatak (23) a farmer of Koladhare village in Sudhagad-Pali taluk. “The water was six feet high. And yet I was able to achieve a record harvest in 2019.”

Phatak’s 32-guntha (40 gunthas make an acre) farm plot is about 15 km from the famed temple. In 2019 she harvested 35,200 kg – a record harvest in the taluk in terms of per-hectare yield – because of the highly sustainable no-till, raised bed and direct sowing technique of cultivating paddy, called Saguna Rice Technique (SRT).

Most farmers in the districts of Ratnagiri, Sindhudurg, Raigad, Palghar and Thane traditionally grow just a single crop during the monsoon, which is usually paddy. In SRT, paddy is grown on a raised bed. The technique allows for growing subsequent crops on the same bed, without removing the paddy stubble. With SRT, farmers are able to grow three crops a year.

In Raigad district, while the traditional – ploughing and transplanting technique yields 4,500 kg per ha, it is 7,000 kg per ha through SRT. Given its advantage and suitability for small landholdings, more than 3,000 farmers practice SRT in 1,000 acres across Maharashtra, with more farmers embracing it every year.

Rasika Phatak is one of the farmers who has taken to SRT. Having succeeded, she now advocates SRT and other techniques and avenues to other farmers, to enhance their income. READ: Raigad farmers cultivate rice with less water

Hailing from a farming family, Phatak did a diploma in agriculture and later a bachelor’s degree from Yashwantrao Chavan Open University. The potential she saw in farming, and the success of many agricultural graduates in the Konkan region, prompted her to opt for it.

After her studies, Phatak worked as a farm hand for six years. “I did all kinds of farm-related jobs — from sowing crops to identifying pests, to driving a tractor, learning a lot in the process,” she told VillageSquare.in. Her farming background and her education helped her balance traditional practices and latest techniques well.

She redeemed her family’s land that had been mortgaged to meet financial needs. “In 2019, I raised the first crop in our land successfully,” said Phatak, dressed in a white shirt and a pair of jeans, standing in the midst of swaying paddy fields clothed in shades of green.

Having attended a workshop at Saguna Rice Foundation, a non-profit organization run by Shekhar Bhadsavle, an innovative farmer who introduced the Saguna Rice Technique, Phatak followed the same method in her field.

Following the harvest of paddy around October, Phatak plants vegetables among the stubble on the same bed. After the harvest of 90 to 120-day crop of vegetable, she cultivates pulses, thus growing three crops a year — an unheard-of practice in the region.

SRT is unique since the seeds are sowed in-situ and not transplanted. In-situ sowing enables the plants to get rooted well in the soil and hence withstand flooding. Phatak’s success has galvanized other farmers; presently 100-odd farmers in the taluk have adopted the SRT.

Every evening, on her way back home, she meets up with the womenfolk in their homes telling them about starting individual or cooperative ventures taking up vegetable cultivation, pappad making, pickle making or keeping one or two hens at home to secure the family’s nutritional security.

Even as she works in her farm, she keeps responding to queries from groups on a mobile messaging platform. Attending workshops conducted by government agricultural and related departments and other organizations working in the domain, helps her keep abreast of latest developments.

As a member of groups such as Green Aarmy, Krushimai Parivar, Sudhagad Bhatsheti, Konkan Farmer and others, Phatak reaches out to residents of about 100 villages and 234 settlements across 34 panchayatsof the taluk.

“I share information and advice about government schemes for farmers, new hybrid varieties of vegetables, pulses, etc., growing mushrooms, issues related to animal husbandry, poultry and the like,” said Phatak, who was felicitated for her achievement by the Panchayat Krishi Samiti.

The district of Raigad being close to the tourist town of Lonavala and urban centers like Panvel, Navi Mumbai, Thane and Mumbai, most landowners visit their villages during the paddy sowing season and return to the cities to resume their jobs as courier delivery boy, resident society watchman, restaurant cook, autorickshaw driver, plumber, tailor, etc.

Having witnessed the success stories of farmers such as Rasika Phatak, Sudhagad-Pali taluk is witnessing incidents of reverse migration. More so due to the pandemic lockdown. The villagers hold mai, as they address Phatak, in high regard.

“Mai has shown us that besides farming, one can have cattle for milk, grow mushrooms, etc.,” Bhaskar Pore (43), who worked as a cook in a Lonavala hotel for 15 years, told VillageSquare.in. He has returned to his village for good, and now grows paddy and vegetables on his three-acre plot using SRT and also supplies milk locally, thanks to the five buffaloes in his cattle shed.

An agriprenuer in her own right, Phatak has a licensed fertilizer shop and runs a plant nursery which provides fruit and vegetable saplings to local farmers and farmhouses that dot this taluka by the thousands. Unlike the commercial nurseries that are on the highways, she has located hers within the village so as to be of more use to the farmers.

For the farm houses and the orchards that belong to Mumbaikars, Phatak is their go-to person when it comes to plantation, establishing orchards, introducing new methods in farming, like the use of mulching sheets, raising shade net, making vermicompost and organic inputs, etc.

“Rasika has been a great help in selecting the right variety of fruit plants, installing drip irrigation systems and making one’s own fertilizer,” J D Gupta(52), a Mumbai-based transporter and owner of a two-acre farm in Kolamb village, told VillageSquare.in.

Commenting on Phatak’s role Ashok Choudhary, Panchayat Samiti Agriculture Officer, said “Besides introducing a new technique of growing paddy in the taluk Rasika has enriched livelihoods by showing farmers that one can keep the land engaged and grow three crops a year.”

With 4,600 ha under paddy cultivation in the taluk, of which barely 150 acres is now under SRT, district agriculture officials, such as Vikas Patil, joint director, Agriculture Department, Konkan Division see great hope in Phatak’s efforts.

He finds Phatak an industrious farmer, motivating the other farmers in the region to adopt new techniques and newer means of livelihood enhancement.  “She’s an excellent extension worker who works at the grassroots level,” Patil told VillageSquare.in.