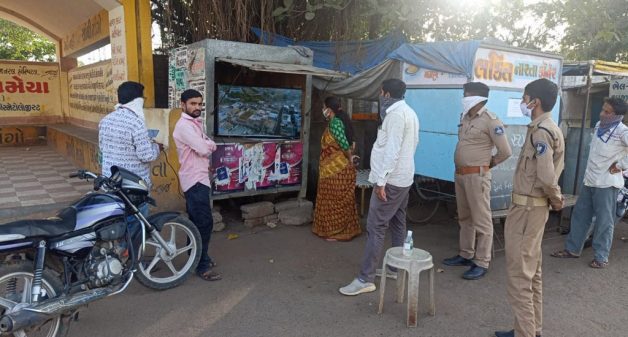 Kanku Ben Amritlal Vankar is the sarpanch or chief of Juth panchayat that consists of four villages – Kukma, Nani Reladi, Moti Reladi and Lear, in Kachchh district, Gujarat. She is also an award-winning artisan, who received a national award for her unique design in Toran art in 2011, from Pranab Mukherjee, the then President of India.

Kanku Ben comes from a family of artisans where education, girls’ education more so, was the least important thing. One big reason for that was the financial situation of her family. Secondly, the school in her village only catered to students until class VII.

One had to travel a long distance to study further. There were no free bus passes for girls then. “I started working with my parents, who were artisans. I was a good student, getting very good grades in school. So I decided that I’d become something (didn’t know what then) and will not let my children go through this,” Kanku Ben recalled.

She was an active member of the panchayat and used to be involved in various social welfare programs as a volunteer. Through her shop she was also helping women get handloom work and make a living.

When the panchayat was reserved for a person belonging to the Scheduled Caste category, she contested following requests from villagers. She has been a proactive chief ever since she was elected, handling the COVID-19 situation in her panchayat, besides taking steps to develop it.

When India went into an alert as the coronavirus spread and the lockdown was announced, Amritlal took immediate measures to stop the spread of the infection. Her first step was to be well informed about the disease with all its implications.

She recruited a team of 25 youth volunteers. Along with the home guards, they spread awareness about the disease and the preventive measures among villagers. CCTV cameras and drones were used to ensure that the villagers followed the rules.

She made arrangements to distribute masks to service providers such as shopkeepers, and volunteers, who were in direct contact with villagers. She made sure that public places were regularly sanitized.

Hundreds of daily wage earners and their families were stranded in the outskirts of Kukma village. The panchayat president coordinated with government departments and local non-governmental organizations and ensured that the stranded families received basic provisions.

While assessing the needs of the people, Kanku Ben came to know about the Devipujak community who made a living by making and selling brooms. Due to the lockdown, they couldn’t sell and thus had no income. She helped the community by making arrangements for sale of the brooms.

After the third lockdown was declared in early May, and with the rules getting a bit relaxed, she ensured safe travel passage for migrants returning from other places. She got them tested on arrival and took appropriate measures as per results.

Kanku Ben advocates education for girls. She decided to lead by example. “I made sure that my daughter would complete her school education by going out of the village and I sent her out of Bhuj to complete her higher studies,” she said. “This was not a unanimous decision in the family but I was determined.”

A street in Kukma is named after a girl, a school topper. Amritlal asked why every street and building should be named after a rajah or a politician. According to her, the impact of this action has been positive and that girls feel encouraged to achieve.

“Recently, a women’s commission sent a suggestion in favor of naming streets by the local girls’ names to motivate them. It feels great that different departments are thinking of something that’s already being done in our villages,” she said.

The village had a vacant land where people threw their garbage. It had become very polluted causing illnesses and rise in dengue cases. It was also harmful for the environment. Some people tried to encroach upon the land. So Kanku Ben decided to take action.

After taking permission from the government and following necessary legal procedures, she and her team brought the land under the panchayat. They converted the dumping ground into a women’s park. It happened in January and so in commemoration of the birth anniversary of Savitri Bai Phule, they named the park after her.

Villagers did not know who Phule was. “I felt that it was the right time to make people aware of her contribution to women’s education and empowerment. We organized a session to talk about Phule,” she said. “Now this has become a landmark. People living nearby identify themselves as the residents of women’s park area.”

Kanku Ben has facedquite a few social and administrative challenges. She cited lack of support from some officials and also frequent transfer of panchayat secretary as hurdles in maintaining records and effective coordination.

“Social change is a long, continuous process. People do understand and improve their practices if it is communicated properly at a personal level. Any social change is possible only from within the society. Therefore, people of the village should always be the driving force,” she said.

“My vision is the same as that of Baba Bhim Rao Ambedkar,” said Kanku Ben. “I wish to bring people together, where all the communities are represented equally. Education is important to me. I want to ensure that no one is left behind because of reasons that could be addressed by the panchayat and other government departments.”

Md. Faraz Ahmad is a 2019 India Fellow. He works with SETU Abhiyan in Bhuj, Gujarat as a part of his fellowship, in training and documentation to strengthen rural and urban governance.

Anupama Pain is the co-founder of India Fellow Social Leadership Program, working towards creating socially conscious leaders in all walks of life. Views are personal.