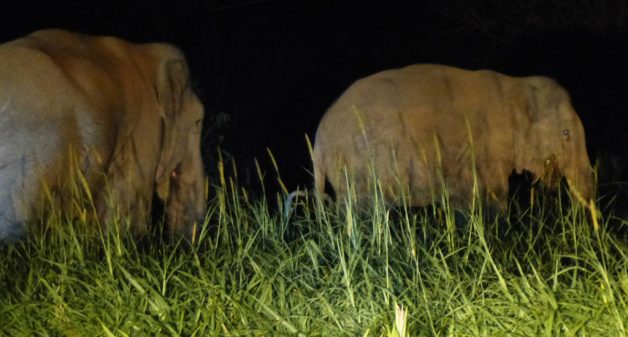 Andhra Pradesh, known for its lush paddy fields in the fertile Godavari basin, does not figure much in the discussions on human-elephant conflicts in India. Frequent crop raids by male elephants are becoming common in the state, giving farmers sleepless nights. On the other hand, there are electrocution deaths of the animals, as farmers make desperate attempts to protect their crops at all costs.

Andhra Pradesh did not have elephants for the past 200 years, but the animals started re-colonizing the state in the last 30 years. A herd entered the southern region of Andhra Pradesh from the Hosur-Dharmapuri forest divisions of Tamil Nadu during the early 1980s. Over the years, a lot of young male elephants kept out of herds started entering the state.

“A severe drought may have driven the animals towards Andhra in search of food. Overpopulation is another reason why elephants entered southern Andhra,” said Rakesh Kalva, a research associate with the Pune-based Wildlife Research and Conservation Society (WRCS).

“In Karnataka and Tamil Nadu, conservation has been highly successful, leading to an increase in the number of elephants. But as the forest area remained the same, the animals had to search for a new place,” he said. The non-profit is running a five-year project (2016-21) in Andhra Pradesh to tackle the human-elephant crisis.

Around 2000, northern Andhra Pradesh that shares borders with Odisha and Jharkhand, witnessed the entry of elephants from these two states. The animals, driven out due to disturbance caused by iron ore mining along the Jharkhand-Odisha border moved mainly into Srikakulam district. According to Kalva, the six elephants in Vizianagaram district and four in Srikakulam now, migrated from Odisha.

Odisha-based expert Rudra Mahapatra, who works with the Wildlife Trust of India, said that the animals enter Andhra from Jeypore in Koraput and Rayagada districts of Odisha. This region forms a section of the Eastern Ghats.

“Andhra never had elephants. But the animals are in search of new territories due to habitat fragmentation. They are no longer following their traditional movement paths,” Mahapatra told VillageSquare.in.

As male elephants are solitary, they search for new areas, once driven out of herds, said Mahapatra. In fact, there is a continuous elephant movement between Odisha and Andhra. Sometimes, two or three sub-adults form a group and display a lot of aggression.

“Odisha elephants were forced to cross the Mahanadi and enter Andhra,” D S Srivastava, Jharkhand-based wildlife expert, told VillageSquare.in. “Iron ore mining and the creation of highways in Odisha destroyed forests and damaged the elephants’ traditional migratory routes. So, the entire Odisha population has been disturbed.”

Since 2014, there have been crop raid reports in the southern part of Andhra Pradesh, especially Chittoor, bordering Karnataka and Tamil Nadu.

Kolkata-based wildlife biologist Aritra Kshettry agreed that elephant movement in Andhra Pradesh is fairly recent. “In many places, elephants are now found as they have expanded their range and Andhra is one of them,” Kshettry told VillageSquare.in.

“Even in Madhya Pradesh, elephants have moved in recently. In Andhra, the Koundinya Wildlife Sanctuary located in Palamaner-Kuppam forest ranges of Chittoor district is not an ideal habitat to sustain elephant population. So, the animals have no choice but to depend on agricultural crops,” said Kshettry.

In southern Andhra, there are 65 elephants and they constantly raid fields of ragi, vegetables and mangoes. According to Kalva, these male elephants are at high risk of dying as they are spotted daily in human habitats.

“We have been facing crop raids by elephants from 1995 onwards in Chittoor. All farmers here grow horticultural crops and a little bit of paddy,” MM Reddy, the forest range officer of Kuppam range, told VillageSquare.in. “There have also been two human casualties in September.”

Danapal Katlollu, a farmer of Musalimadugu village in Chittoor, owns two acres of farm lands. He grows paddy during the monsoon and vegetables at other times. The village is a hotspot for crop raids.

“Crop raids are a huge problem. The forest department has employed five trackers from the village. We also keep watch at night. During summers, when there is water scarcity in Koundinya Wildlife Sanctuary, elephants often damage bore well pipes. It is an additional loss for us apart from crops,” Katlollu told VillageSquare.in.

However, there was a decline in 2016-17 with 48 cases, according to The Future of Elephants in Andhra Pradesh, a project report submitted by Kalva to the forest department in 2019. This was due to good monsoon and sufficient resource availability for the elephants in their habitats.

According to Ananda Kumar, scientist at Mysuru-based Nature Conservation Foundation, male elephants often migrate for long distances and pass through agricultural fields. So, damage to crops is common. Another thing to be considered in this regard is that the home range and the area of movement for herds and for males are different.

Through community awareness programs, farmers are being urged not to consider elephants as a menace. Consultations are on with farmers regarding the possible cultivation of crops that elephantsdo not consume. Forest department officials are being trained in elephant management.

There are 30 trackers in Kuppam and 25 in Palamaner ranges to drive away elephants. Shankar, a tracker in Musalimadugu, enters forests during the day to find out the location of the animals and keeps vigil at night at the border between forests and farmlands. He uses crackers to drive the animals away. Shankar said that a tracker died and another was severely injured while on duty, adding that it is a risky job.

As the animals constantly raid crop fields, there is a high risk of them dying due to electrocution. In 2019, five male elephants were electrocuted. The males do not budge even if driven away by farmers. As they do not have a herd to take care of, they more daring, Kalva explained.

In South Andhra, 80% of elephant deaths occur due to electricity wires. As the elephants raid the fields at night, they fail to see the wires which remain dangling most of the time.

To prevent electrocution deaths of elephants as a result of tilted electricity poles constructed on loose soil, the forest department has sought the support of electricity board. As a result, the height of the wires is being adjusted in many places.

A 10-feet deep elephant-proof trench runs for almost 250 km along the Koundinya Wildlife Sanctuary. “The trench is working because there is minimal erosion due to low rainfall. So, the life of the trench is long here compared to the other areas,” said Kalva.

Ravi Shankar said that the Karnataka and Tamil Nadu forest departments must also set up elephant-proof trenches so that there is obstruction, and elephant movement across the border is cut off.

The Future of Elephants in Andhra Pradesh report says there is relatively good forest cover in Koundinya Wildlife Sanctuary and the Sri Venkateshwara National Park. So, allowing the animals to pass through these forests will reduce conflicts in both Andhra Pradesh and Tamil Nadu.

However, Koundinya is a narrow stretch of forest. When it was declared a wildlife sanctuary in 1990, spread over 357.6 sq km, the state government did not take the ecology of elephants into consideration, said Kalva.

India is home to 27,000 elephants, according to the census conducted in 2017. But no one is serious about elephant management in the country, Srivastava rued. “Commonly, locals are provided some kind of measures and only the conflict part is taken care of. However, no single state has solid management action plan,” he said.

“Trenches and electric fences are old methods and temporary in nature. These are created with huge amounts of money and last for six months or a year. States have to go in for permanent measures like creation of suitable habitats. Action plan must have short-term and long-term measures. Unless forests are created, elephants will continue to raid villages,” he said.