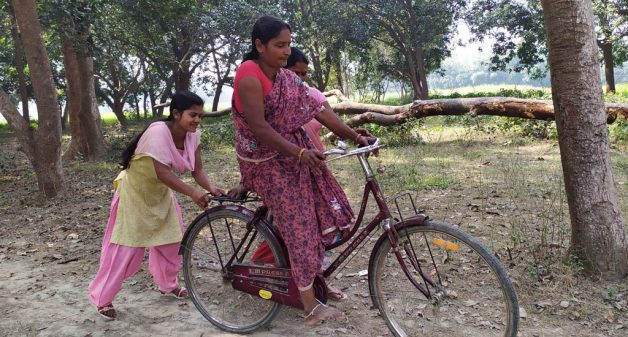 Shashikala Devi, an accredited social health activist (ASHA) started walking towards the primary health center (PHC), as soon as the clock struck 11. She could not convince her 16-year-old son to be home as soon as his tuitions got over, so that he could drop her. With no other option, she walked along 8 km of dust-filled roads to the PHC, and once again had to go through the humiliation of being late for work.

Shashikala Devi lives in Shivajinagar administrative block of Samastipur district in Bihar. She is the ASHA of an administrative ward in Dahiyar panchayat. Functioning as an interface between more than 1,000 residents in her ward and the public health system, she has to travel to the PHC periodically.

For Rinku Devi, the only mode of transport to her PHC in Hasanpur is a local train. She has to finish her chores by 8 am to catch the 9 am train to Hasanpur. From the railway station, she has to walk for 2 km to reach the PHC. She must finish her work by 2.30 pm to catch the return train at 3 pm, which she often misses, and has to wait till 7 pm to catch the next train, which is also the last.

Constrained mobility bears a multifaceted impact upon the overarching aim of empowerment of ASHAs. Teaching them to ride a bicycle so that they could reach their work destinations easily and on time, is having a positive impact on their lives.

The stories of Shashikala Devi and Rinku Devi are not an anomaly but a norm for more than 70% ASHAs working in Samastipur. Some wait for their sons or husband to give them a ride to work or resign themselves to walking more than 15 km every day.

Depending on public transport is not an option for many as the public transport network in rural Bihar is limited and unreliable. Even if transport services are accessible to some, there are concerns regarding the safety of women. ASHAs often complain that depending on others for basic movement not only dampens their self-worth but also their quality of work and opportunities of growth.

Innovators in Health (IIH), a grassroots public health organization founded by the alumni of Massachusetts Institute of Technology, works with ASHAs to strengthen the National Tuberculosis Elimination Program, an initiative of the Government of India to free the country of tuberculosis.

Being a close witness to the plight of ASHAs, the IIH team decided to address these constraints of mobility to truly empower them. IIH is trying to establish freedom of mobility by training the ASHAs to ride bicycles.

Bicycles have been linked to empowerment of women since their invention in the late 1800s. In rural Bihar, cycling is considered a man’s domain, and the sight of a middle-aged woman riding a cycle is unthinkable. Women thought it was impractical.

In Bihar, the Mukhyamantri Balika Cycle Yojana, or chief minister’s cycle scheme, meant for female school students played out a significant role in getting girls to use bicycles. This led the IIH team to choose young girls to train the ASHAs. It not only ensures the comfort of ASHAs during training but also promotes permeation of the revolution mutually.

IIH invited 22 ASHAs for a meeting, for which 17 came. The meeting was initiated with an experience sharing exercise around their challenges with respect to mobility. This led to ideas for addressing the issue and the IIH team proposed bicycle training. There was a hesitant smile on everyone’s face accompanied by disbelief.

The vocal ones questioned the feasibility of learning to cycle wearing a saree, as it might make pedaling difficult. Some of the other concerns were where they would learn, who would teach them, if IIH would give them bicycles for learning, how men would react seeing the women learning to ride, and the like.

The IIH team and the ASHAs tried finding answers to these questions together and finally decided that adolescent girls could train the women. The girls would teach the ASHAs at noon when they are almost done with work and the other villagers rested. For practice, the team chose two places that men did not frequent.

Girls from poor families who learned to ride a cycle on their own and owned one provided by the government were roped in. The girls devoted an hour or so after school and were compensated for their efforts. Each girl trained two ASHAs.

Taking to the road

Out of 17 ASHAs who attended the meeting, 14 signed up for the training, and 11 came on the first day of training. The first day started with various challenges, due to which the team had to change the training ground, but eventually, it was a successful start.

IIH is conducting mobility training in four administrative blocks of Samastipur, the area that has 800 active ASHAa. Starting in Feb 2020, IIH enrolled 143 ASHAs out of which 103 have successfully completed the training.

The IIH team was worried about the issues that were likely to crop up when the women moved from the secluded training grounds to the roads where other vehicles plied. But 11 of the ASHAs started using bicycles on the roads confidently.

The ASHAs managed to learn in and use the already available cycles at their home. As a widow solely responsible for her family, Urmila Devi of Shivajinagar often thought of learning to ride a bicycle as it would cut the costs of her travel.

“I have been able to save a substantial amount of money since I started using the cycle,” said Urmila Devi. For Amrita Devi, the cycle has been a life savior during the lockdown as all modes of transport came to a standstill.

Soniya Devi, an ASHA from Sarairanjan block bought a scooter with her savings. Soniya had a long desire for riding a scooter but couldn’t convince her family to teach her to do so. Training facilitated by Anju, a field coordinator, helped in fulfilling her dream.

“I don’t have to wait for my husband to drive me to the PHC, and the work that used to take four hours takes only two hours now,” said Soniya Devi. “My supervisor keeps saying that others should learn by my work and punctuality.” The IIH team that initiated this hopes that the other ASHAs would also learn so that they can carry out their work effectively.

Smriti Ridhi holds a Bachelor in Dental Surgery from MAHE, Manipal. She works as a Project Manager in Innovators In Health, India, leading the efforts to improve the quality of care for TB patients in the private sector.