Switching from conventional farming, a farmer who discovered the benefits of organic and biodynamic farming, has converted his farm into a workshop to train people in sustainable cultivation 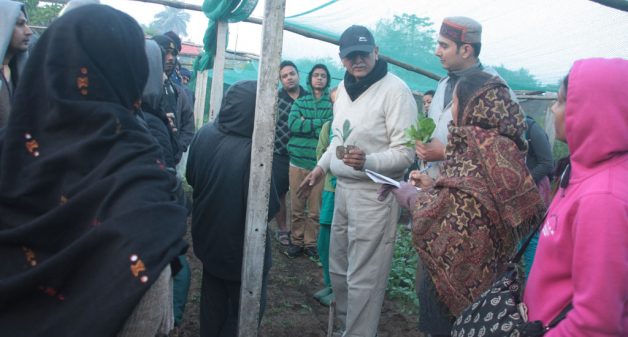 Bhaikaka Krishi Kendra, located in Ravipura village of Petlad taluk in Anand district, is an organic farm and outreach center. Here, Sarvdaman Patel has been farming 40 acres of land, growing a variety of crops using biodynamic principles for the past 20 years.

His farm has been serving as a training ground and a space for workshops. A shaded, semi-circular area, dotted with benches made from 100-odd-year-old trees from the farm, provide an ideal space for training sessions.

“Peter took many classes here,” recalled Patel, referring to Peter Proctor, widely considered as the father of modern biodynamic farming. He stayed on the farm for almost a year in 2005 and helped it align with biodynamic principles along with other experts such as Rachel Pomeroy.

Patel has conducted a number of training programs since 2006 for a variety of audiences ranging from officials of different institutions, national and international individuals, and tribal groups from remote areas. He has trained over a 1,000 individuals in organic and biodynamic farming.

Patel and Shahzad, an intern working with him for the past three months, show visitors the efforts needed to rejuvenate the land. Patel’s love for the land matches his enthusiasm to teach others. Affectionately known as Mota bhai, he envisions the space as a community hub for farming using biodynamic principles.

Patel did his bachelors in agriculture and animal husbandry from G B Pant Agricultural University, followed by a masters in agronomy at University of Wisconsin-Madison, USA.

Eager to put his knowledge into practice, he bought 32 acres of land at Ravipura with the help of his father. He started farming using conventional methods in the late 1970s, as was prevalent then. However, by the late 1990s he realized that the farm yields were falling despite increased use of pesticides and fertilizers.

Experiments to grow vegetables on a larger patch of land using organic methods also did not pan out well. So he decided to undergo formal training and began reading about various organic practices. Slowly he began to see results and has been constantly building on his learnings and experiences at the farm, eventually increasing the land size to 40 acres.

“The organic carbon content or soil organic matter (SOM) in the soil has fallen below 0.5% in many areas in India, being as low as 0.3% in Punjab. After several years of following ground cropping techniques, and mulching the soil, the SOM here is about 1.42%.

“Every 0.5% rise corresponds to approximately four times increase in water absorption. Increasing water holding capacity and microbial content in the soil marks the beginning of a healthy farm,” said Patel.

Rattan Lal, who recently received the World Food Prize, commented that we are entering a ‘peak soil’ moment, where it may be impossible to revive soil fertility unless concerted efforts are made to increase organic matter in soil.

In recent years, methods of land management to increase SOM have been considered as effective ways to store atmospheric carbon. 40 acres of diverse vegetation, and rich soil stand testimony to Patel’s understanding of these interconnections.

Apart from farming, Patel has also overseen the plantation of over five lakh native trees across Gujarat and Rajasthan to prevent soil erosion.

Patel grows a variety of cover crops such as sunhemp, cluster beans, sorghum and cowpea amongst others. He grows the crops throughout the year, to help in nitrogen fixing, and add biomass to the soil in the form of mulch when the crops are cut at different stages.

Each patch of land has a unique microclimate depending on the arrangement of crops growing in the area. Despite a number of unwanted visitors on the farm in the form of raiding groups of monkeys, wild pigs and even neighboring farmers looking for fodder, Patel has devised ways of growing crops on almost every inch of the land, using even the borders and trenches.

This work is labor-intensive and requires close attention to the varying soil conditions on the land. While the full-time staff of 15 people – who are mostly tribes from Madhya Pradesh – are quite satisfied with the fair working and living conditions, finding labor has been a constant challenge for him.

“Over the years, a lot of helpers left the farm in search of better opportunities. We also had to shut down a small shop we had opened on the main road to sell our produce. So, I have opted for more woodlands and fruit orchards rather than having too much area under vegetables and grains,” said Patel.

Patel has about 35 cattle and he grows fodder for them on the farm. Though he has not got his farm certified as organic, over the years he has developed a loyal clientele who are quite satisfied with the farm produce and the milk quality.

A gurukul in the making

“A lot of us owe our entire perspective of farming systems to him. It is not just about techniques. He teaches you about the culture in agriculture,” said Ashish Gupta, a student of Bhaikaka Krishi Kendra, and co-founder of Gram Disha Trust.

IFOAM-Asia conferred the Lifetime Achievement Award to Patel in 2016, in recognition of his sustained efforts to create a new generation of farmers practicing regenerative agriculture.

Patel wishes to eventually convert his entire farm into a gurukul. Senior apprentice Ravi Kaushik has been facilitating short-term and long-term internships at the farm and helping establish the gurukul. Once in place, the gurukul would continue to train many thousands more in sustainable agriculture.

Deborah Dutta is a senior research fellow, and Vandana Ravichandran is a research associate in the ‘Living Farm Incomes: Inequality, Sustainability and Civic Action in India’ project at the Institute of Rural Management, Anand (IRMA).