Varied activities in the residential farm helps those with intellectual disabilities calm down and learn many social and life skills, besides offering a livelihood 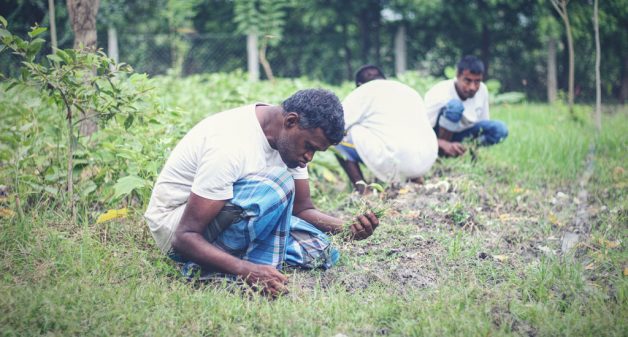 Farming helps the intellectually challenged learn life skills and as a therapy, calming them down (Photo by Balasubramaniam. N)

Hasija Nachiar, a single mother, had travelled for four hours to visit her son Faazil (27) living in Sristi village, a residential farm-based program meant for intellectually challenged adults. Despite the lockdown, she could not take him home.

“I would need a male to control him when he has one of his violent outbursts. So I can take him home only in December, when my brother would be visiting us,” she said. When she visited, Faazil was gallivanting around Sristi, with his friends who also stay in the facility.

It was in 2013 that psychologist G. Karthikeyan initiated Sristi village as an inclusive farm-based community for intellectually disabled adults. Having grown up in an orphanage, he had seen many people like himself, study, find a job, move out and lead an independent life.

“But some of my friends were left behind. No one was ready to employ them as they had intellectual disabilities,” he recalled. He knew them as individuals with distinct personalities and desires. He also felt that they would not want to live their entire life on someone’s charity.

Towards this end, he started Sristi village, where he decided to offer basic education and life skills training to intellectually challenged adults. As part of his efforts, he introduced farming as a means of therapy and livelihood.

To make the intellectually disabled as independent as possible, Karthikeyan began to research on the occupations which suited them and would develop their social skills. He had asked some of his friends to try a kitchen garden at Sristi. “When the day of harvest came, there was an immense sense of pride in them. After all, it was their own produce,” said Karthikeyan.

It was after this small experiment that he decided to set up a self-sustainable residential farm for intellectually disabled people. With some seed funding from Kanthari, a non-governmental organization, he bought a 8.93 acre farmland in Thazhuthali village in Villupuram district.

The land was heavily degraded and Karthikeyan recalled how their efforts to grow anything on it failed. Their attempts to dig a well for water too didn’t work. The future looked stark. On the one hand, he had an infertile land and on the other were his friends who were misfits in the outside world.

“When our first attempt at growing vegetables failed, I asked the local villagers and learnt that millets were native to this area,” said Karthikeyan. He and the residents took help from a local villager and soon enough, they had millets growing well.

Native trees helped rejuvenate the soil. “With trees came birds, and the biodiversity of our farm increased. The dry leaves helped in mulching our farm and the soil became fertile,” he said. “These trees also acted as wind breaks and ensured that moisture was retained in the soil. Soon our wells had water.”

In seven years, the dry barren land has blossomed into life with vegetable patches, fruit forests, wells, ponds and a dairy farm. So have the residents. Kaali, one of the residents, who used to stand in a corner and stare, was belting out a film song. Another offered visitors the papaya fruits he had grown.

There are more than 30 adults (aged 18 – 40) in the residential farm and most of them come from rural and economically downtrodden families. Some are orphans. Karthikeyan said that farming works two-fold – as an opportunity for them to grow and sell their own food, and also as a natural therapy for their mind.

While the vegetable and fruit forests feed and sustain the residents of Sristi, their dairy farm has turned into an income-generating opportunity. They sell nearly 20 liters every day, after catering to Sristi’s residents. Plans are afoot to make more dairy products like ghee, butter, etc.

The residents are divided into five families, with one special educator in each group. The families take turns to do various activities like dairy work, cleaning campus, composting, handling vegetable garden or fruit forest. “Unlike schools or college, this imparts indirect life skills training to them,” said Karthikeyan.

“Our residents not only learn farm skills but also learn how to develop their social skills, team work, leadership quality, time management and even money concept by learning to sell their produce, while living in this community farm,” he said.

Ebin Navis, who interned at Sristi during his masters in social work in 2018, now works as an independent researcher in the farm. “I am trying to understand the impact of community living on disabled people and also on how such a model can be replicated elsewhere,” said Navis.

“Only 34 lakh of 134 lakh disabled people are employed in India. So, it would be useful to document how community-based farm training could help people with different levels of intellectual disability reach their potential,” he said.

Farm trainer Sekar Saran (34) is not a target-oriented farmer. “People are our priority and so we let students choose what they like to do in the farm. They do have a structured program that begins at 5 am with yoga, language, maths classes, etc.”

According to Saran they love the outdoor farm classes the most. “One can literally see how therapeutic and transformative the farm is on our boys. For instance, Arun who rarely communicates, is very comfortable with cows,” he said.

Karthikeyan said that Faazil has calmed down a lot now and is of great help in the dairy farm. “He knows how to clean the farm and feed the cows. He tried his hand in the vegetable patch too but is yet to understand the difference between a weed and a sapling,” he said.

“Kaali, who used to have extreme mood swings, is now showing great leadership skills. If you give him a piece of land, he would have his own ideas on how to work the field. Soft-natured Senthil, another resident, plays his perfect partner, following his instructions to a T,” said Saran.

Saran said that they play to each other’s strength and weakness whilst working on their vegetable patch. Kaali even managed to grow his own batch of saplings, setting up a mini nursery within Sristi. “One day he hopes to move out and start his own nursery and I believe he will,” he said.