Given the demand for brahmi in national and international pharma and nutraceutical markets, farmers in Sagar Island are switching from paddy to organic brahmi cultivation and getting good financial returns 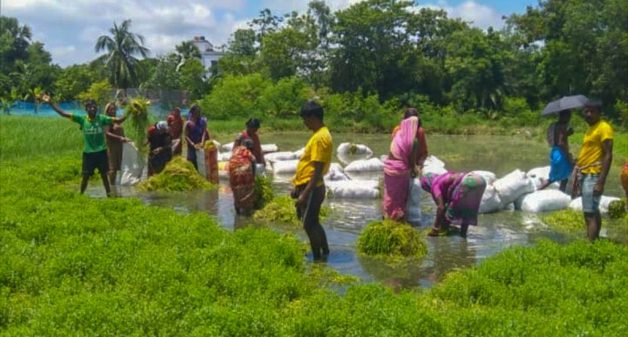 For generations, farmers in Sagar Island, as elsewhere in the state of West Bengal, have been growing paddy on their small patches of land, eking out a living. But lately they have found a replacement in brahmi (Bacopa monnieri), a medicinal herb that ushers in income enhancement and livelihood security.

A small succulent herb with numerous branches, brahmi grows naturally in wet soil, shallow water and marshes. The herb has a long history of use in enhancing memory and cognition, and is classified as a medha rasayana – drug used to improve memory and intellect – in Ayurveda.

Brahmi is believed to have been used by ancient Vedic scholars to memorize lengthy sacred hymns and scriptures. The presence of bacosides, a class of chemical compounds, in brahmi, increases the cerebral blood flow and hence largely used as brain health supplement, especially in the treatment of Alzheimer’s disease. It finds various other medicinal uses.

State Medicinal Plants Board, West Bengal introduced brahmi as a crop in 2016 in village Bakhhali in Namkhana administrative block. Two years later farmers in Sagar Island took to growing brahmi. Presently it is grown in 450 acres in Sagar Island.

In Namkhana block, the herb is grown in 150 acres. Though most farmers here are engaged in the cultivation of paddy and betel vine, more and more farmers are shifting to brahmi cultivation, as the returns are very remunerative.

Known locally as Gangasagar due to River Ganges flowing from the Himalayas and into the Bay of Bengal, Sagar Island has become a holy site for Hindus and a famous pilgrim center. During Makar Sankranti, the harvest festival celebrated in January, lakhs of pilgrims throng the island to take a holy dip in the Ganges.

Home to about 40,000 families in 47 villages spread over 504 sq km, most of the inhabitants are engaged in paddy and betel vine cultivation. Majority of the families own an acre (3 bighas) at the most, with a small pond used to collect rainwater for use during the rabi (mid-November) season.

Apart from growing fish, the ponds are also useful for rearing ducks. In addition to paddy during kharif (early May), they grow several vegetables and a local variety of pulses for the rabi.

Sagar Island farmers were in the news recently for being granted plant protection rights by Protection of Plant Varieties and Farmers Rights Authority for conserving Kanakchur and Hirankhuri, endangered aromatic rice varieties.

However, with every year more and more farmers shift from paddy to brahmi cultivation, due to poor returns from paddy. For paddy fetches the farmers around Rs 2,000 per bigha including kharif and rabi while the returns from brahmi is Rs 20,000 to Rs 25,000 per bigha for four crops in a year.

Sagar Island is one of the 54 inhabited islands in Sunderbans and is characterized by mangrove swamps, waterways and small rivers. It also shares the risk of coastal flooding and coastal erosion. Embankment breaches caused by river and sea, tidal surges, salinity and disappearing mangroves are common here.

The topography and agroclimatic conditions make Sagar Island very congenial for growing brahmi. The state’s State Medicinal Plants Board (SMPB), had sourced brahmi from 40 different locations in the state.

“We found high levels of phytochemicals in samples collected from South 24 Parganas, mainly Sagar Island, making it most suitable for cultivating the herb due to the presence of salt in the soil due, thanks to proximity to the sea and frequent marine inundation,” said Prasanta Kumar Sarkar, director of SMPB, West Bengal.

After the land is made ready, it is left for two days for weathering. On the third day cuttings of brahmi are broadcasted on the field followed by moving the pata (two pieces of bamboo placed horizontally conjoined with two sticks on the sides) which helps the same to be spread evenly.

The land is irrigated continuously for 3 to 4 days which leads to the appearance of buds. Following the inundation with water, the aal (embankment) is sealed to prevent runoff.

For the last one decade, Pradip Kumar Ray (66) has been visiting the Sagar Island every week, covering a distance of 135 km covered by train, bus, ferry and bike taking close to six hours. He is a mentor and agronomist consultant to the farmers engaged in the cultivation of brahmi.

“As brahmi is used in the manufacture of drugs we have ensured that the farmers use only organic methods of cultivation using dry cow dung and vermicompost as manure,” Pradip Kumar Ray told VillageSquare.in.

The advantages of growing brahmi compared to paddy is not only pecuniary but sustainable too as only organic fertilizers are used; and as the crop is rarely attacked by pests there is no use of pesticide.

Unlike paddy which is harvested after 120 to 140 days, the maiden harvest of brahmi is done within 90days of sowing, followed by additional three harvests. The crop continues to stand on the field for close to four years.

Prior to SMPB’s initiative, pharmaceutical companies sourced dried brahmi from Kolkata’s Bara Bazar that were highly contaminated with pesticides. This led the officials of SMPB seek the support of NGOs working among farmers, to take up cultivation of the herb using organic methods.

Sagar Krishi Unnayan Cluster, an NGO, has farmers of 15 villages as its members and 200 acres under its fold. Another non-profit organization involved in popularizing the cultivation of brahmi here is Swami Vivekananda Youth Cultural Society.

“While men do the sowing and harvesting, women of the household take care of activities like sun-drying the herb and packaging them in clean and virgin plastic bags to prevent contamination and retain its medicinal value,” said Debashish Patra (38), secretary, Sagar Krishi Unnayan Cluster. It is dried by spreading on clean area or sheets in the sun for four to five days, followed by shade drying for another week.

The dried material is stored in clean containers and sent to pharma companies in Mumbai, Bengaluru and Vijayawada to be processed for international buyers.

Of the several buyers Lal Hingorani, chairman and managing director of Pharmanza Herbal Pvt. Ltd. is one. He has been sourcing brahmi from Sagar Islands since 2014 and considers himself a beneficiary of the quality herb grown here.

Even before it was introduced as a crop, villagers collected brahmi that grows naturally in marshy areas and sold the same. “In those days brahmi used to grow in the wild. Following the paddy harvest, farmers collected it,” Hingorani told VillageSquare.in.

“But now as it is cultivated we are able to acquire good material,” said Hingorani, who exports bacosides to the USA and European nations. “Soon we will be able to guide the farmers on the right period of harvest so as to ensure high levels of bacosides.”

The success of Sagar Island farmers shows that medicinal and aromatic plant-based cropping systems can usher significantly higher profits for growers compared to traditional crops. More so when the brain-health-wellness property of the herb makes it a unique product of its type in the nutraceutical market, especially in northern America and Europe, where the demand for natural products is witnessing an increase. Besides, it fulfills the needs of 10 major Indian Ayurvedic companies.

Soon Brahmi growers of Sagar Island will have their own warehouse as the state government has released funds for the same. “We are hoping the warehouse to be ready by March 2021,” Sarkar told VillageSquare.in. “The facility will ensure that the farmers do not go back to growing paddy due to lack of such facilities.”