With sales dwindling to a low during the lockdown, artisans who undertake skilled embroidery, have been forced to shutter workshops and switch to other means of livelihood 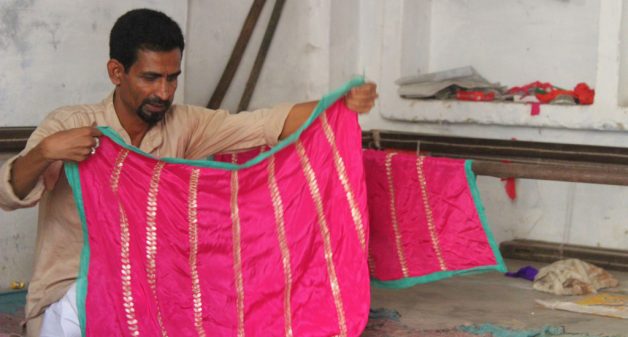 Sarfaraz Hussain, a zardozi artisan, showing the last piece in his workshop, has been selling vegetables, to feed his family (Photo by Jigyasa Mishra)

“These hands were meant for zardozi craft, but now they are compelled to sell vegetables,” said Sarfaraz Hussain, while selling vegetables. The 43-year-old has been doing zardozi art for the past two decades. But the closure of the market, following nationwide lockdown in March, has forced him to change his profession.

Hussain was planning to take another loan from a member of his extended family. “But I realized that I should take up some other job,” he said, with discontentment writ large on his face. “The pandemic has made me a vegetable seller. I am not a karigar (artisan) anymore.”

Zardozi is a special kind of embroidery done in Lucknow region with metallic threads, sequins and special needles. Artisans in Lucknow, the Uttar Pradesh capital, and neighboring district Unnao, who do zari and other forms of embroidery, seem to have lost all hope in their craft and have opted for alternative options to make ends meet.

Chowk area of Old Lucknow is known for its local cuisine and handicraft which includes aari, zardozi and chikankari which make Lucknow stand out in the fashion map. From artisans to wholesale and retail market, Chowk is a hub for all. It is also where Sarfaraz Hussain was born and brought up.

Now a father of three school-going children, Hussain said that his parents were also zardozi artisans. “I grew up seeing my parents and uncles do aari-zardozi work all the time. They would work all day and night, by the light of lanterns and sell it to the wholesale shopkeepers,” said Hussain.

“I learnt the basics of the craft, by watching them at work. I would have been barely 15 when I started to help them in filling the motifs,” Hussain told VillageSquare.in. “I had dropped out of school by then. Probably after class VIII.”

Hussain earned about Rs 15,000 a month, through different orders. His customers would demand specific colors and motifs of their choice and he made it the way they wanted. “More than money, it was a work of honor for us,” he said. Most of his clients were shopkeepers who sell in Gol Darwaza, one of the landmarks of Lucknow city.

Hussain stopped getting orders from the first week of March. “We started using our savings. But little did we know that the situation would worsen,” he said. “In May we had used up half of Rs 10,000 borrowed from a relative. That’s when, in the month of May, I opted for selling vegetables.”

Hussain’s wife is a homemaker while his three sons study in the government school. There is only one smart phone in the family which is why his children have not been up to date with their online home works.

Sarfaraz Hussain is not alone to quit his family profession and take up another work to make ends meet. “Zardozi artisans used to earn between Rs 10,000 and Rs 20,000 per month, depending upon their quality and quantity of work,” Mohammad Iqbal, an artisan from Unnao, told VillageSquare.in.

62-year-old Mohammad Iqbal ran a little workshop of zardozi artisans by renting a hall in Unnao. In April Iqbal had no option but to ask the workers to leave until further notice. “They used to come from nearby villages. A couple of them had rented rooms nearby,” he said. “Without a single order to work on, how could I have paid them?”

Iqbal lives in a rented house in Unnao with his son, daughter-in-law and their children. The rent for the past three months is still due. “You see, even I am looking for an alternate occupation. I have got zero orders since March. Whom do we work for now?”

Chand, another zari zardozi artisan from Chowk is now ferrying people in an e-rickshaw as a result of poverty. “What do we do with the art if it doesn’t feed us? By plying a rickshaw I can at least take care of my family’s needs,” Chand told VillageSquare.in.

Apart from Chowk, Hazratganj and Aminabad are the other areas of Lucknow that customers visit in search of Lakhnavi handicraft. That’s where most of the retail shops and showrooms are.

“We are getting 70-80% lesser customers for chikankari and zardozi this festive and wedding season. I believe, online shopping is one reason for many in avoiding stepping out this time. Since there’s lesser demand, there would definitely be lesser production,” said Zunaid Ali, a shopkeeper from Aminabad area of old Lucknow.

Sunidhi Saxena, a Lucknow-based designer who uses aari, zardozi and chikankari in her works said that chikankari is still in a better position while aari and zardozi artisans are in a very bad state.

“Whenever I prepared for exhibitions or fashion shows, these artisans have been my right hands. But I doubt their beautiful and hard work is getting the appreciation and respect it deserves,” Saxena told VillageSquare.in.

“I know no work is big or small. But you can’t feel the same for your profession what you feel for your passion. I can only wish and pray to Allah that things get back to normal and I may stop roaming in the lanes with these vegetables,” said Hussain.