With an increase in awareness of various health benefits of camel milk, its sale has increased, boosting rural economy and livelihood of traditional camel herders 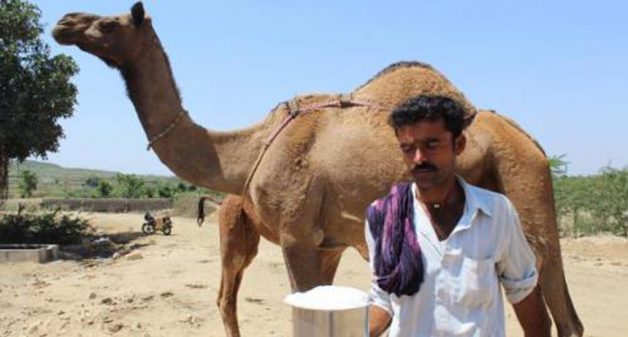 With an increase in demand for camel milk, local economy and the livelihood of camel herders are improving (Photo courtesy Sahjeevan)

A woman from Mumbai tweeted in the middle of the lockdown, requesting the prime minister to arrange camel milk for her 3-1/2-year-old son with autism and severe food allergies. Through administrative channels, sufficient quantity of milk powder and camel milk were arranged.

The incident brought significant publicity for camel milk. “Many parents of children with autism and food allergies approached us,” said Hanwant Singh of Camel Charisma, a dairy of camel rearers in Rajasthan, which provided milk to the Mumbai family.

“We were able to send the milk as far as Kolkata and Odisha with the help of a special program of the Indian Railways, running during the initial phase of the lockdown when no other transport facility was available. The sale almost doubled during those days.”

Other sellers also saw a rise in orders and enquiries. “COVID-19 has put greater focus on immunity boosters and we are seeing more interest in our products,” said Shrey Kumar, co-founder at Aadvik Foods, a startup selling camel milk products since 2016.

Camel rearers know the benefits of camel milk and survive on it when out grazing their caravans for days. Several studies on camel milk have found its positive impact on autism, diabetes, liver disease, jaundice and even cancer. The milk is high in vitamin C, many minerals and immunoglobulins, which boost the immune system.

“We have several diabetics and cancer patients as our regular customers, besides around 520 families of children with autism,” said Singh.

Pritpal Singh of Baba Farid Centre for Special Children in Faridkot, Punjab, said that it is a good alternative for autistic children who can’t digest cow or buffalo milk.

The business of camel milk is crucial for the survival of Indian camels, which has fallen out of favor over the years as a draught animal. Earlier, camels were used for transportation, farming and border patrolling by the Border Security Force (BSF).

Two-wheelers, tractors and all-terrain vehicles have now edged them out. There is little use for them now, except in ferrying tourists in desert safaris. According to the 20th Livestock Census released in 2019, the camel population declined by 37.5% to 2.5 lakh from 4 lakh in 2012.

The National Bureau of Animal Genetic Resources has registered nine breeds of camel, originating in Rajasthan, Gujarat, Madhya Pradesh, and Haryana. A small population of the double-humped camel also exists in the Nubra valley of the Ladakh region. Kharai is a breed specific to coastal areas of the Kutch region in Gujarat and is famous for its ability to swim.

Rajasthan, which holds the maximum share of camel population in the country, declared it the state animal in 2014 and banned its sale or movement outside the state due to concerns that it was being slaughtered for meat. This further dented the market. Famous camel fairs at Pushkar and other places declined in scale and the selling price crashed.

“Before the law came into effect, a male camel used to sell for Rs 10,000 to Rs 50,000. Now it fetches only up to Rs 1,500,” said Hanwant Singh. Hence, camel milk remains the only hope for sustaining the present population, even though it goes against the traditional norms of the rearers.

The Raika community, the traditional camel keepers of Rajasthan, believe that Lord Shiva created them to take care of the camel, a beloved animal of his wife Parvati. The camel milk was never to be sold, and to be given for free to whosoever needed it. Same is the case with Maldharis of Gujarat, who consider camel rearing a mandate from God and its milk a gift.

“At the root of this belief is the need to prioritize the nutritional requirements of the family. Sale of milk was also not required earlier because the trade of male camels sustained the rearers,” said Ramesh Bhatti of Sahjeevan Trust, a non-profit organization working towards camel conservation in Gujarat. “It was difficult to convince them to start selling milk. Some families still keep a few camels reserved for the deity and their milk is not sold.”

Camel milk was not classified as an edible substance until December 2016, when the Food Safety and Standard Authority of India (FSSAI) came out with standards for camel milk to be sold commercially. The decision came after a sustained campaign by NGOs and camel breeders’ groups and subsequent support of Gujarat government for the same.

Today, small dairies are operating from Jaipur, Jaisalmer, and Pali in Rajasthan. Milk is supplied to local and inter-state customers in metro cities, but there is no organized market. In Gujarat’s Kutch region, the scale is bigger due to dedicated milk plants and the Gujarat Cooperative Milk Marketing Federation (GCMMF).

Kama Rabari (25) manages a herd of 50 Kutchi camels with his brother at Sanosara village in Kutch district of Gujarat. Of these, 20 are milch camels. Till some time back, Kama worked at a power plant around 70 km away from home on a monthly salary of Rs 10,000.

“Today, I make Rs 1,000-2,000 per day staying at home by selling milk,” he said. “When I heard that companies are buying camel milk, I did not feel like continuing in the job (at the power plant). There is dignity in this work.”

Camel milk sells at a premium of Rs 50 per liter in Kutch compared to Rs 38-40 for buffalo milk. The increased income has led to reverse migration in several villages of Kutch and the rearers are also increasing their stocks.

“When we held meetings initially to motivate camel owners, only old or middle-aged men used to attend. As the money started flowing, their sons took over,” said Mahendra Bhanani, co-ordinator of the camel program at Sahjeevan. “The young men who had moved to cities for small jobs have come back and bought motorcycles to transport milk to the collection points every day. The going rate of a milch camel has gone up from Rs 8,000-10,000 a few years back to Rs 30,000 now.”

In 2016, Aadvik Foods started collecting camel milk from Kutch and now has a chilling and pasteurisation plant in the region, which processes around 20,000 liters of milk every month. In 2015, the Gujarat government announced a grant of Rs 3.5 crore for Sarhad Dairy, a member of the Gujarat Cooperative Milk Marketing Federation (GCMMF), to set up a chilling plant for camel milk. The plant, collecting 2,000 liters of camel milk daily, sells processed milk and milk products under GCMMF’s brand, Amul.

“Around 150-200 families are engaged in selling of camel milk in Kutch,” said Bhatti. “Camel keepers in neighboring districts are now demanding that milk chillers be set up in their areas as well.”

Low awareness about camel milk’s benefits, lack of infrastructure – especially bulk milk coolers in remote areas, and shrinking pastures for grazing are the limitations that need to be addressed for this dairy segment to flourish.

A longer version of this was first published in Mongabay India.