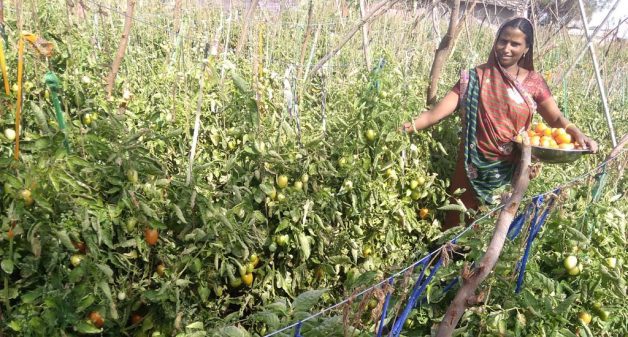 As per Census 2011, there are 312 families in Choliya village, with a total population of 2,167. The entire village belongs to the Scheduled Tribe community. At 38.16%, the literacy rate of the village is very low, compared to that of Gujarat at 78.03%.

With rain-fed agriculture and allied activities being the predominant means of livelihood, the socio-economic conditions of the people are marginal to poor, with an average annual income of about Rs 40,000. The average land holding of the people in the village is less than an acre.

In 2017, Collectives for livelihood Initiatives (CInI) and its partner organization Vikram Sarabhai Center for Development Interaction, started working in Choliya. The organizations’ objective was to improve agricultural productivity, which in turn would increase the income of tribal households.

Through systematic methods of cultivation, improved irrigation system and by learning about improved farming practices, tribal farmers have started growing high value crops. This has resulted in increased household income.

Before the intervention, most of the households were following traditional crop practices, with little or no diversity in the crop basket. These factors were hampering growth and were also the major reasons for low productivity and income.

CInI started collaborating with the community to improve agricultural practices. The organization introduced systematic methods of agriculture to the community members. This included a different package of practice for each crop.

To facilitate the community further, CInI started working on improved irrigation systems and also developed market linkages. To strengthen these programs, community mobilization with primary and secondary organizations was promoted.

The community members were encouraged to be a part of a self-help group (SHG), to foster each other’s needs and to work together as a community.

Sovni Ben Dhanabhai Khokhariya was a member of the Ramdev SHG. Her regular crop basket would include one of the traditional crops like maize, pigeon pea, black gram during kharif (monsoon crop). She would opt for sharecropping during rabi or winter crop season.

But in 2019, Khokhariya started cultivating tomatoes and high value cotton-seed crops in a part of her land, to diversify her crop basket. Before sowing the crop, she learned all about improved techniques of farming.

Her crop productivity increased by nearly 30%. She was able to harvest 3,000 Kg of tomato and 140 Kg of cotton seeds. The diversification of her crop basket reduced her dependence on one type of crop and single source of income. Khokhariya was able to earn RS 40,000 additionally from the high value crops, a jump of 100% in income.

“Sovni Ben has not only helped her own family, but also inspired other marginal farmers from the community. More people are looking forward to adopting similar practices of high value crops and diversifying their crop basket,” said Virendra Vaghani, coordinator at CInI.

Khokhariya plans to grow high value crops in a larger area of her land in the next cropping season. The intervention has helped many like Khokhariya, not only in Choliya, but in other villages too. More than 60,000 households have benefitted by switching to high value crops and also by opting for crop diversification.

“It is nice to be able to sell more and better produce. Now we are able to get money at not just one time of year from one harvest, but at different times through different crops,” said Khokhariya. “I don’t need to go to others’ fields for labor work, I can work at my own farm now and it is getting us more money.”

Farmers have been traditionally building katas across streams for irrigation purposes