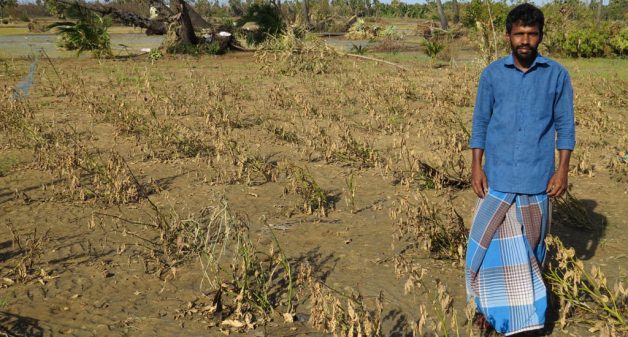 When Cyclone Gaja made landfall on 16 November, 2018, between Nagapattinam and Vedaranyam in Tamil Nadu, it left a trail of destruction, uprooting nearly 50 lakh coconut trees, more than a lakh of electricity poles, besides other fruit trees.

Storm surge is an abnormal sea level rise caused by atmospheric weather systems such as tropical cyclones and hurricanes. In November 2018, Cyclone Gaja caused a rise in sea level, bringing the brine into the coastal villages.

While seawater entered the villages of Vellapallam, Pushpavanam and Vettaikaraniruppu, Kovilpathu was the most affected. Kovilpathu village, where most of the residents are farmers, not only lost their standing crops and trees, the storm surge made the groundwater and soil saline.

As per Census 2011, Kovilpathu village in Vedaranyam taluk of Nagapattinam district had a population of 3,213. With the addition of a few colonies, the population has more than doubled. The villagers had reasonable commercial success growing coconut, paddy, groundnut, cashew and mango. But two years after Cyclone Gaja and the storm surge it caused, they are yet to recover from the impact.

Though the villagers knew about the cyclone warning, the storm surge caught them by surprise. The only other time that seawater entered the village was in December 2004, when the tsunami struck. However, two elderly villagers remembered a storm surge in the early 1950s.

“When seawater came into the village in 1953 or 54, it did not cause this much of damage,” octogenarian Chandra Thangavel told VillageSquare.in. “Tsunami also wasn’t this bad, because only seawater came. We did not lose our trees.”

Indian National Centre for Ocean Services, places the Nagapattinam – Pamban stretch of the Bay of Bengal coast,  where the village is situated, in a high risk zone, with 3 to 5 m surge height. “When seawater came in during Cyclone Gaja, water was up to my neck and I swam to the next house,” said Uma Devi. The villagers took shelter in the houses that had an upper floor.

The village is about a kilometer from the shore. The storm surge resulted in loss of crops and livestock, besides prawn and fish farms that a few villagers owned. The youth of the village, who hold professional and science degrees, yet continue farming, are aware of the climate crisis and fear increasing vulnerability and its impact on their livelihood.

Damage to water and soil

Given the salinity of the seawater and the coastal sludge deposited by the  storm surge, the crops wore a scorched look. Chandra Thangavel lost her entire groundnut crop. Radhakrishnan Sivagnanam lost his paddy crop. Every farmer recounted a total loss.

As the village lies about 2.5 km from the Nagapattinam – Vedaranyam Road, the villagers’ plight was immediately not known. For a few days, they had to survive on groundwater contaminated by seawater. During rehabilitation work, the panchayat was quick to address the issue, by arranging for piped drinking water supply.

However, the farm lands still bear the effect of the storm surge. Crop yields have been less than usual. “Water is the main problem. If we had received good rains, the salinity would have reduced, but the rains were less,” said Veeraramakrishnan. R (30).

Veeraramakrishnan normally gets a profit of Rs 4 lakh from cultivating groundnut. “From one sack of groundnut seed sowed, we generally harvest 10 sacks. But last year we harvested only four sacks,”  he told VillageSquare.in.

Visu Ramaiyan (30) concurred that groundnut yield was very less last year. According to an agriculture department official who did not wish to be named, the farmers did not buy seed groundnut, but from wholesale traders, and that is the reason for the poor yield.

Notwithstanding the allegations and the limited rainfall, farmers remain hopeful. “In three weeks, we will start planting groundnut for this season,” said Visu Ramaiyan. The farmers believe that the few days of rain received this monsoon would have decreased the salinity a bit.

Of the 120-odd coconut trees that Visu Ramaiyan had, only 25 survived the cyclone. “Even the remaining ones produced spathes after many months. The yield was so low that we couldn’t sell the nuts but use only for our own consumption,” he said. Veeraramakrishnan lost all the trees in his 2-acre coconut farm, except a handful. All the villagers related a similar loss.

Though Eega Trust carried out relief work for a considerable stretch along the coast, their agricultural development work was confined to Kovilpathu village. “We distributed coconut saplings as part of agri development work,” said Mohanarajasekaran. R, of the trust.

With such contributions, and with the compensation of Rs 1,100 per coconut tree given by the Tamil Nadu government, all the farmers replanted coconut saplings. They were in for a shock again, as rhinoceros beetle damaged the saplings.

According to Chandrasekar. K, agricultural entomologist, Tamil Nadu Dr J Jayalalithaa Fisheries University, Sikkal, the beetle proliferated since the fallen trees, which provide an ideal condition for breeding, were not removed immediately.

The scientist has been advocating a slew of measures to overcome the problem. “The beetles attack at all stages of the trees’ growth. Since there were no big trees, they attacked the saplings,” Chandrasekar told VillageSquare.in. “The beetles can be eradicated only if all the farmers follow the suggested measures, and not a handful in isolation.”

Farmers who have planted in a few acres admitted that it was not easy to look for the beetle in every sapling and destroy it. Some have found an alternative. “They are growing the saplings in big plastic bags for one year and then transferring to the pit, which is quite effective in controlling the beetle,” said Veeraramakrishnan. “So we are all planning to adopt the same method.”

Veeraramakrishnan and Visu Ramaiyan used to earn a minimum of Rs 15,000 per month from the coconut trees. All the farmers earned a considerable income from mango, casuarina and cashew trees. Cyclone Gaja has robbed them of this income.

“As it would take a few years for trees to grow and bear fruit, we suggested vegetable cultivation  to the farmers and distributed saplings and seeds,” Mohanarajasekaran of Eega Trust, told VillageSquare.in.

Veeraramakrishnan planted brinjal in half-an-acre. “The yield was good. Brinjal and cluster beans are doing reasonably well,” he said. “It is at least helping us manage our regular household expenses.”

Prior to Cyclone Gaja, only a few farmers such as Ayyappan Rengaiyan (38) grew vegetables. He had been harvesting brinjals for a week, when the cyclone struck. The brinjal and jasmine plants were scorched beyond salvaging.

Though he had coconut trees, vegetables brought a daily income. Of the 120 coconut saplings he planted, only 40 survived the beetle attack. But he is quite satisfied with the yield and income from brinjal and jasmine. And so are the farmers, who cultivate vegetables for now, and hope their situation would improve in a few years.