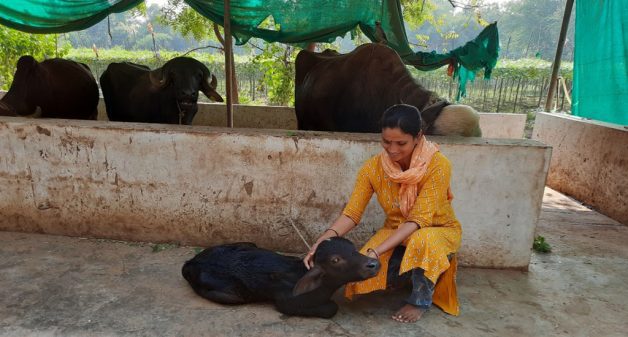 Following the COVID-19 lockdown, several businesses in rural areas were considerably affected. Dairying is one of the prominent sectors to have been significantly affected, in addition to several other rural occupations.

The lean season of India’s milk supply witnessed a paradoxical situation in which the dairy cooperatives were saturated with excess milk. The decline in bulk liquid milk demand from private dairies, milk vendors, and the HoReCa (hotels, restaurants, cafes) industry caused distress amongst the farmers when some dairy cooperatives declined to collect milk.

This led to challenges for farmers as well as dairy cooperatives. On the one hand, farmers had to discard milk – as reported largely from Maharashtra and Kerala; on the other, dairy cooperatives created additional milk capacity and reduced the turnaround time for procurement, processing and distribution, creating a welcome interdependence among farmers in the process.

When the coronavirus was causing distress amongst farmers in the entire country, a small village cooperative located in Mujkuva village in Ankhlav taluk of Gujarat’s Anand district, has helped dairy farmers.

The cooperative not only collected milk twice every day, but also ensured fair procurement prices for the milk sold in the entire tenure of COVID-19 lockdown. The input services provided by the milk society to farmer members were also supplied without much interruptions.

“We provided members with masks and sanitizers. They followed social distancing by standing in marked circles when they brought milk to the cooperative. The queue was very long in the morning as well as in the evening,” said Labubhai K Patel, secretary of Mujkuva Dairy Cooperative Society (MDCS), whose 1,645 farmer members supply over 5,000 liters of milk to Amul Dairy every day.

Patel said that all the employees of MDCS, worked from dawn to dusk to collect milk. They also sensitized the farmer members about COVID-19 and the importance of maintaining the hygiene of cattle. Being the administrator of the cooperative society, Patel has created an invisible bond of affinity between the cooperative and the members during these tough times.

Hemaben and Narasbhai, a couple residing in Mujkuva village, owns five cows and four buffaloes. They have been in the dairy business for the past 14 years. They are members of the Mujkuva District Cooperative Society and sell around 40 liters of milk every day.

From owning two cows and supplying 7 liters a day, the couple has come a long way in this business, which has now become their livelihood and a major source of income. The couple and other family members start milking the cows at 4 am and complete the first round of delivering milk at the MDCS by 10 am.

The second round of delivering milk starts at 5 pm and ends at 8 pm. The cooperative society ascertains the quality of milk using fat and solid-not-fat (SNF) percentage, based on which the price of milk is determined.

The cooperative also provides input services like feed for the cattle, veterinary and artificial insemination at subsidized rates. The DCS provides veterinary services at Rs 100, compared to private services where a veterinary doctor’s visit costs between Rs 500 and Rs 600.

Several interventions made by organizations such as Amul and National Dairy Development Board (NDDB) have helped augment the income of farmers as well as milk production of cattle. “Our dairy’s milk production increased by about 15 liters after the developments brought out by these organizations,” said Narasbhai.

The lockdown created interdependency amongst dairy farmers as they developed a small community and bartered supplies with one another. For instance, few dairy farming households gave grains such as wheat and rice in exchange for vegetables and millets grown by other dairy farmers. Thus the farmers were self-reliant and were also able to contain COVID-19 by not stepping outside the village.

Hemaben and Narasbhai, who own 4 acres of land, grow rice, bajra and a few vegetables along with green fodder, which is a major nutrient for the cattle. To ensure the availability of this nutrient for their cattle throughout the year, the family has apportioned  an acre of land for growing green fodder.

Narasbhai purchases dry fodder from middlemen – known as dalals locally – at Rs 100 to Rs 200 per 20 kg. The cattle dung is collected and used for bio-gas production. The slurry generated as by-product is sold as manure, which fetches them an additional income of Rs 900 to Rs 1,200.

The same manure is used by them in their agriculture field. What starts in the field ends in field in a circle. The dairy ecosystem has thus formed a circular practice amongst the farmers by integrating agriculture, dairying and bio-gas production.

“We used to spend a lot on LPG and fuel wood, but the bio-gas plants have made our lives easy and we are also getting an additional income,” said Hemaben, who is currently the chairman of the Mahila Gobar Cooperative.

The cooperative is being run by 25 female dairy farmer members since 2017, when NDDB installed bio-gas plants in over 40 households of the village as part of a pilot project.

NDDB has also installed a solar plant which enables the farmers to sell surplus energy produced in their fields. This led to the formation of Mujkuva Saur Urja Utpadak Sahakari Mandali, a solar cooperative that uses solar power to run irrigation pumps for their fields.

“Every time I sell the surplus energy to the grid after irrigating my crops, I earn around Rs 400/day as an additional income,” said Sanjaybhai Patel, one of the members of the solar cooperative.

The Mujkuva model can be expanded to other regions by leveraging the existing network of dairy and energy-based cooperatives.

Installation of bio-gas plants in states where dairying is in practice and building resilience of dairy farmers could be a way forward in mitigating sudden economic shocks that farmers face such as what they experienced during this pandemic.

Shweta Krishnan and Ankit Sontakke are junior research fellows working with the Verghese Kurien Centre of Excellence at the Institute of Rural Management Anand (IRMA). Views are personal.