Sacred groves, an integral part of tribal life have been declining. Villagers are restoring the groves to ensure preservation of their culture and to address malnutrition 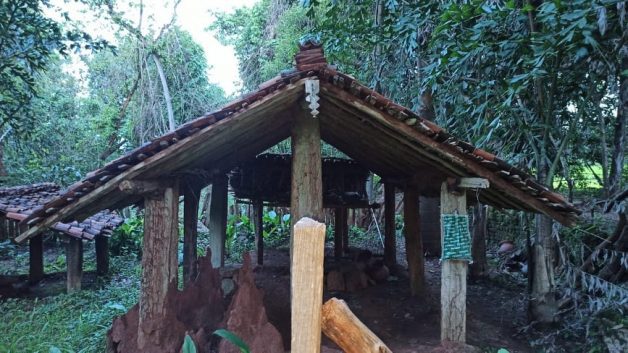 Sacred groves are patches of protected forests known by various local names. They have survived due to active forest management by local communities over centuries. Restrictions like no felling of trees or lopping off branches have helped preserve many such groves though their numbers are dwindling throughout the country.

The sacred groves of Chhattisgarh known as devgudi date back a long time when the villages first came up and communities settled down. “The devgudi or groves were established by our ancestors. We visit them only thrice a year, but offer worship at the village matagudi, a religious shrine for the goddess, on Tuesdays,” said Kobasi.

He said that most villages have devgudi as well as matagudi and these places are dotted with trees. The mahua (Madhuca longifolia) tree is considered sacred in Chhattisgarh while the sal (Shorea robusta) is a sacred species in Jharkhand. Many such important tree species are found in sacred groves.

As the sacred groves are intricately linked to Chhattisgarh’s tribal identity, a conservation project aimed at protecting these groves has been launched in Dantewada, one of the seven districts in the Bastar division, and is going on since August this year. Local communities have been engaged for carrying out the restoration work. These sacred places would serve as cultural as well as nutritional spaces.

Jeet Singh Arya of Unexplored Bastar, a social media handle which seeks to promote the beauty of Bastar, said that the Dantewada district administration has been running this initiative for the past three months, aimed at preserving the local culture.

“Tribal people have a deep belief in and reverence for nature, worshipping even rocks  in many places. A village can have many gods and goddesses –  a particular god can be invoked for protection, another for good rains and bountiful harvest,” said Arya.

“Some of these groves are 500 to 1,000 years old,” Deepak Soni, collector of Dantewada district, told VillageSquare.in. “To conserve tribal culture we have chosen one grove in each panchayat for developing it as a tourist site.”

“We have placed a stone at the site and sometimes pray for good rainfall,” said Sundarlal Bhogani, the sarpanch of Mangnar village. “The village is inhabited by the Mariah tribe. Women do not enter devgudi which are in densely forested areas.”

In Toylanka village which has four sacred groves and two matagudi shrines, men stay at these sacred sites in April, and prepare rice. Sometimes cocks are sacrificed. The shrines cater to the OBC community, and the groves to tribal communities like Mariahs, Muriahs and Gonds.

“If we do not worship at the devgudi thrice a year, we will incur heavy losses like shortage of paddy or harm to cattle or even diseases,” said Bhima Ram Kartam of Toylanka. “We follow all customs and rituals set down by our ancestors.”

Jay Narayan Bastaria, a resident of Balud village, said that some families or communities have their own devgudis. In Paraspal village, a one-day festival called Diwar is observed at the sacred grove after Diwal,. As part of it, villagers worship new paddy brought from the field and then take it home.

Such traditions and practices surrounding these groves are being documented in addition to conservation. Arya’s team talks to the priest of a village, about family trees and important rituals and documents them. “We have documented 120 of them so far,” said Yogesh Kumar Nag, who works with Arya.

“As Adivasis repose faith in sacred groves, it is a good idea to link their conservation with the idea of defeating malnutrition,” Arya told VillageSquare.in. Across all locations, people will be encouraged not to cut trees.

The initiative has been linked to the chief minister’s campaign against malnutrition, said Soni. The collector said that the villagers should protect the trees and that the district administration wanted the local residents to take a pledge to end malnutrition.

“Fruit trees are being planted at these sites to develop nutrition gardens even though the groves already have important tree species,” said Kobasi.

“Through the project, we expect social change that includes educating children, ensuring nutrition in malnourished communities, keeping villages clean and preventing anemia among women,” said Soni. “Based on their performances, we will create yellow, green and white panchayats, green being the best.”

A lot of the restoration work is going on under MGNREGA. The estimated budget for the entire project is Rs 10 crore. It is expected to be completed by 26 January, 2021 and about 20% of the panchayats have already completed the work.

“Bastar tribes associate with sacred groves from birth to death,” Tulika Karma, the zila panchayat president in Dantewada, told VillageSquare.in. “We want visitors to see how well we maintain our religious spaces. In some panchayats, even matagudi shrines will be restored.”

One village in each of the 143 panchayats in the district has been selected for this project. Of the four groves and two shrines in Toylanka, one shrine is being restored at present. “As part of the protection measure, the groves are being fenced,” said Arya.

“The single grove in our village is being restored,” said Bhogani of Mangnar. In his village, fencing work is going in and seating arrangement on a raised platform is also being made for visitors. Along with fencing, the groves are being GPS tagged to promote eco-tourism.

“The traditional structures are not being disturbed. We are just trying to restore and build the existing area as a cultural center and tourist spot. These areas can also inspire communities to take pledge for leading a better life,” said Soni.

Anil Karma of Paraspal said that this was a good project for conserving their faith. “We will be able to protect these spaces better after barbed wire fences come up. We are also building sheds and constructing toilets near these sites,” he said. “Many villagers are offering their labor for the restoration work.”

“Tribes consider trees as part of their culture and have preserved them over the years,” Sundeep Balaga, divisional forest officer, told VillageSquare.in. “That is why the forest department is helping them develop their groves as green spaces and encouraging them to plant various important local tree species.”