In solidarity with protesting farmers in Delhi, men and women farmers of Maharashtra staged road blockades, demanding withdrawal of farm laws, and placed a charter of demands 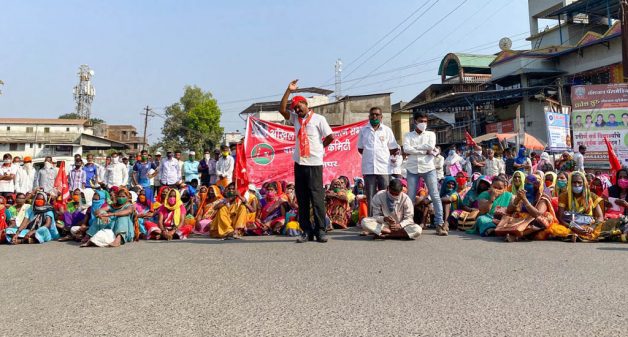 “We will not back down today,” said Tukaram Valavi. “We are being attacked by this government. If we ask to be given 10 acres of land where we have been cultivating for years, they give us only 10 gunta (a quarter of an acre). If we ask for five acres, they will give us three gunta. How will we eat without our land? We have no money, no work and no food.”

Valavi (61) is from the Warli Adivasi community and cultivates three acres in a hamlet of Gargaon village in Wada taluk of Palghar district. He was at a protest, along with an estimated 3,000 farmers and agricultural laborers from various villages of Palghar, many from the Warli community.

On 26 November, farmers from Adivasi communities gathered for a road blockade in Maharashtra’s Palghar district, in solidarity with the ongoing protests in Haryana-Delhi, and with their own 21-demand charter.

On 26 November, the farmers staged a road blockade at Khandeshwari Naka in Wada taluk against the three new farm laws passed on 27 September “aimed at the transformation of agriculture in the country and raising farmers’ income.”

These, the government claims, will open up the agricultural sector to private investors and global markets. The passing of these laws has, since September, led to widespread protests by farmers – especially in Haryana, Punjab and western Uttar Pradesh.

With all the attention on the pitched battles farmers have been fighting on the Haryana and Delhi borders in recent days, the protests by their counterparts in many states – in solidarity with their demands, as well as adding some local ones – have received little media attention.

In Maharashtra, for instance, at least 60,000 people participated in a series of protests on 25 and 26 November across the state – from Nashik to Palghar and Raigad. Even within these districts, the protests have been dispersed across many centers in different taluks.

In Wada this week, Valavi’s pressing concern – land titles – was among the demands at the rally, which was organized by the All India Kisan Sabha (AIKS). It’s a demand that has recurred at several protests by Adivasi farmers in Maharashtra for some years now.

Valavi has been doing the rounds of courts for 15 years to get the title for his plot. “In (our) villages, those who cultivate forest land have faced injustice by the forest department,” he said. “We have to fight these cases in court. We don’t have money to pay for our bail. Where will we poor people bring that kind of money from?”

At the rally on 26 November, they had a charter of 21 demands, which the farmers presented at the tehsildar’s office in Wada taluk. Almost everyone who came wore masks or covered their faces with scarfs/handkerchiefs. A few AIKS volunteers distributed masks and soaps to the protesters.

The 21 demands include a withdrawal of the three recently passed farm laws. The other demands cover a wide range, including stricter implementation of the Forest Rights Act (FRA) of 2006, adequate compensation for crop losses due to unseasonal rains, improving the public healthcare system (in the context of COVID-19).

The charter includes a demand to end online classes. “We want the government to stop online studies. Our children are not learning anything online. We don’t have big phones and there is no signal in our area,” said Renuka Kaluram. She has three small children who attend the local anganwadi.

The charter also includes a call for income support of Rs 7,500 for each family, and 10 kilos of rations for each family member for six months during these pandemic times – a demand many farmers at the rally spoke of.

Dev Wagh, from Kanchad village, demanded that electricity charges be waived off. “We have not even worked on our fields and we are getting such a high bill. For six months we shouldn’t be asked to pay the electricity bills,” he said.

The charter of 21 demands includes a call to scrap the new Electricity (Amendment) Bill, 2020, that will bring steeply higher tariffs for farmers and others in rural India. Many were also protesting against highly increased (or inflated) bills since April this year.

Janki Kangra and her 11-member family cultivate rice, jowar, bajra and millets on three acres, while battling, she said, the forest department’s strictures.

“Some women from our area have to walk for four hours every day to earn an income,” said 54-year-old Rama Tarvi from Kanchad village, an AIKS activist.

Tarvi’s family cultivates rice, jowar, bajra, and wheat on two acres. “They get Rs 200 after working all day. We have land but the forest department does not let us cultivate it. There is already no work during COVID.”

“The FRA plots are our only means of livelihood and yet even during COVID they are making us risk our lives and come out to demand (rights to) our plots that we have cultivated for years,” said 50-year-old Suganda Jadhav.

Jadhav’s family cultivates rice, bajra, urad and millets on two acres. “We have protested and demonstrated so many times, but the government does not listen. The government has forced us to come out on the streets again.”

This story was first published in PARI.