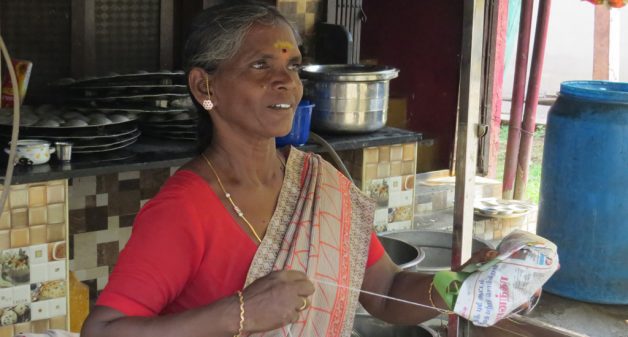 As shops and businesses opened for the day in Erode, a few kilometers away, women running eateries were about to wind up their breakfast fare. While some women were still packing idlis for take-away orders, a few served idlis in banana leaves, to men who sauntered in.

The women aver that the place would be a beehive of activities from dawn till about 9.30, as they would keep making batches of idlis. Be it a political campaign, a wedding or temple festivals, idlis are always in demand, keeping the eateries – most of them being run by women – busy almost through the year.

Canteens of hospitals and educational institutions place bulk orders for this humble breakfast fare. With the enterprising women of Karungalpalayam in Erode district of Tamil Nadu supplying idlis in bulk to nearby places, the locality has come to be known as the idli hub.

While swiftly tying a thread over a paper that holds idlis ensconced in a banana leaf, to give the parcel to a waiting customer, Eswari Thangavel of Praveen Idlies, reminisced their journey. Her father Seerangan used to weave kaadaa, a cloth material.

When synthetic cloth came into the market, the demand for cotton cloth declined. Seerangan could not sustain his family with the income from weaving and he started driving a bullock cart to ferry materials to markets.

Gandhimathi Madheswaran’s father became a hawker, buying tapioca from farmers and selling the same from his bullock cart. It was not very remunerative.

To augment the household income, Seerangan’s wife Chellammal decided to pitch in by making idlis. Forty years ago, idli was not a common breakfast in rural areas. She reasoned that people would buy idlis as the easily digestible food could be consumed by everyone, and everyone could afford them.

“Doctors generally suggest idlis for patients and convalescents. So my mother Chellammal approached a few private hospitals,” Eswari Thangavel, told VillageSquare.in. “The doctors tried out our idlis and agreed that we could supply.”

Eswari Thangavel’s siblings and her maternal aunt pitched in as the demand increased and they started supplying to more hospitals. Around this time, Dhanapackiam, Gandhimathi Madheswaran’s mother also started selling idlis, as her husband’s income as a tapioca hawker was not sufficient.

As the idlis were made at home, they were soft and fluffy. “Only because of that the idlis became popular as Khushbu idlis,” said Eswari Thangavel, after a popular Tamil actress of that period. With the sale of idlis picking up, women in their immediate and extended families too started idli business.

Women at the helm

Right from the time Chellammal Seerangan started selling idlis, women are in charge of most of the eateries. In addition to getting the necessary groceries and deliveries, men assist the women in their road-front shops.

Nearly 25 years ago, Raju worked as a mason. His wife Mallika started making about 50 idlis every day at home. Women with school-going children became her customers. “I would get the fire going in the wood-burning stove, and do some of the preparatory works before leaving for work,” recalled Raju.

Today her Mallika Idli Shop has grown, and she has rented a shop. Despite making idlis the traditional way by steaming the batter in cloth-lined stands, when there is a huge demand during auspicious seasons, the women have become adept at working at a fast pace.

Mallika Raju asserted that they have always used banana leaf to pack idlis. “After the state government single-use plastics, we have put up posters, encouraging customers to bring their vessels to collect chutney and sambar,” she said.

When Thangavel moved to her husband’s village after marriage, she helped him with his weaving, as he continued the family’s traditional livelihood. With lack of financial sustenance, and her attempts at working in other units not panning out, she decided to join her parents’ eatery business.

“I tried working in Tiruppur, then tried running a hosiery shop, but there was not much income. I decided to join the idli shop my parents-in-law had started,” Madheswaran, who along with his wife Gandhimathi, runs Anusuya Idli Shop, told VillageSquare.in. Now his sons have joined him.

When Mallika started getting bigger orders, Raju quit his work. “Now my son Mohan and daughter-in-law Sangeetha also work with us,” said Raju.

Eswari Thangavel’s son and daughter-in-law are also involved in the business now. Her son Praveen has put up a simple web page, detailing the variety of idlis they offer.

With Karungalpalayam developing as an idli hub, wedding caterers and canteens outsourced their idli requirement. “Local restaurants buy idlis from us at Rs 3 per piece, or at Rs 6 if they want chutney and sambar, and they sell for Rs 8 to 10,” Mallika Raju told VillageSquare.in.

The shops get large orders during festivals and political rallies and meetings. “When you place an order with these shops, you know that you will get idlis of very good quality, at reasonable rates and on time,” said Palanisamy S. K, who places orders regularly.

With such testimonials, often there is an demand for the eatery owners to make idlis at the customers’ place. Mallika Raju remembered camping at a popular politician’s house in Chennai for 10 days, during a family function.

Madheswaran’s family travels to a private religious center during navaratri and temple festivals every year. “We stay there for a week or two, depending on the occasion. We carry all the material,” he said. “If we get order from nearby towns, we prepare the batter at home and take it in a rented a mini tempo.”

“Just now a businessman from Kolkata came to our shop to eat idlis,” said Mallika Raju. “Can you imagine. He came to eat idlis that cost so less, by paying Rs 150 as auto fare. That is the popularity of our idlis.”

The women recounted stories of north Indian businessmen who come for procuring turmeric from Erode, buying their idlis to take home, or for their journeys. “Some north Indians like to have idli and dosai when they visit. So I refer them to Karungalpalayam,” Kathiravan. M, a turmeric farmer, told VillageSquare.in.

Valli, a widow, has been able to sustain herself and her daughters by making idlis. Most of the shops stick to making idlis, and dosais at times. Some like Raju, have added other fares to their menu. Everyone agrees that idlis are their main stay and that it would remain that way.

The caterers and regular customers come to Karungalapalayam to collect their orders. “Though the demand has come down during the lockdown since there are no meetings and weddings, we continue to do business,” said Raju. “Many organizations buy a few hundred idlis every day to feed the poor.”

The eateries do face difficulties such as increase in price of firewood, raw materials, their availability and the like, yet they weather the storm. The women continue to offer their fare, knowing that making idlis not only provides them with a livelihood, but offers sustenance to countless people.