For more than a century, Kerala’s forest-dwelling tribes have been repeatedly evicted for power projects. Faced with another displacement, the tribes refuse to give up their rights 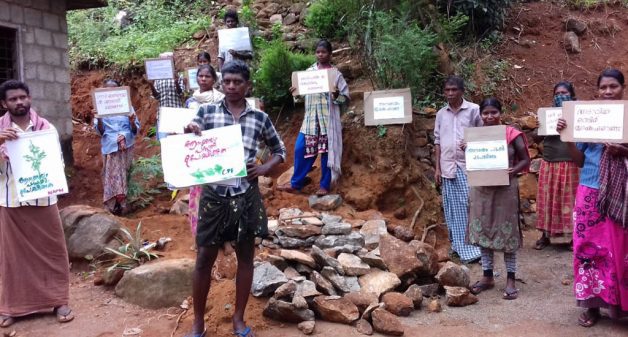 After repeated evictions, forest-dwelling Kadar tribes in Peringalkuthu protest against a project that would displace them again (Photo courtesy Chalakudy River Protection Forum)

Now in her early thirties, Geetha V K inherits a family legacy of getting displaced many times in the name of development. First woman chieftain of a tribal segment in Kerala, she belongs to the forest-dwelling Kadar community which had an undisturbed existence till the beginning of the 20th century in the deep interiors of the present day Parambikulam Tiger Reserve.

It was in 1905 that her forefathers were forced to vacate the area when the British Presidency of Madras constructed a tramway linking the forest to Chalakudy railway station. The aim was to transport teak and other timber to Kochi harbor, to be shipped to Great Britain, where even the British royal family is believed to have had a preference for furniture made of Parambikulam timber.

Geetha’s forefathers moved to forested Peringalkuthu, making way for the tram lines. In the post-Independence period, they were forced to move to Sholayar region of the same forest when their settlement was demolished for the construction of a dam. In the 1970s, they were displaced for a hydel power project in Sholayar. Facing another eviction now, the tribes are demanding that their rights be respected.

In Malayalam, Kadar means forest dwellers. They live in small communities. They used to follow a nomadic lifestyle and practice shifting cultivation, growing rice and millets. There are only 1,848 Kadars in Kerala now and 90% of them live in the nine settlements of Anakkayam region.

Now Geetha lives in Vazhachal, which is a few kilometers from Sholayar, their previous settlement. Faced again with another eviction and loss of livelihood in the name of a new hydel power project, she is categorical that the community would not move again.

“There is no other community in Kerala that has faced displacement and uncertainty so many times in the name of development,” said Geetha. “These are our forests and we will not move out. We will live here and protect it using provisions under the Forest Rights Act.’’

Learning about the proposal of Kerala State Electricity Board (KSEB) to cut several trees from Anakkayam forest located close to Athirappally and Vazhachal, popular tourism destinations, for hydroelectric project, Geetha contacted forest department officials. Initially they feigned ignorance of such a project.

The officials said that no such project could be implemented in the locality without the consent of Kadars in the nine settlements. Under the Forest Rights Act (FRA), the settlements have already won community forest rights (CFR) on the forest region from Malakkappara at the Tamil Nadu border to Athirappally near Chalakudy town.

Later KSEB officials informed Geetha that there was indeed a plan to implement the project and the works would begin soon. They said they were implementing the project based on a consent given by Kerala Forest Department eight years ago.

According to Ajitha V, secretary of the CFR coordination committee of all the nine Kadar settlements, the move by KSEB has shocked all the tribes in the region, who will have to vacate their dwellings once work on the project begins.

Ajitha has filed a case with Kerala High Court against KSEB for taking a decision that violates CFR and FRA. Despite repeated attempts for an explanation regarding the rights of Kadars being violated, no response could be elicited from the officials and minister concerned.

“KSEB is initiating the construction of a small hydroelectric project with an installed capacity of 7.5 MW at Anakkayam falls in the Chalakudy river basin,” Ravi S P of Chalakudy River Protection Forum told VillageSquare.in.

KSEB plans a 5 km long tunnel at Anakkayam, to be built by blasting the rocky terrain. It would channel the tail race discharge from the existing Sholayar power house. The project with an underground powerhouse will also use the spillover from the Sholayar dam, besides the seasonal rainfall.

Ecologically, the project falls in the buffer zone of Parambikulam Tiger Reserve and most of the trees to be axed are evergreen. Also, Anakkayam and Vazhachal are part of a major habitat of Asiatic elephants. The Athirappilly-Vazhachal-Anakkayam region is also a haven for 196 birds, 131 butterflies, and 51 odonate species.

As half a dozen hydel projects are already located in Chalakudy River, which flows through Anakkayam, Vazhachal and Athirappally, the wildlife movement has already been affected on a large scale. The new project would further disturb them.

Anakkayam witnessed a major landslide during the massive Kerala floods of 2018. Tribal people who lived close to the proposed project site had to move away. Their huts were destroyed in the landslide.

According to the tribes and environmentalists, blasting for tunnels would increase the risk of landslides. Banks of Chalakudy River were the worst affected during the 2018 floods and one of the cited reasons was the presence of the power projects.

“Kadars maintain a harmonious existence in the forest. They are safeguarding four major varieties of hornbills in the Athirapally-Vazhachal region under a forest department project,” Harish Vasudevan, environmentalist and a lawyer with Kerala High Court, told VillageSquare.in. “After the 1970s, the community has stopped hunting, poaching and timber smuggling.”

Anakkayam is an area on which they depend heavily, for collecting minor forest produces (MFPs). The livelihood of Kadars in all the nine settlements is based on collection of MFPs such as honey, spices, tubers, and mushrooms, among others.

Sources in KSEB said that the project was originally conceived 30 years ago but was not implemented because of strong objections from the forest department. The project which was in cold storage for a long time, was revived in June this year, based on permission obtained from the forest department in 2013. But KSEB had to shelve it again in the face of stiff public opposition.

“We were never consulted for the project and no one has heard about it,” Geetha told VillageSquare.in. In its interim order, the High Court has instructed KSEB not to cut any tree from the area till taking a final decision on the case filed by Kadars.

Other than the Anakkayam project, the community is also facing threats from the proposed 163 megawatt Athirapally hydel power project, where a large dam would block the flow of water into the Athirappilly waterfalls.

“The tunnel they are proposing is 5 km long and its construction alone can destabilize our precious forests,” Raman B, head of a Kadar colony told VillageSquare.in. “We will not allow the KSEB to displace us and cause irreparable damage to the forest, environment, and our livelihood.”

K A Shaji is a journalist based at Thiruvanathapuram. Views are personal.