With hard-earned and loan-funded professional and arts degrees, rural youth who lost their jobs during lockdown have taken up MGNREGS work in Bidar 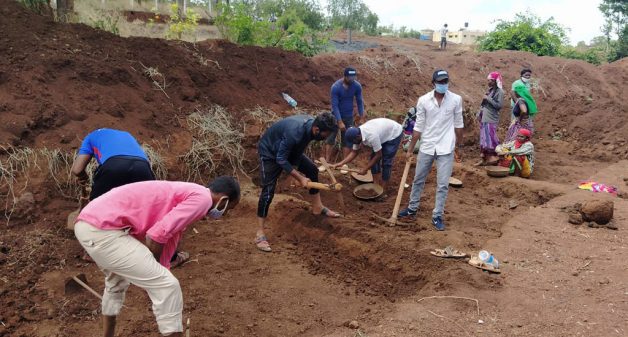 When Earappa Bawge found work as a project manager in Bengaluru in March 2019, he had no way of knowing that a year later he would lose that job to the lockdown. And that by June 2020, he would be working at Mahatma Gandhi National Rural Employment Guarantee Scheme (MGNREGS) sites in Kamthana, his village in Bidar district in north-eastern Karnataka.

“After sitting jobless at home for a month, I tried to understand the MGNREGS process in April,” he said. “We barely had any money when the lockdown was announced. Even my mother was finding it difficult to get work because farm owners weren’t calling laborers.”

Many educated youth like Earappa Bawge, who returned to their villages at the start of the lockdown, have lost their jobs. In desperation they have taken up labor work under government’s MGNREGS.

The job that Bawge lost to the lockdown had come his way after a lot of hard work and growing debt, and with his family members’ support and determination to lift themselves out of a subsistence-level income through education.

Bawge had completed his B Tech degree in August 2017 from a private college and a diploma in automobile engineering from a government polytechnic before that. For eight months after his polytechnic course, he worked as a trainee in a multinational company in Pune that makes farm machinery, earning Rs 12,000 a month.

Then he enrolled for the degree course. “I was a good student so I thought I could take on bigger responsibilities and earn more money. I thought one day I too would be called an engineer,” said 27-year-old Bawge.

His family took several loans to finance his education. In 2015, when he was still in college, his 48-year-old father, a laborer, passed away due to jaundice. For his treatment, the family took further loans. “By the time I completed my degree, I had many responsibilities,” said Bawge.

So when he got a  job in Bengaluru in a small-scale unit making plastic molding machines as a project manager for a salary of Rs 20,000, his family was happy. That was in March 2019. “I sent my mother Rs 8,000-Rs 10,000 every month. However, everything changed once the lockdown was imposed,” he said.

He had to return home when his mother felt that he would be safer in the village. His family of four survived on what his mother earned as a farm laborer. “Farm-owners usually employ women experienced in doing the work, and not young men,” he said. The family – they belong to the Gond community, a Scheduled Tribe – earned Rs 5,000 a month by selling the milk of the buffalo they owned.

Bawge worked on MGNREGS sites for 33 days – mostly canal desilting tasks – and earned a little over Rs 9,000 in total. His brothers and mother too took up MGNREGS work. Since September, his mother has been getting more weeding work on fields, for her usual daily wage of Rs 100-150.

Within a few days after his return to Bidar, the manufacturing unit Bawge worked at in Bengaluru shut down for three months. “My boss said there’s not enough work for everyone,” he said, distraught. He is looking for a job again.

In the same village, Atish Metre (25), who completed his MBA coursework in September 2019 from the Oxford College of Engineering, Bengaluru, has also, in recent months, worked with Bawge on MGNREGS sites in Kamthana village.

In April this year, he had to leave his job in the sales division of a private Bank in Bengaluru due to the lockdown. “We had targets to meet and stepping out of the house was neither allowed nor safe. A majority in my team quit. I had no other option,” said Metre.

He returned to Kamthana with his new bride, 22-year-old Satyavati Ladgeri, who has a B Com degree. Both worked at MGNREGS sites till Ladgeri could not handle the exertion. Metre continued, and with 100 days of work on these sites – digging trenches, cleaning small dams, desilting lakes – he earned a total of around Rs 27,000.

Metre’s family belongs to the Holeya community, a Scheduled Caste.  His parents are laborers, as is another brother in the eight-member family. Metre and his brother who works as an AC technician in Bengaluru are trying to pay back the loans that the family had taken for two of his brothers’ wedding.

Unlike Metre and Bawge, Pritam Kempe had stayed back in Kamthana after he graduated in 2017. He found part-time work as a quality tester at a drinking water plant for Rs 6,000 a month. “I had to start working immediately after graduating, to support my family; going out to the city wasn’t an option for me,” he said, since his widowed mother needs him.

His mother – the family too belongs to the Holeya SC community – earns an income by stitching clothes, but has vision problems and leg pain due to the work; his sister is studying for a B Ed degree too, two older siblings are married and live separately; their father, a farmer, passed away in 2006. He had borrowed Rs 1 lakh in February from a private financing firm for his elder sister’s marriage.

In the first week of May, he too started working at MGNREGS sites along with Bawge and Metre. “It is very difficult for me to manage finances like this. When it rains, we don’t even have work,” he said. Kempe worked for 96 days and earned a total of around Rs. 26,000. He has to redeem his mother’s pledged jewels and repay loans.

Like Bawge, Metre and Kempe, many others in Kamthana village — which has a population of 11,179 — turned, in desperation, to MGNREGS work during the lockdown.

Desperate for a livelihood

“Initially, when the lockdown was imposed, many people were out of work and struggled for food,” said Lakshmi Bawge, who helped form the Buddha Basava Ambedkar Youth Team in March 2020. The group now has around 600 members of all ages.

The team collaborated with the district administration in Bidar town in the early lockdown weeks to distribute rations to families in Kamthana who either did not have a card or were not able to access PDS outlets,  delivered food supplements from anganwadis to pregnant women, and tried to help in other ways.

Lakshmi (28), a member of All India Democratic Women’s Association, spoke to activists in neighboring Gulbarga district to understand the process of registering for MGNREGS work. “It was not easy for these unemployed youth to get the job cards,” she said, because of irregularities in the process at the panchayat level. “However, senior officials in the district made sure that they could start working.”

From April to September, a total of 494 MGNREGS job cards were issued in Kamthana, said Sarath Kumar Abhiman, assistant director in the Bidar taluk panchayat. “There was a huge influx of migrant workers returning to Bidar. So we started issuing job cards and allocated work under MGNREGS,” said Abhiman.

The young men in Kamthana village are desperate to find work where they can use their education. “I want something where I am given responsibilities,” said Bawge. “I want my education to be of use. I am an engineer and want to work in a place where my degree is given at least some value.”

Tamanna Naseer is a freelance journalist based in Bengaluru. Views are personal.

A longer version of this story was first published in PARI