A socio-legal forum led by rural women resolves gender-based conflicts and injustice within families and communities, and helps women in villages lead a dignified life 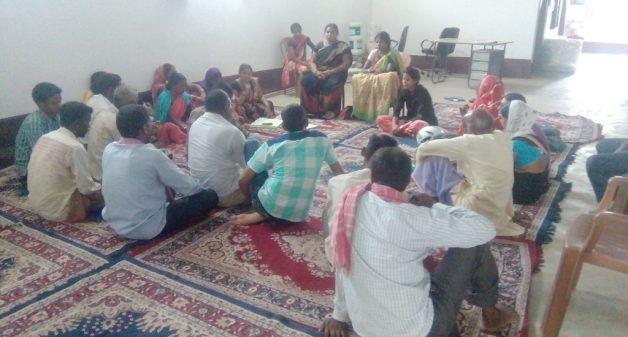 “It is so normal for women, especially in rural areas, to get beaten up by her husband and say nothing because she has nowhere to go. A woman’s life starts and ends inside a home,” said Anita Devi, a gender activist from Baksara, a small village in Poraiyahat administrative block.

It was impossible for her to go for self-help group (SHG) meetings, or any training organized at the block level. “Women seen in a public place are always looked down upon. I had no support from my family to go for these meetings,” she said. “I was always under suspicion by my husband, my marital family and my father, that I was doing something wrong. My character was always under question.”

On numerous occasions she faced mental, physical abuses for coming home late from meetings or for not being at home doing domestic chores. But she was determined to change her life and that of others with compassion and honesty.

Her first attempt was to take her husband along with her for the meetings and various trainings as a proof that she was not doing anything wrong. “While waiting to take me back home, he listened to conversations,” she said.That was the first time, there came an understanding. It has been over six years and the couple is learning to have mutual respect and understanding.

Women are often taught about their rights but not about the choices they can make. Nari Adalatcomprising of 15 women from tribal and non-tribal communities, most of them lacking formal education, but understand the reality of injustices from their lived experiences, are rewriting a story of change among other women.

With the belief that a holistic development is truly possible only when women are economically, socially and politically empowered, Professional Assistance for Development Action (PRADAN) a non-governmental organization (NGO), started conducting training programs on gender and patriarchy, for women of SHGs.

In 2015, a four-day residential training was conducted at Godda district for women of Saraiyahat and Poraiyahat administrative blocks. The 45 women participants from village organizations and SHGs were selected on the basis of their self-motivation.

All the women had similar socio-economic background, and they were mostly from ST, OBC and SC communities. Game-based modules helped them understand how women are controlled – sometimes by other women too – and face violence.

PRADAN conducted the training with case studies and movies, to trigger a reflective journey and build an understanding around concepts of gender and patriarchy and initiate the process of realization of gender-based discrimination.

The women understood the status of women in society and discussed how to change the status within their lives and impact other women. Gradually, they started to discuss about gender and women’s rights within their respective SHGs and in other women’s collectives.

The women of Poraiyahat block even began to speak at village level forums and at panchayats, where they received a lot of support from other SHG members. They started helping in mitigating conflicts and gender-based violence. Their work was getting recognized.

But the women felt that they lacked technical skills and that SHGs were not adequate platforms to end gender-based violence. As the cases were sensitive and needed regular follow-up, they felt that they needed a different platform to particularly focus on these issues.

After much discussion they formally launched a Nari Adalat in 2018. Nari Adalat translates as women’s court. The Adalat had 15 women, chosen from the women-led block level federation. The women counsel the victim and the accused.

The Adalat usually passes judgment unanimously, with support and consultation from PRADAN and District Legal Support Authority (DLSA), which provides free legal services through counseling and advice in the conduct of cases before courts or tribunals.

A register is maintained for documentation of the cases. “We have nominated our president and have four paralegals who maintain notice papers and judgment papers,” said Anita Devi, one of the paralegals.

Poornima Devi was a victim of child marriage and physical violence. “Though she was working as a bank sakhi, her husband used to beat her up ruthlessly in drunken stupors,” said Jayanti Devi a member of Nari Adalat. “But, she wanted to study further and wanted an to end her problem. She appealed to Nari Adalat for rescue.”

The women called both the parties. After much discussion, Nari Adalat decided that the abusive marriage should end. She filed for divorce. The women stood by her and finally she was able to complete her graduate course.

In an incident involving two different tribal communities, a teenaged girl became pregnant. There was a lot of furor, including death threats. The boy’s family was reluctant to accept the girl into their family. In the presence of Manjhi Haram, village head holding political and religious position in the tribal community, Nari Adalat intervened.

“We asked either to marry her or pay Rs 50,000 to the girl’s family for the welfare of the newborn. The boy’s family tried to use local influences against the decision,” said Rambha Devi, an adalat member. About 500 women gathered in support of the girl, along with local policemen. Though an FIR was lodged and the case continued for two years, the couple are together and have two healthy children.

The adalat is presently dealing with their 21st case. They have received much appreciation from DLSA and the districtadministration. Most of the cases dealt by Nari Adalat are related to gender-based violence, often meted out by their family members or larger society. And under the patriarchal system, they often go unheard, unnoticed.

Nari Adalat does not want to limit itself to providing justice to women in need. They aim to go beyond and take up deterrence strategy so as to bring down crimes around sexual and physical violence.

They often visit their respective SHGs and village organizations, and try to raise awareness around sexual and reproductive rights and take up issues of gender injustice. In many of the meetings within their groups and with PRADAN, they talked about the issue of marital rape.

They articulated how young women are forced to be physically intimate when they are not mentally or physically prepared. While India is among the 36 countries that do not recognize marital rape as a crime, Nari Adalat is trying to bring justice beyond the constitutional realm.

Binita Marandi (35), member of Nari Adalat narrated the pain and trauma of intimacy after marriage, as girls get married at a very young age. “They have no idea about family planning,” she said. “And men demand conjugal rights soon after child birth.”

Nari Adalat has firmly decided to visit every women-led community institution and try to raise awareness around the issue of consent in a physical relationship. They are preparing training modules for young girls, to make them aware of sexual and reproductive rights so that they can make an informed choice of their own.

Body politics is all pervasive yet so invisible in the general gender development theory. Rural women are not aware that they need to take up the ownership of their body and address its violation as a crime, which the Indian judicial system still fails to recognize.

Sharing the trauma and the violence that they have faced led them to understand that it is a system which exploits them. Changing their narrative was the only option, but they did not stop there. They have pledged to bring justice to every woman who faces gender-based discrimination, violence and humiliation, and to make her be aware to make her own choices.

Srishti Saha is a research intern with Jan Sahas. Earlier she worked as a development apprentice with PRADAN at Jharkhand. Views are personal.