Statistics reveal rampant gender-based violence and inequality in Odisha. A concerted multi-stakeholder effort is needed to bring about change, as government initiatives are slow in bearing results 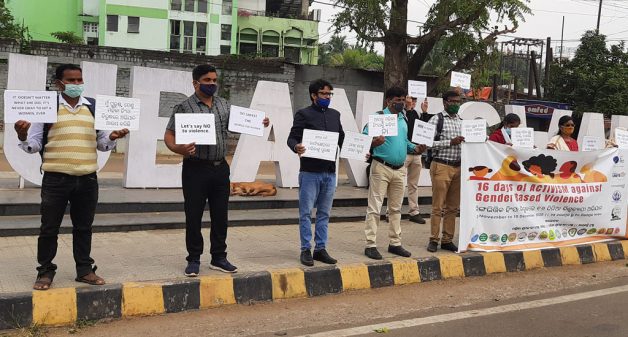 Since 1991, the world has been observing the 16 Days Campaign from 25 November to 10 December, against gender-based violence. It is observed in India too, as India became a signatory to the Convention on Elimination of all Forms of Discrimination against Women (CEDAW) in 1993.

Goal-5 of Sustainable Development Goals also highlights that ending all discrimination against women and girls is not only a basic human right, but is also crucial for a sustainable future. Unfortunately, cases of violence against women and girls in India continue to be high. Especially in Odisha, data paints a grim picture of gender-based violence and inequality in the state, despite government initiatives to address the same.

Odisha ranks poorly on the safety of women. The Crime in India 2017 statistics of the National Crime Records Bureau (NCRB) that was released recently reported that the percentage of crimes against women in Odisha is large.

Though Odisha’s population is only about 3% of India’s, the crime rate against women in the state was 5.6%. Odisha has been ranked as the second-worst state in the country in gender violence, after Uttar Pradesh. Statistics show that a total of 11,318 cases of molestation against women were reported in Odisha in 2019.

The NCRB report 2018 also shows a poor status of the safety of women in the state. Odisha tops the rank in assault of women and use of force and comes in second in the country in cyber-crimes and transmitting of sexually explicit materials.

NCRB report also indicates that cyber-based crimes have increased by about 76% in Odisha in 2019 (1,485 cases) compared to 2018 (843 cases). Similarly, the National Family Health Survey (NFHS)-4 report suggests that 35.2% of women in Odisha had faced spousal violence.

Last year, the Odisha government became the first state in the country by electing women as a third of its political representatives. The government has put in place various policy provisions to address and eliminate gender-based violence in the state.

One of the initiatives is Pari Express, a program of Odisha Police in partnership with UNICEF to create awareness against child sexual abuse. The department has also set up women and children cells in the district level police headquarters, to prevent crime against women and children.

Efforts have also been made to ensure that existing government schemes such as One Stop Centers and Emergency Response Support System remain operational. The state government has set up a fast track special court scheme under National Mission of Safety for Women, to dispose several pending sexual assault cases of children below the age of 12 years and of women.

During the outbreak of COVID-19, prolonged school closure, mental stress, loss of job and confinement have intensified the risk of violence for women and girls. To reduce it, Odisha State Commission for Women issued a social messaging helpline number in April 2020. The national single helpline 112 to provide all forms of assistance to people in distress is also operational.

“Despite the state government’s effort to address gender-based violence, many cases against women come to us. So there is a need of awareness and sensitization among people on gender-based violence,” said Snehanjali Mohanty, Member of State Commission for Women, Odisha. “In addition to the government’s effort in raising awareness of women’s rights and entitlements, the change should first start from our homes.”

“Women and girls face violence from their early lives due to orthodox social conditioning and stereotypes that continue to exist in our society,” said Pramila Swain, convener of Odisha chapter of National Alliance of Women Organization (NAWO).

“No one knows better than a woman or a girl on what hurdles she has had to face to enjoy equal rights and privileges like men,” said Swain. “How can women feel safe when their surroundings are unsupportive? We need better implementation of gender-based laws and policies to end gender-based violence in society.”

The Odisha government’s Economic Survey report 2018-19 has also revealed a worrying trend on women’s productive performance. According to the report, women earn nearly three times less than men in the state and women are still not considered a skilled workforce.

Gender-responsive budgeting concept emerged during 2004-05 by introducing Women Component Plan (WCP) in our country and the Odisha government became the first state in the country to have brought a separate budget on gender.

While presenting the state budget for 2020-21, finance minister of Odisha Niranjan Pujari announced that the state government has 77 schemes which are 100% women-specific.

Spending for various combined schemes and programs targeted with greater than 30% on the budget outlay was increased from Rs 4,0294.67 crore during 2018-19 to 5,1008.94 crore in 2020-21. Despite its promise, Odisha’s gender budget remains skewed and ineffective.

“Out of every 100 rupees, the state government has allocated merely 2.32 rupees for women in 2019-20 whereas the spending has further dropped down to 1.79 rupees in the year 2020-21,” said Pravas Mishra, a budget analyst who works with the non-profit Oxfam India.

“A bender budget cell is also functioning under Women and Child Development Department of the state government to facilitate the process of gender-responsive budget but lack of adequate resource allocation to this cell has limited their performances in this regard,” said Mishra.

“Gender-based violence is a long term development challenge and girls as well as women often experience violence from physical punishment to sexual, emotional or psychological violence. However, violence should not be treated as a personal affair – it must be reported to be challenged,” said Pragyan Paramita Bastia, state program manager of the state government’s 181 women emergency helpline service.

“However, to cherish a more secured and safer place for women and girls in our society, there is a clear need to shatter the cycle of violence,” said Bastia. It is hoped that the awareness programs such as the 16 Day Campaign would help.

“We are happy to be a part of the UN’s 16 days of campaign; we vow to never be a silent bystander and to be strong allies in raising our voices against outbreaks of violence that women are being victimized,” said Ruchi Kashyap, executive trustee of Atmashakti Trust, a development organization. “There is a need for concerted efforts from governments, NGOs and other stakeholders to end gender-based violence in our societies.”

Naba Kishor Pujari is a researcher, development professional and freelance journalist based at Bhubaneswar. Views are personal.