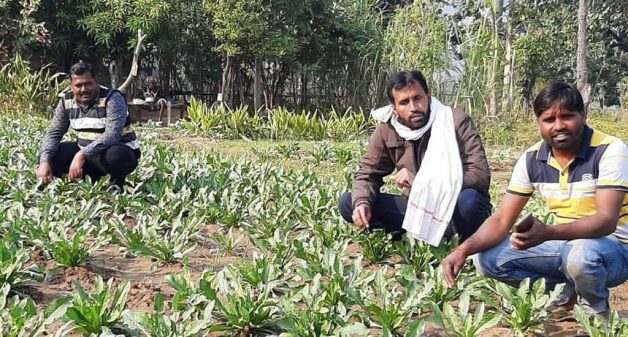 Anita Devi, a resident of Eghara village in Jharkhand’s Chatra district, sowed American saffron (Carthamus tinctorius) – also known as safflower – in November 2020, eager to improve her prospects. A small farmer, Devi’s main source of income is from potatoes and vegetables.

“I heard that American saffron is profitable. Just a kg of the bright yellow flowers can fetch Rs 60,000-75,000 in the market,” said Devi. “The flower can also be eaten as a vegetable, but is mostly prized for its color value.”

Apart from Devi, about 20 farmers have started cultivation of American saffron in Chatra’s Pratappur administrative block. As the forest department has been trying to eradicate opium, it has started promoting American saffron as an alternative.

Chatra is a backward Maoist-affected district. As opium, used to make narcotics, fetches high prices, farmers are often lured into its cultivation by anti-social elements. Its cultivation encroaching upon forest land has been going on in Chatra since 2004-05.

The most valued part of the plant is the latex or milky sap obtained from the seed pods. Jageshwar Singh of Kataiya village in Hunterganj administrative block said one kg of opium sold in powder form fetches about Rs 4 lakh.

But Chatra superintendent of police Risabh Kumar Jha said that opium cultivation is not only due to Maoist influence. “Illegal contract farming for supply outside the state is also responsible for its abundance,” Jha told VillageSquare.in.

“Opium, the cultivation season being October to March, is sometimes grown near small streams in forests. Cultivators reap thrice in this period though contractors from outside make the maximum profit instead of local farmers,” said Suraj Kumar Bhushan, forest range officer of Hunterganj.

“Jharkhand forest department has been destroying opium since 2017. Till now, 1,500 acres of forest land has been restored and opium worth over Rs 100 crore destroyed,” Sanjeev Kumar, regional chief conservator of forests, Hazaribagh division under which Chatra falls, told VillageSquare.in.

To know the location of opium plantations, the forest department takes the help of local people who are members of forest protection committees. Sometimes teams of up to 100 people go to destroy opium fields in dense forests.

To destroy opium multi-agency drives take place, said Jha. “In this Maoist-hit district, many areas are inaccessible and the police accompany forest officials,” he said. Tractors and earth movers are used to destroy opium crops. Laborers carry out the work where tractors cannot reach.

However Jageshwar Singh of Kataiya village feels that the forest department is not doing as much as it claims. “If the government really wants to end its cultivation, there will not be any trace of opium in Chatra,” he told VillageSquare.in.

“Through meetings and pamphlets we create awareness among people and inform them that opium cultivation is illegal and punishable,” said Bhushan, with about 350 acres of opium still existing in his Hunterganj range.

“Destruction of opium plants will help reduce narcotics addiction among youth and minimize exports to other parts of the country,” said Sanjeev Kumar. “The most positive factor is that green cover has also risen considerably since we have planted valuable trees like sal, mahua, sagwan and shisham.”

As opium cultivation uses a lot of water and destroys soil fertility, afforestation addresses these twin problems. The villagers believe that the water thus saved will be useful for growing paddy.

In Pratappur and Hunterganj blocks, American saffron is being promoted as an alternative to opium on a pilot basis, as the agro-climatic conditions are suitable. The crop does not require much water. “Though floriculture and pisciculture were promoted, villagers preferred saffron,” said Nishant Ekka, district program manager of National Rural Livelihood Mission.

“After the forest department encouraged farmers to cultivate American saffron, farmers got the seeds from Bihar in 2019 and 2020,” said Ashok Kumar, range officer of Chatra north division. “A few showed interest as it is legal and can fetch good money.”

Eghara village farmer Anirudhh Kumar’s task is to advice farmers on saffron cultivation in Pratappur, for which he received training for six days last year. Kumar is a farmers’ mitra or friend with the Jharkhand State Livelihood Promotion Society under the state’s rural development department.

“There are some tips which need to be followed after the flowers are collected,” Anirudhh Kumar told VillageSquare.in. “The flowers should be kept in a cool place where there is optimum shade and not dried in the sun at all.”

The plants normally grow up to a height of 3 feet. Over time several branches come out from below. In Hunterganj block, farmer Chandrika Yadav of Kursel village grew American saffron in October 2019 for the first time.

“Saffron seeds are sown in October-November. I harvested 500 gm in March 2020 from my first crop, and sold for Rs 30,000. I will earn a good profit with my second crop too,” he said. “Paddy and potatoes do not ensure much money.”

The average market rate of American saffron is Rs 40 per gram on some online sites. Inspired by Yadav, a few farmers have also taken to its cultivation, but not on a large-scale.

Not every farmer is as lucky as Yadav. Shankar Choudhary of Kataiya village cultivated saffron in November 2019 in less than an acre. “As I could not sell the produce I did not attempt again in 2020,” he told VillageSquare.in.

“I had purchased seeds worth Rs 300, and I got only a kg of flowers which I distributed to a few locals,” he said. According to Aniruddh Kumar, seeds sown on three decimals will yield up to one kg of flower – a good amount for first-time growers.

“Talks are on with dealers from Ranchi who have shown interest in buying the flowers. They will inspect the flowers in March and decide on the rates to offer farmers. Much will depend on the quality of the flowers,” said Anirudhh Kumar.

He said that he is urging farmers, especially women, to cultivate American saffron to turn around their fortunes. “If the farmers find a steady market, more people can start its cultivation in future,” he said.

Chatra Bhagirathi Singh of Khap village said the flowers of American saffron can even sell at Rs 85,000 per kg. He agreed that presently there are very few buyers. Though not as valuable as Kashmiri saffron (Crocus sativus), the cultivation of American saffron could still be a game-changer in Chatra.