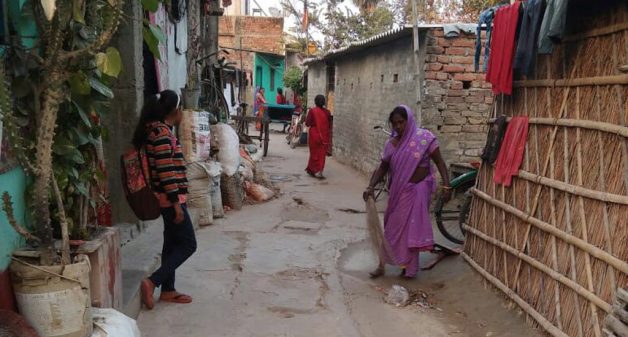 Hailing from a rural area in Bihar, Kusumlata had to have her breasts removed due to breast cancer, as otherwise it posed a high risk to her life. Though she was saved, her life became more traumatic after the mastectomy. After the breasts were removed, her husband stopped caring for her, because he no longer saw his wife attractive enough.

Her marital family did not offer any support during her hour of trouble. Other women also started taunting her, because in their perception she was no longer a woman. With such mindset, discussing about and screening for cancer are taboo, leading to breast cancer risk among rural women.

Women living in rural areas of Muzaffarpur, the second largest city of Bihar, said that they have heard about breast cancer. According to them it is the most severe disease in women, in which the breasts have to be removed, the husband leaves or loses interest and life becomes worse than the illness.

Awareness of breast cancer in rural areas can be gauged from the fact that women consider themselves feminine only from physical attributes. During awareness programs, the women were uncomfortable with questions about breast cancer and screening.

The women did not understand the need for an open discussion on the issue. It is still taboo to talk about the diseases or problems related to women in rural areas today. Women avoid talking about these issues even among themselves.

This is the reason that diseases related to women are more fatal in rural areas of the country than in the cities. Women are not aware of breast examination and cancer symptoms. In the absence of such awareness, a woman is unable to recognize any lump or other symptoms, which later becomes a danger to her life.

Lakshna, overcame her hesitation to talk and said that her sister-in-law developed lumps, which everyone ignored. Gradually the lump grew, her breasts became stiff and even started bleeding. Yet no one took it seriously and she kept on taking home remedies. The result of this carelessness is that it cost the life of Lakshna’s sister-in-law.

There are also many misconceptions among rural women regarding breast examination. They feel that a stranger touching and examining them is ignominious. So they feel uncomfortable even going for investigation. This is the situation in most rural areas.

Rural women mostly come for screening in the last stage of cancer, due to which treatment becomes extremely difficult. “About 90% of women do not know how to do breast examination themselves. Because of which they face more problems,” said Abhishek Anand, a well-known cancer specialist in Patna.

One of the major reasons for rural women not checking the breasts is the lack of pain in the lumps. Initial symptom is the formation of lumps, which are painless. So women take these as a common harmless problem. Gradually, these lumps spread, becoming a tumor. If the tumor is removed early, cancer can be prevented.

According to the population-based breast cancer registry, about 1.44 lakh new cases of breast cancer are being reported every year in India. Not much is known about its real causative factors. However, experts are of the opinion that women who start menstruation early and reach menarche late are more likely to get breast cancer.

Statistics from International Agency for Research on Cancer revealed that in 2012, in India 1,44,937 women had screening for breast cancer. The same year, 70,218 women lost their lives due to breast cancer. According to this report, about 2 lakh women die every year from it. By the year 2025, breast cancer cases are estimated to reach 4.27 lakh.

To tackle such a situation, there is a need to spread awareness about breast cancer among rural women, so that women come forward on their own, to get the screening done. Many rural women also want to hide their illness due to economic reasons.

They feel that if they get treatment, they will spend a lot of money and the family will have to face financial troubles. However, now there are some institutes in the country where the cost of treatment for cancer is very minimal.

Apart from this, along with the central government, many state governments also provide financial assistance for cancer treatment. While the center provides assistance under the Ayushman Bharat scheme, the cancer patients in Bihar get an assistance of Rs 80,000 to one lakh from the Chief Minister Medical Assistance Fund.

Experts say that in breast cancer, mastectomy is resorted to, only when the cancer is in its final stages. But due to continuous research and scientific discovery, now new technologies have been developed, making the treatment of cancer easier.

New medicines are available in targeted therapy, hormonal therapy and immuno therapy, due to which the treatment of cancer has now become largely painless. Apart from this, breast cancer can be prevented if certain measures are followed.

It is very important that mammography be done regularly as soon as a woman reaches the age of 40. Childbirth at the right time, emphasis on breastfeeding, control of obesity, etc. also play a role. Regular examination of the breasts by the women themselves is also important.

Women living in rural areas have to come forward against taboos so that they can lead a healthy life. Families should also change their mindset and offer support, as  screening and early treatment would help their women who are the foundation of the family.

Saumya Jyotsna is a writer with Charkha Features Views are personal.