Minstrels of Bengal who carry on traditional baul singing were hit hard by the lockdown. Ticketed live streaming has enabled them to sustain themselves and their art 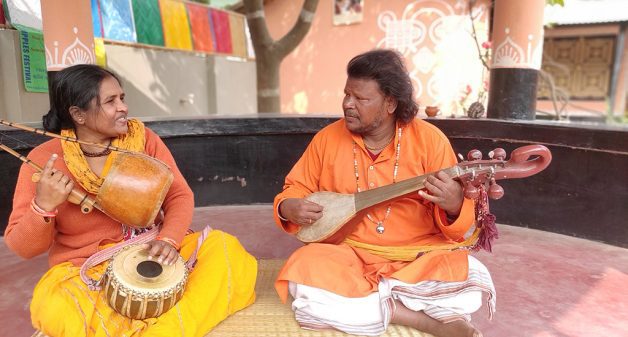 “As the bee flies from flower to flower collecting nectar, so does the baul move from place to place singing the name of Lord Krishna and gathering benediction,” sang Debdas Baul (67) holding his ektara, a traditional one-string musical instrument, seated in his single storey house at Suripara village, around 160km from Kolkata.

The mind soothing hymn of Debdas Baul summarized the life of baul fakirs, the mystic minstrels of Bengal who believe in equality of religion irrespective of caste and creed. Their members consist both of Hindus – primarily Vaishnavites or followers of Lord Vishnu – called bauls, and Muslims – generally Sufis or mystics – called fakirs.

The origin of baul singing is not known but the word has appeared in Bengali texts of the 15th century. Reference to baul is also found in the Chaitanya Bhagavata of Vrindavana Dasa Thakura as well as in the Chaitanya Charitamrita of Krishnadasa Kaviraja.

The singers, who have been continuing the tradition, lost their livelihood during the nationwide lockdown. With support from art enthusiasts, they have adapted to changing times, like going digital recently during the lockdown.

“We have been part of Bengal culture since ages and our ancestors lived doing madhukori – an ancient practice where bauls go from door to door in villages singing songs and receiving food grains,” said Debdas Baul.

The madhukori practice reduced with time since the bauls began to do stage shows and perform at fairs, which helped them earn their livelihood.

“It gave us recognition both nationally and globally,” Debdas Baul told VillageSquare.in “We managed to run our families through our performances.” He has visited countries like UK, Japan and Mexico, and has performed with writer William Dalrymple and singer Susheela Raman.

“The lockdown, however, came like a curse on our lives. Our events got cancelled and several others were postponed. We were reduced to paupers having no alternative but going back to madhukori to feed our children,” said Debdas Baul. He is not alone. Several thousands of bauls in Bengal became virtually penniless due to the pandemic-induced lockdown

“We were drastically hit by the lockdown and had to survive on the free ration that was being distributed by the government. With no source of income, we found it difficult to feed our families,” said Dibakar Das Baul (50), one of the renowned baul singers who reside in Paruldanga village in Birbhum district.

The situation had reached such an extent that some of the bauls had to drive e-rickshaws, sell vegetables and lottery tickets to feed their families. “They are still doing odd jobs for survival and have even moved to other cities to do any type of work for livelihood,” Dibakar Das Baul told VillageSquare.in..

Eventually, the bauls who were living in severe financial crunch got a ray of hope when moved by their plight, a group of art enthusiasts decided to come in support of them. “We have been following Bengal’s art and culture for a long time and were really moved by their pathetic condition during the lockdown,” said Pronoy Chakraborty.

Pronoy Chakraborty is a Kolkata based art historian, who runs Sahaje Swadhin, a collective of young artists and art historians. “We started exploring ways to pull them out of the crisis,” Chakraborty told VillageSquare.in.

Through his collective, Chakraborty decided to set up a digital platform for live streaming baul events. “We felt that online concerts would not only provide some financial incentive to bauls but would also help them spread their music globally.”

“Members of the collective arranged for equipment like tripod, cameras and others as most of us are art lovers and have such items. We didn’t charge anything from bauls for organizing the concerts,” said Chakraborty.

The team collected a nominal fee of Rs 150 for the first event that was held on 15 August last year where Debdas Baul along with his sons Lakshman Das (48), Gautam Das (40) and Uttam Das (36) performed for nearly 90 minutes.

“The response was beyond our expectation and we gave Rs 50,000 to them from donations and sale of tickets,” said Rishiraj Chakrabartty (29), a member of Sahaje Swadhin. “Significantly, most of the listeners were from outside Bengal and also abroad, proving that baul music is popular among non-Bengalese too.”

Sahaje Swadhin held two more ticketed shows in October and December, where people also made donations to the bauls. But poor internet connectivity in rural areas makes live streaming difficult. “We are mulling of recording the performances and sharing the links with those who make payment,” said Chakrabartty.

Help also come from Dara Shikoh Centre for the Arts, a Delhi-based organization working for India’s syncretic cultures. “It is really sad that the young generation of bauls is not interested to continue the family tradition, and opt for alternative livelihood. It is our duty to protect the legacy of the baul culture which is several centuries old,” said Jyotsna Singh.

Jyotsna Singh is the director of the organization and is also the granddaughter of Maharaja Hari Singh, the last ruling raja of Jammu and Kashmir. “We offered some financial help to the bauls and also funded the technical support in live streaming and other logistics,” Singh told VillageSquare.in.

Rina Das Baulini (46), wife of Dibakar Das, who has done six virtual shows in America and India since the lockdown, felt that the pandemic has opened a new avenue of livelihood for them. “It is true that the pandemic caused substantial loss to us. Many lost their source of income,” she said. “But we never imagined doing back-to-back shows for international audiences in the span of few months.”

“Till the situation turns completely normal, we have a medium to connect with our audiences,” Rina Das told VillageSquare.in. “We are artistes and music is our oxygen. We cannot live in a vacuum. The loneliness and non-performances in the initial months of lockdown had almost snuffed life out of us.”

Lakshman Das Baul (48), son of Debdas Baul pointed out that a Baul Academy is being established by the state government in Jaydev Kenduli, a small village in Birbhum district and a hub of baul singers, where existing bauls will train those having keen interest in learning the art and keeping it alive.

“The initiative would not only offer a livelihood to bauls but would also preserve our culture. The academy will also have a museum where certain artifacts relating to bauls will be kept,” Lakshman Das Baul told VillageSquare.in. “It will also have our musical instruments like etkara, dotara and dugi for sale.”

“The effort would play a major role in preserving our centuries-old culture. The online platform is a welcome initiative but not all would get the chance as there are thousands of bauls in Bengal. There should be more options of livelihood for us,” he said.

Gurvinder Singh is a journalist based in Kolkata. Email: gurvinder_singh93@yahoo.com Views are personal.