Providing an enabling environment transforms and empowers rural women. Building on their abilities, the women realize their potential to lead and become change makers 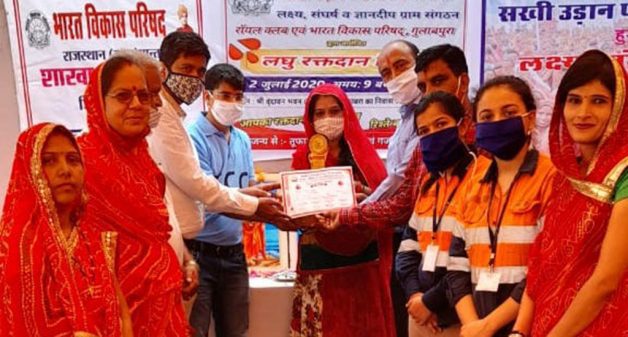 An enabling environment has empowered rural women, spurring them to initiate solutions towards community’s transformation (Photo by Naresh Nain)

Gender rights hold significance in a globalized world where increasing participation of women is expected, in order to ensure a holistic development of society. This resembles a coin where one side defines the actions of governments and nonprofit organizations pouring in resources to curb several menaces which prevail and emerge in several social spheres.

The other side of the coin portrays the failed image of unsuccessful engagements and studies which fail to capture the struggles and challenges faced by women who fight an incessant battle just to ensure they are not deprived of the basic necessities.

In India women comprise 65% of all agricultural work force. By nature women are multi taskers. They take the lead and manage work and home fronts. In the whole process of multi-tasking, leadership as a personality trait is pivotal. An enabling environment catalyzes a transformation, creating leaders.

The Sakhi project, supported by Hindustan Zinc Limited and implemented by Manjari Foundation, a nonprofit organization, has enabled the empowerment of several women. Some of these empowered women took it to the next level, demonstrating their leadership traits and transformative actions.

Sakhi project was started in 2015. The project focuses on building independent women institutions to bring in rural women towards a productive front, by uniting them and enhancing their collective potential to be change makers.

It also aims to enhance the quality of life in rural areas through women-led development initiatives by promoting sustainable livelihood through micro-financing and enterprises development. Capacity building, financial inclusion, livelihood creation and microenterprise management are the core themes being covered under this initiative.

Research has proved that leaders are mostly made. This applies to several residents of several villages in Bhilwara district of Rajasthan who have broken several taboos and come out from age-old patriarchal system.

Asha Devi Balai (27) is a resident of Sultanpura village in Bhilwara district of Rajasthan. As per the local custom. she got married at the age of 18, which meant her education stopped at class XII. However, after marriage she pursued her graduation.

Balai, a mother of two, became a member of Veer Tejaji self-help group (SHG). As part of the Sakhi project, she attended several meetings and trainings, which broadened her outlook.  She took loans from her SHG to support her family. She helped the SHG by taking care of the bookkeeping.

She was later elected as the representative of their village organization, a federation of SHGs. She started a food bank in her village and several destitute benefitted with her initiatives. Her leadership qualities got her elected as the president of Sakhi Udaan Federation, when it came into existence in 2018.

She led several awareness and relief campaigns during the COVID-19 pandemic. From crafting masks to distribution of ration kits, from preparing the kadha – an herbal immunity booster – to its distribution, from organizing blood donation camp to supporting destitute amongst crisis, she was at the forefront.

Her involvement made her so popular that women-led institutions approached her and insisted her to contest the panchayat elections. She was nominated for the post of sarpanch for Badla panchayat. She won the election held in October 2020 and became the sarpanch of her native village.  She represents six villages now.

Residents of Hurda tehsil found the water supplied to them of poor quality, resulting in gastrointestinal problems. Asha Balai, president of the federation, and the Sakhi women held peaceful agitation, adhering to the law. Within 15 days, the administration ensured the supply of potable water to the residents of Hurda.

Sakhi women, encouraged by Asha Balai, took the initiative of saving lives by donating blood. Every blood donor is a life saver and women-led institutions came forward for this noble cause. Irrespective of several women being weak, and vitamin deficient, they had the zeal to contribute. They donated 51 units of blood.

During the pandemic Sakhi women, through the village organizations, prepared kadha, an immunity-boosting herbal drink, and supplied to the community. Also, they were actively involved in procurement and distribution of rations, masks, sanitizers, fruits and vegetables and other essentials to the needy ones.

As of now the number of women beneficiaries is nearly 27,000. The project aims to form 2,300 self-help groups reaching out to 27,500 families in five years.

Women from rural backgrounds are now a part of a budding social development that resolves to promote women’s institutions These bustling centers of social justice and equality have led innumerable women from marginalized communities in towards rural transformation.

Change is a gradual process and social development as a domain is all about changing the mindsets, outlook and human conditions. Change as a process requires conditioning, guidance, motivation and continuous support.

The outcome of the change process is a state which stimulates the sense of agency. Leadership is the outcome of the same. It may take time, it may test the patience, it can invite challenges, but it’s worthwhile to create a platform which fosters gender equality, and helps women leaders be the catalysts towards change.