As fear of coronavirus gripped villagers during the initial phase of lockdown and their livelihood was lost, a federation of women introduced insurance schemes for their benefit 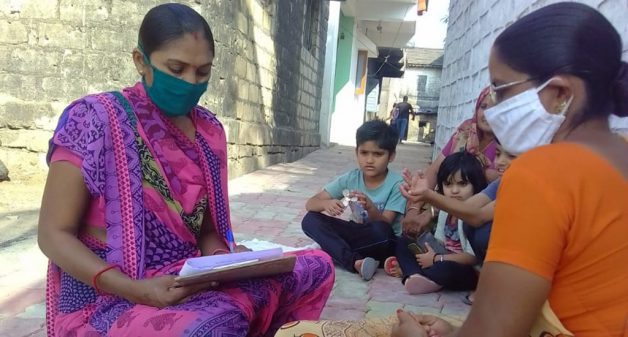 The insurance introduced during the lockdown has been of immense support to many villagers (Picture Courtesy: Varshaben Rathod)

After functioning as a self-help group for many years, Sorath Mahila Vikas Mandali is now a cooperative of women. After the first self-help group (SHG) was formed in this region of Gujarat in 1992, with support from Ambuja Cement Foundation (ACF), the SHG movement has become strong. The Sorath federation has 9,000 women members from 39 villages. (READ: Women in Gir stand up for dignity of widows)

To meet the rising needs of masks in the region and Ambuja Cement office in Kodinar, the federation roped in its network of women for making masks. So far the women have stitched and distributed over 30,000 masks.

Pandemic became the most engaging and active period for the members of Sorath federation. The women mobilized necessities to reach the needy families. But the most significant contribution of the federation has been the insurance scheme that they initiated during the pandemic.

For villagers, the immediate concern was the need for food grains, as the initial intense lockdown left them with no source of income. Members of Sorath Mahila Vikas Mandali decided to share basic necessities in a food kit.

The coordinator who is in charge of a cluster of about five villages and active members of the federation coordinated the preparation and distribution of dry ration kits. “It was heartening to see members coming forward to contribute and reach the needy,” said Motiben Chavda, president of the Sorath federation.

The food kit consisted of 5-7kg of wheat, 3 kg of rice, a kg each of sugar, onion and oil, besides 500 gm of toor dal. “We distributed more than 3,000 kits to 351 households from 39 villages,” said Rekha Jadav, one of the members of the federation.

The kit cost between Rs 300 and 700. Most of the items were taken from Mahila Haat, the cooperative’s store in Ambujanagar of Kodinar administrative block. Farmers also came forward in donating grains and available items, for which collection centers were set up.

Onset of lockdown led to sudden scare among people as information about the pandemic and safety precautions to be followed reached the villages late. The villagers’ concern was the need for money in case of a health emergency. Taking this into consideration, an insurance scheme was announced.

The women belonging to Sorath federation, and the cluster coordinators contacted villagers through calls and messages via mobile application groups, effectively using their digital literacy trainings. They ensured that information about the insurances reached the villagers. They also coordinated the process for those who sought insurance.

“Whether it was informing people about the insurance or informing about the coronavirus, we even used platforms like Google Meet to connect with people as in-person meetings were a challenge,” said Rekha Jadav, who is also in charge of the cluster coordinators and the Mahila Haat.

First COVID-19 Insurance was announced in this region jointly by Better Cotton Initiative (BCI) and ACF for farmers. “Initially we launched an insurance scheme for farmers associated with BCI,” said Shailesh Dungrani of BCI. Later another scheme was introduced so that everyone could benefit.

The insurance was registered with a contribution of Rs 100 by farmers and Rs 125 by BCI. After the continuous need in the region, yet another insurance scheme was initiated for an amount of Rs 20,000. For this policy, the premium amount was Rs 240. For these policies the GST amount of Rs 15 was borne by the federation.

Enrolling for the insurance scheme was simple, where the villagers had to submit the Aadhar card and bank pass book photocopy. Over 500 men and women farmers, besides SHG women of Kodinar block took the insurance.

“The insurance was the most crucial support for people, since they had to leave their houses and go for work, facing the risk of getting coronavirus infection, after the lockdown rules were relaxed partially,” said Motiben Chavda.

In case the earning member of the family tested positive for the virus, the entire family would have suffered and faced the financial brunt. The claim required the authorized center’s report within 15 days. The insured amount of Rs 20,000 gets credited directly in the insurer’s account.

The insurance was inclusive, in that, it did not exclude people with co morbidities from receiving the benefit. Over 94 claims have been approved and more are under process, to ensure fulfillment of basic necessities of the household.