Be it farming practice or awareness on nutrition and coronavirus infection, 90.8 Green FM has been helping listeners get accurate information in formats that appeal to them 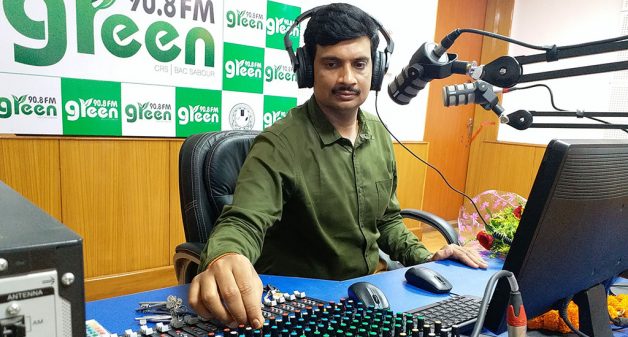 At 6.30 in the evening, seven women of Barhari village of Bhagalpur district in Bihar gathered at the veranda of Pratima Devi who fixed her radio on a table. Five children, though playing in the courtyard, had their eyes and ears on the radio. Suddenly, a sweet voice emerged from the radio and everyone became silent.

“Aap sun rahein hai 90.8 Green FM, Hariyali se Khushyali tak …. (you are listening 90.8 Green FM, from greenery to happiness), announced Annu, the RJ. After sharing some important news including the status of the coronavirus infection in the district, the RJ introduced Sameera, a local girl, as the Sunidhi Chauhan of Bhagalpur, Chauhan being a popular playback singer.

As soon as the women and children heard the first few lines, they started clapping since the folk song that Sameera sang was in their local dialect. The children dispersed after the song got over, while the women stayed on to listen to the weather forecast for the next five days.

By presenting programs in a format and dialect that would appeal to the local population, the 90.8 Green FM community radio, has been having a big influence on listeners regarding farming practices, nutrition, etc., besides busting fake news.

In a very short time, it became a platform for the promotion of local culture and dissemination of government schemes. Ishwar Chand, the officer-in-charge of the media center at BAU, said, “90.8 FM Green has transcended all the boundaries that we had planned for.”

“Now we have songs, popular stories, announcement and explanation of government schemes, and health advisory for the common people, in addition to agriculture-based programs,” said Ishwar Chand. “During the coronavirus pandemic too, we helped people with all the necessary information.”

The community radio station has been a new but effective extension tool in the armory of the agriculture university. “We find it more effectual as now more and more people irrespective of age, gender, and economic status are tuning into our station,” said R K Sohane, vice-chancellor of the university.

“Our team has been able to mix educative messages with entertainment and present them in a format that everyone likes. Songs in the local language with agricultural advisory are very popular among farmers,” said Sohane.

This radio station broadcasts different programs on good practices of agriculture, agripreneurship, and other farming-related activities. These programs are developed and recorded according to the need and demands of the community.

Scientists of the university not only share their expertise during the recording of such programs but also answer the questions of the audience during live programs. The audience can ask questions through a telephone call, mobile application, or by comments on radio’s social media page.

Rakesh Kumar,a 24-year-old farmer of village Kashimpur, finds these songs very useful. “It is easy to remember the information because they are in the form of songs. Once one likes the tune or melody, we keep singing and humming the lyrics,” he said.

90.8 FM Green collaborated with UNICEF to air a pre-designed communication campaign in the areas of its coverage. The program that focused mainly on the nutritional security of women and children, was very effective.

The radio station ran the message highlighting the need for including green vegetables and pulses in their regular food. The message was broadcast five times a day continuously for 30 days and it was very effective.

Commenting on the influence of the message, Sajju Devi, a villager, said, “Now mothers are serving and cajoling their children to eat vegetables and dal. The local health worker has also started requesting pregnant women to eat healthy green vegetables in more quantity. Such messages are really useful for us.”

This community radio station has been playing a pivotal role in disseminating accurate information during the COVID-19 pandemic. Based on the government’s guidelines and with the help of UNICEF, appropriate contents were developed on the methods of stitching a mask, advantage of putting on the mask, social distancing, hand hygiene, etc.

The FM station played a very crucial role in informing and educating people since there was a lot of fake news and information circulating through social media. “As 90.8 FM Green is a reliable source of information, whenever we heard something scary or confusing, we relied on the radio and most of our doubts were cleared,” said Soni Devi, a primary school teacher of village Karhariya.

“We not only warn our audience about the fake news but also tell them the facts,” said RJ Annu. “Our 90.8 FM Green team physically visits different villages and conducts a program called fact-shala during which we trained villagers to differentiate between fake and reliable news.”

Angika, the language spoken in Bhagalpur, is one of the oldest languages and is mostly spoken in Anga region which includes parts of Bihar, Jharkhand, and West Bengal. The program named Ang-Umang broadcast in Angika language is very popular.

Tarakant Thakur, a folk singer of Nathnagar village, whose songs were aired during the Ang-Umang program was very happy and proud. “This radio station is a good platform to showcase local talents,” said Thakur. “Frankly, I am thrilled to listen to my songs on the radio.”

The station’s experiment of presenting scientific information in the form of Angika folk songs was very successful and the program could establish an emotional connect with the listeners very fast. With the help of locally known and respected experts, the station arranged talks on issues like stress management and managing children during the lockdown.

Both rural and urban audiences liked the region-specific programs and requested repeat broadcasts of many of the programs and even for increased duration of broadcast. Keeping the increasing popularity of 90.8 FM Green in view, the broadcast time was extended from three to 12 hours per day.

90.8 FM Green has a digital presence with accounts in Facebook, Twitter, and WhatsApp. The team uses its social media accounts to post news, upcoming events, and announcements by the university and also to get feedback. With the help of their social media accounts, they encouraged local artistes to send their songs, stories and experiences which were later broadcast, depending upon their quality.

“Although we have a very small team and have many limitations, we have done exceptionally well during the last year,” said Ishwar Chandra. “Our contribution during the COVID-19 pandemic is very satisfying for me and our university.”

Limited transmission range of 20 km radius has been a concern for the university. Encouraged by its popularity, Sohane is planning to make FM Green programs available across the state. “We are developing a mobile app for the wider dissemination of our programs,” said Sohane. Once ready, people can easily access all the programs and can also tune in to the live programs.”

Radio is back and is popular again. Localized broadcasting through FM radio, such as by 90.8 FM Green, has picked up very fast. Its successful application in providing information on various aspects is commendable and should be replicated.