Farmers who were in the brink of starvation during lockdown were identified through vulnerable mapping. With quality seeds and training in better practices, they are reaping better yields 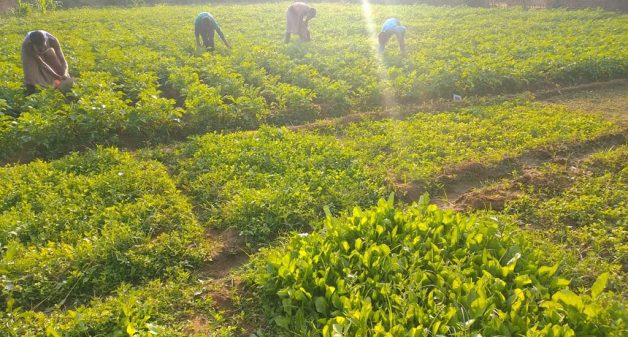 Fields of farmers such as Raut, who were in the brink of starvation, show increased yields because of better farming methods

Binod Kumar Raut (44) is a traditional farmer in Vill-Nawadih of Dhondli panchayat. He and his seven-member family practice agriculture in their village which is in Jama administrative block of Dumka district. In addition to farming their land, Raut and his son take up labor work to make ends meet.

During the pandemic-induced lockdown, like a majority of the villagers, Raut’s family too faced many hardships. There was no labor work. Due to lack of transportation facilities, they could not take the produce from their farm. The markets were also not functioning, leading to a lot of losses for Raut.

A few NGOs that visited villages to create awareness about the coronavirus and the precautions that villagers had to take to prevent spread, noticed the plight of the farmers. The NGOs’ intervention has helped villagers get through the lockdown.

To sustain his family during the difficult period, Raut was forced to borrow money from the local money lenders. That was his only means of ensuring that the basic needs of his family were met. Yet, he and his family had to reduce the quantity and frequency of their food intake, which had an effect on their health.

Of the 112 decimals of land that Raut owns, 79 decimals are cultivable. With the hope that transport would be resumed by the time of his crops’ harvest season, he borrowed money to buy paddy seeds, so that he could sow during the kharif season.

Ashok Pandit (47) of Tapasi village, in Jama administrative block, is one of the farmers who went to the brink of starvation. Farming in his 62-decimal land was just enough for the survival of his six-member family and for the educational needs of his children. Government support seldom reached him or his village.

Pandit’s eldest son migrated to Delhi in search of a better job opportunity so that he could support his family. But he was forced to return to his village at the start of the lockdown. As there was no transport during the first phase of the intense lockdown, he had to walk long distances.

As the continuous walking affected his health, he took whatever means of transportation were available, so as to reach home. This resulted in him spending all of his savings of nearly Rs 17,000. As he returned home empty handed, Pandit had no option but to borrow money to run his household and to buy seeds for his kharif crop.

Lok Prerna, a non-governmental organization (NGO) based at Jama block of Dumka District, started working in the villages of the district during the pandemic. As the scare of the infection spread, the NGO worked to create awareness on COVID-19 and to educate villagers about the health, hygiene and safety measures.

In association with the local administration, the NGO provided vegetable seeds of horticulture crops such as potato, cauliflower, tomato, peas, besides that of wheat and pulses. They also supplied micronutrients and bio-fertilizers free of cost at the farmers’ doorstep.

The organizations, with financial support from Standard Chartered Bank and technical support from Transform Rural India Foundation, a Delhi-based development organization, and provided the best varieties of seeds along with Tricoderma viride, a fungicide, for soil treatment.

The farmers were provided training in package of practices for six vegetable crops, for better results from cultivation. The team also made regular follow-up visits to ensure the farmers were practicing the suggested methods, so that they would get increased yields.

Raut is happy with the result. The new practices that he follows shows results in the form of better crops and better yields. Farmers such as Raut and Pandit who received support, are happy that helping hands have pulled them from the brink of starvation to better yields and better income.