Growing paddy the traditional way pushed farmers into poverty as the yields were low. Switching to SRI method has helped them harvest more than twice the normal yield 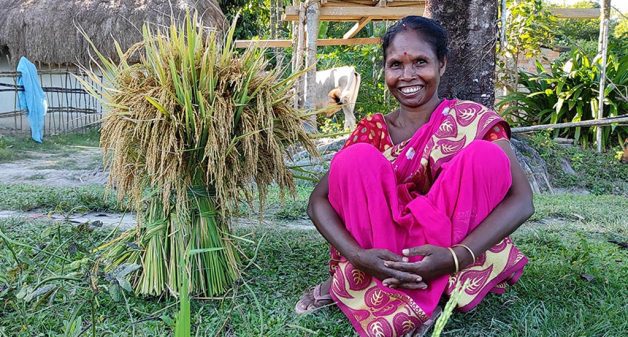 By practicing SRI method of paddy cultivation, farmers like Asrita Kerketta have harvested more than twice the normal yield (Photo by Barhunkha Mushahary)

Modhupur is a remote village located near the foothills of Eastern Himalayas in Baksa district of Assam. The villagers belong mostly to the Adivasi community, who migrated during the British rule and were engaged as tea garden workers.

Over a period of time they settled around the tea estates and integrated well with the local people. Eventually, they moved beyond the tea estate work, and opted for different livelihoods ranging from reputed government jobs to daily wage labor.

Considerable number of villagers have migrated to metropolitan cities and nearby places as factory workers, guards and skilled labor. However, a majority of the villagers are into agriculture for livelihood. Most of them are marginal farmers.

They cultivate paddy and seasonal vegetables for their own consumption and sell the surplus. Their cultivation is highly dependent on monsoon and dongs – which are canals used for irrigation during dry seasons with water diverted from rivers flowing across the villages.

These rivers run dry for more than five months (November-March) as do the dongs, resulting in poor Rabi cultivation that takes place between November and April. Hence villagers grow paddy the traditional way only during the monsoon season. Switching to SRI method has helped them double their yields.

Modhupur residents have been following the traditional method for cultivation of crops. They use oxen for ploughing and cow dung for fertilizer. They do not use pesticides or any pest control mechanism in their field, as the few infestations of stem borers and Gundhi bugs that did happen did not cause major harm to their crops.

It was in May-June of 2020 that Seven Sisters Development Assistance (SeSTA), a development organization, started training the villagers of Modhupur in System of Rice Intensification (SRI) method of paddy cultivation and use of homemade organic pesticides and fertilizers.

Modhupur was chosen after the executive members of the village organization identified it as one of the poverty pockets in the panchayat. SeSTA decided to introduce the SRI method, which increases the yield almost twofold, with minimal input cost.

Modhupur has nearly 350 households, with more than 90% of them involved in farming. About 250 villagers participated in the trainings initially but some of them backed out and did not complete the training. The main reason of backing out was lack of exposure. There are no SRI fields close by and the villagers could not be taken to other sites because of the lockdown.

The SRI paddy cultivation was a new concept for the entire village and hence they were skeptical about its result and found it risky to adopt. Already bogged by the lockdown and its impact, they did not want to take any chances. Due to apprehensions, the number of families willing to follow SRI method came down to about 50.

Given the lockdown, the villagers had no cash and could not buy seeds. Hence seeds were distributed to the participating farmers. “I did not know what SRI was till SeSTA trained us. Now I have donated my land to my new brother SeSTA this kharif, either it yields double or half almighty will take care,” said farmer Asrita Kerketta jokingly, at the beginning of the cropping season.

Kerketta was hesitant in the beginning. She and her husband used to cultivate paddy in their 1.5 acre land every year during the kharif season of June to October. But in 2020, they cultivated kharif paddy in 0.7acre with SRI method. The hard work paid off; instead of 7.2 quintal yield last year in the 0.7 acre land they got 16 quintal paddy through SRI method.

During the harvesting, seeing the lush green paddy panicle loaded with paddy seeds Kerketta said, “I thought this year my paddy crop would be wasted as I never imagined a single seedling could produce 40 to 50 tillers. I wish I had cultivated my entire land using SRI method. Next year I will definitely use my entire land for SRI paddy cultivation.”

The families that cultivated paddy using SRI method for the first time got a minimum for 40% increase in yield. “Next year I will use my entire land for SRI method paddy cultivation even if it takes extra effort, I am a marginal farmer and farming is where I need to put energy,” said Robin Lakra of Arnibil hamlet of the Modhupur village.

The farmers now continue to make their own fertilizer and pesticide and use it in their vegetable crop as well. Some women have started using the organic pesticides in their kitchen garden, which helped them control aphids and other pests. Some even used in infested wounds of their livestock and found the pests falling dead.

Gulapi Tete, an SRI paddy cultivator of No 1 Modhupur hamlet of Modhupur village, is now selling vermicompost to the neighboring villages. Even in the initial stages of production, he could earn Rs 2000 in a month.

“I applied jeevamrit and vermicompost in kharif SRI paddy and the result was extremely good. People heard about it, and now they are buying it from me,” said Gulapi Tete. “The entire village will be ready to cultivate SRI paddy next year.’