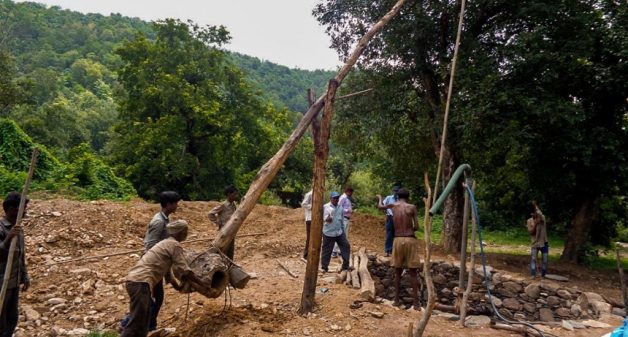 “Water has been such a big problem for us. I’ve had to walk for hours in the morning, most of the time with my children, to get to the nearest source,” said Geeta Devi of Tindori village in Phalasiya panchayat of Udaipur district. “During summers the problem became even more severe, as the streams dry up and water levels drop.”

For decades women like Geeta Devi, and children of Tindori, a tribal hamlet in southern Rajasthan, took the same long, laborious journey, walking barefoot for over 2 km to fetch water for their household use. Monsoon season offered some relief, creating small natural rivers; but these were only temporary sources of water. The streams eventually dried off.

However, last year, another obstacle placed itself between the much-needed water and those who fetched water. COVID-19 and the lockdown. With restrictions preventing movement around the country, the villagers realized how crucial it was to have their own source of water closer home. The lockdown brought the villagers together in building a closer water source.

Located near Gujarat border in the dense forests of Jhadol, at about 70 km from Udaipur, Tindori is a remote village. 35 families – most of them Kathodi tribes – inhabit the village, spread across a vast mountainous region. Cut off from the main roads and far from the nearest town, many villagers either migrate to nearby cities for work or sell forest produce for survival.

Approximately 80% of the families in Tindori practice subsistence agriculture to support themselves, usually selling the remaining produce at local markets. However, because the area suffers from water scarcity and regular droughts, the land is very dry, with little irrigation.

The villagers depended on a well located about 2 km from their settlement. They also took water from temporary sources such as small rivulets and khadds or gullies that came alive during monsoon seasons.

The old and dilapidated wells were often a hotbed for waterborne diseases. There have been incidences of animals and even people, falling into the wells. Often, during monsoon, dead animals, mud, and feces are washed into the well.

The filth that got washed into the well contaminated the water, resulting in ill-health. Unable to fund proper medical care, people’s ability to work got reduced greatly. “Incessant stomach pain and vomiting are very common here among women and children,” said Kailash Ram, one of the villagers. “They suffer from these issues on and off.”

The villagers have always had water problems. But the lockdown saw increased demand for water from households. This prompted Bita Ramji, the village head, to seek support through an agriculture paraworker of Seva Mandir, a development organization.

Seva Mandir had started engaging with the villagers in March 2019 as part of a sustainable livelihood project. During meetings with villagers, the organization’s team mooted the idea of collective action, and helped them form the village institution, a collective of households and members from the village.

Members of the village institution started discussing ways in which they could best utilize their time and gather resources to create a water source in the village. They decided to carry out the work during the lockdown.

The villagers knew that by digging a well and building a protective wall, the current dangers could be removed, greatly reducing the chance of waterborne diseases and therefore reducing medical expenses. The work would also keep the villagers engaged during the lockdown.

The older members of the community suggested a site for the new well based on their traditional knowledge of availability of water. The new site is close to the gullies that fill up during the monsoon, thus ensuring that the water is available for a longer period.

The plan involved every adult member from all families coming together to design and dig the well before the monsoon season started. In June a total of 50 men and women got together and started digging a community well in the hamlet. Each family contributed funds for materials, in addition tos labor.

It was very much a collaborative process with younger members of the community, who already knew construction, also piching in. It was difficult to remove the dug earth out from the site without any mechanical support.

However, with the help of the elders, the community utilized their traditional knowledge and built a makeshift manual winch with bamboo and rope, a method traditionnaly used in the area years ago.

It took the community nearly four months to complete digging the well of 35 feet depth. The youth brought stones that were available in the ravines, to create a stone boundary wall around the new well. The hard work of the community resulted in a fully functional well in four months.

With the community members coming together and taking matters into their own hands, they have already seen an enormous difference in themselves and their livelihoods, as well as opening further agricultural opportunities for the farmers in the village.

Due to low rainfall in the area and lack of water conservation structures, almost all the families faced difficulty in irrigating their farms. Hence they have been practicing rain-fed cultivation only for three months, growing a single crop per year.

Though collecting and selling forest produce including mahua, gond and tendu remain a major source of livelihood, with the availability of water, farmers have started experimenting growing soy bean, black gram and pigeon pea.

“We never thought COVID-19 would help us solve such a huge problem,” said Sarla, one of the villagers. “Now I do not have to walk far.” The new well has saved women the time they spent on fetching water. They have started becoming members of self-help groups. The idea of collective savings and group support towards a better future are already evident.