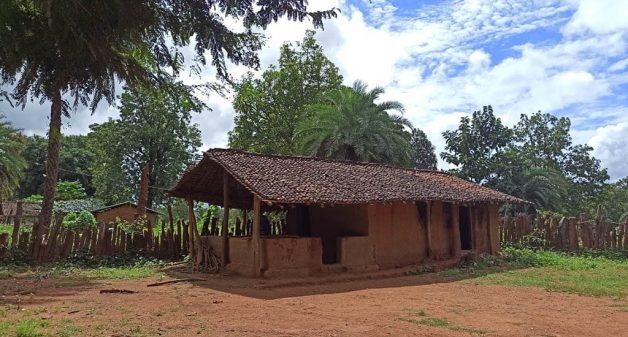 Ramlal Dugga, a tribal youth from Edka panchayat in Narayanpur district of Chhatisgarh, holds a post-graduate degree, a rare accomplishment in these parts. Besides being good at his studies, Dugga is also keen on conserving his unique cultural identity.

Dugga is one of the members of an Adivasi youth group recently formed in the village in Bastar division. The group’s main aim is to promote ghotuls, important centers of learning and culture, popular among the Gond and Muria tribes. Apart from Ramlal, there are 25 members.

Ghotuls are spacious hut-like structures once found in abundance in many villages of Bastar division comprising seven districts, but are on the decline at present. In Narayanpur Kondagaon and Kanker districts, several ghotuls used to exist even a few decades back.

At these centers, grand festivals were the order of the day. Music and dance kept attendees entertained and tribal youths selected their life partners. To revive the concept of ghotuls, theChhattisgarh government has recently announced the construction of 100 new structures and the repair of existing damaged ones in many villages.

Dugga said that there used to be one ghotul in each village even some decades back. “Even now many of us visit ghotuls, usually in the evening between 7 pm and 10 pm,” Dugga told VillageSquare.in. “Generally youths in the age group of 18-22 frequent these centers.”

One of the primary reasons behind the gradual decline of ghotuls is the predominance of the modern education system. As many youths attend schools and colleges these days to join the mainstream, ghotuls are not used anymore. “In some places the ghotul culture is also ebbing away as many youths have started working and earning livelihoods outside,” said Dugga.

As schools opened up to cater to tribal children, ghotuls closed down as many skipped them due to study pressure. Once, ghotuls served a lot of other purposes as well, but their importance has reduced with the coming up of community centers in villages.

According to Jeet Singh Arya of Unexplored Bastar, a travel start-up which promotes Bastar’s culture and heritage, it is a learning place where youths learn how to take on various responsibilities in life as they mature in age.

“Dance and music have always been integral to the ghotul culture,” Arya told VillageSquare.in. “Traditionally, men used to impress women by dancing and gifting them wooden combs.” But outside the Adivasi world view the ghotul is often viewed as a place for free mingling between the sexes.

The Maoists also discouraged the concept of ghotuls during the turn of the millennium, due to the fear of tribal unity and uprising. So, in many villages, ghotuls have been deserted and are a reminder of the past.

Hem Singh Thakur, who works with Arya, said during his research he came across several elderly people who complained that the modern system of education discouraged children from attending ghotuls and teachers for not keeping alive children’s interest in their cultural identity.

According to some villagers, the sway of left-wing extremism, especially during the time of the Salwa Judum, a unit of tribal youth that the government trained to counter insurgency, also dealt a blow to ghotuls as Maoists wanted youths to join their forces.

“As a lot of important decisions used to be taken during meetings held in ghotuls, the Maoists sometimes exerted pressure on those who frequented these places,” Laxman Singh Dugga, sarpanch of Palki village, told VillageSquare.in.

A healthcare worker who works in Abujhmad area of Narayanpur where Maoists still hold sway, said on condition of anonymity, that as ghotuls symbolized tribal unity, the extremists wanted to disintegrate these centers. “Abujhmad still has ghotuls due to the absence of proper schools,” he said.

“It is a good thing that the government has realized the importance of ghotuls and their special connection with Bastar’s tribal culture,” said Arya. As part of the government initiative, Arya and his team visited ghotuls in Narayanpur district in November last year.

Edka gram panchayat secretary Santuram Sori said as ghotuls still exist in a few villages, efforts are being made to save them. “A proposal has already been passed and work will soon start on revival,” Sori told VillageSquare.in.

Edka sarpanch Sunita Mandavi said that an old ghotul still exists in Katulbera in Narayanpur. “These days some students who attend schools do visit ghotuls on Saturdays, but they do not stay at night,” said Mandavi.

“Most of them start frequenting ghotuls at the age of 15 or 16,” Mandavi told VillageSquare.in. “Earlier, ghotuls used to be made of mud and some of these beautiful structures can be still seen in Kondagaon district.”

Arya feels that ghotuls can be an ideal way to promote community tourism in Bastar. “We want to conserve ghotuls through tourists and want visitors to enjoy, dance and celebrate with the tribes,” he said. “Though ghotuls still exist in interior villages, a lot of changes have crept in some of them where girls are not allowed to stay at night.”

Following Chief Minister Bhupesh Baghel’s announcement, the Narayanpur district administration is gearing up towards the revival of these structures, some of which lie outside the villages. Some of the ghotuls have an open area ideal for dancing, while the closed ones are meant for stay.

Narayanpur collector Dharmesh Sahu said that Rs 5 lakh would be spent on each ghotul and local artisans roped in for the renovation and repair work. According to Sahu, as part of the process, local culture will be respected and locally available materials used for the work. A team of experts from the Pt. Ravishankar Shukla University in Raipur has also been roped in for consultation.

“It is fortunate that some ghotuls are functional in the interior villages. We visit these for meetings and a lot of youths come. They dance and play music. Some of our community members are trying to make people aware about ghotuls,” said Mahendra Mandavi, primary school teacher of Garh Bengal village.

“Many parents do not send their children to ghotuls nowadays as they feel it is a waste of time,” Mahendra Mandavi told VillageSquare.in. “But ghotuls will ensure the continuance of our culture.”