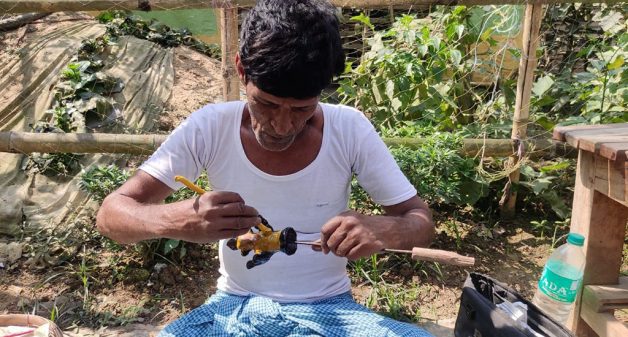 Brindaban Chanda is the lone artisan practicing shellac doll making that shows signs of revival, after a shellac Ganesha was presented to prime minister (Photo by Gurvinder Singh)

Brindaban Chanda, a lone artisan making shellac dolls or galar putul, in Bengali parlance, is the living symbol of a dying art. The 65-year-old stays at remote Paschimsai village in Potashpur administrative block of East Medinipur district, around 180 km from the state capital Kolkata. The rest of the artisans have shifted to other professions because of dwindling demand for the dolls.

“Earlier, there were around 20 families in our village who were involved in making shellac dolls that earned them a descent livelihood. But the advent of cheap plastic dolls resulted in their dwindling demand,” he said while coating in red, a shellac doll of Lord Ganesha, the Hindu deity. “The artisans were left with no alternative but to switch to other professions.”

The artisan hit the headlines two years ago when a local political leader gifted a Ganesha doll Chanda had made, to Prime Minister Narendra Modi during his visit to Kalaikunda airbase in West Bengal. The prime minister had mentioned, “The Ganesha may be small but is big enough to represent the whole of West Bengal.” The Ganesha has since earned the sobriquet Modi Ganesha.

Local newspapers had prominently carried the news that brought Chanda into spotlight. He began to get orders and managed to revive the art. “The massive gap between demand and supply has been helping me to get orders. The orders are regular as there are no artisans left in Bengal practicing the art,” he told VillageSquare.in.

Making of traditional shellac dolls from clay was once a thriving industry in Purulia, Birbhum, Bankura and Medinipur districts of West Bengal. Fashioned out of lumps of clay with the use of fingers, they are deftly shaped into figures of gods and goddesses, animals, dolls and endless varieties of fruits.

“Shellac doll making started in Bengal because of the rich presence of lac since ancient times. It became an organized industry in 1787, under the stewardship of David Erskine, a young British man.  But it was confined to Illambazar in Birbhum district as the resin was locally available in the forest,” said Ratnaboli Bose, founder secretary of Daricha Foundation, a non-profit working for the revival of folk art in Bengal.

“Until the early 20th century, the shellac dolls were made by Nuris, a class of Hindu artisans in Birbhum,” Bose told VillageSquare.in. “They also made bangles, imitation fruits, ornament boxes and lac-dye locally known as alta.”

“But the shortage of raw material and stiff competition from earthenware dolls of Krishnanagar in Nadia district forced the shellac doll makers to seek alternative livelihoods. While the artisans from Birbhum faded into oblivion, their counterparts in Bankura and Medinipur district took up the art,” he said.

According to Bose, the trend continued for most of the time but began to face similar issues of dwindling demand. “Even Rabindranath Tagore had tried to infuse life into the dying art by holding workshops at Sriniketan in Bolpur off Birbhum district,” said Bose.

Explaining the process of doll making, Chanda said that the mud for making the dolls is collected from termite hills, as it is free of gravel and has an adhesive property. “The mud is soaked for two to three days and then kneaded and cleaned until the texture is smooth. It is then pinched and pressed to form a small doll or toy.”

“The tiny models of two to six inches height are then sun dried before baked in a coal-fired oven,” said Chanda. “The dolls are then painted with long sticks of shellac prepared using the locally procured paint powder.”

“The decorative touches are added to the dolls with thin shellac threads created from the white or yellow shellac sticks. The colors will not fade away for at least three to four decades. It just needs an occasional cleaning with cloth,” said Chanda.

Chanda has managed to cling to the art while other members of his family comprising of 25 people have shifted to making conch shell bangles (sankha in Bengali) despite learning the traditional art. “We made galar putul (shellac dolls) since childhood and tried to carry on with it for some time. But it has no future at all,” said Sandhyarani Chanda (60), Brindaban Chanda’s relative.

“We hardly received any demand from customers. Slowly, it became difficult to run our livelihood,” Sandhyarani Chanda told VillageSquare.in. “We decided to shift to making bangles from conch shells worn by women in Bengal and Odisha.”

The widow further pointed out that conch shell bangles have a huge demand in tourist places like Digha, a sea resort town in Bengal and neighboring state of Odisha where tourists from other states purchase them. “The payment is quick and the demand is high. The income is almost five times that of shellac dolls which hardly have any buyers. We had to bid adieu to the profession with a heavy heart.”

Veteran artisans blame the escalating cost of raw material for the reason behind quitting the profession. “The lac is too costly nowadays and a kilo costs around Rs 1,700 from just Rs 30 around three decades ago,” said Sribas Chandra Chanda (82), an artisan in Paschimsai who quit the art a few years ago due to age-related health complications.

“Even the coal costs around Rs 60 per kg compared to Rs 18 a few years ago. It is very difficult to make profit from making dolls that requires hours of hard labor and concentration,” Sribas Chandra Chanda told VillageSquare.in. “An artisan has to sit under the blazing sun and beside the hot coal for several hours under heat and humidity.”

“A slight mistake causes a blister due to the falling of liquid lac. Several hours of work also lead to back pain and strain in the eyes,” he said. “Even after intense hard work, the craftsmen earn just Rs 20 if the doll is sold at a price of Rs 100. The monetary return is not worth the hard work done.”

Conceding that the work is not financially rewarding, Brindaban Chanda still refuses to tread the same path as the fellow artisans of his village. “Shellac doll making is not just my bread and butter but it is an emotional bond as my parents had taught me the art when I was very small,” he said. “We have seen the good and bad days of life together and have managed to survive.”

“I cannot ever imagine leaving it till I am alive. I feel pain to see the condition of the art which once thrived in Bengal. It’s really sad to admit that it would fade away into oblivion after I take my last breath,” he said while looking at the cloudy sky signaling heavy rains.

Gurvinder Singh is a journalist based in Kolkata. Views are personal. Email: gurvinder_singh93@yahoo.com