District administration permits tribes to collect toll from tourists visiting Kataki waterfall. With the revenue, the toll committee upgrades the village and waterfalls, besides helping the needy 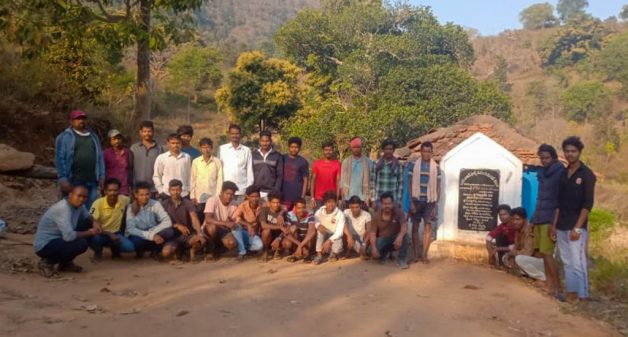 Five years ago, authorities of Visakhapatnam district allowed gram sabhas (an assembly of the villagers) of five villages to set up a toll collection gate at Kataki for vehicles entering Borra panchayat precincts, neighboring Araku Valley.

Located on the Eastern Ghats and bordering Odisha, the Araku Valley is a popular hill station that attracts tourists in droves. The valley is home to 50 feet high Kataki Waterfalls, million-year-old limestone-rich Borra Caves, evergreen Ananthagiri and Dumriguda Waterfalls among others.

The district administration’s decision heralded a victory of sorts for those who have been championing the cause of tribal rights guaranteed by the Indian Constitution but never heeded. This year, the authorities granted permission to the gram sabhas to install another toll gate.

Visakhapatnam district has a tribal population of  498.87 lakh as per the 2011 Census. With 26.31 lakh, the tribes account for 14.42% of the total population. The majority of the tribal population in the district stands below the poverty line and encounter problems like indebtedness, illiteracy, malnutrition and exploitation.

Gram sabhas managing the toll gate belong to the Nooka Dora (also known as Mukha Dora) community, one among the 13 tribal communities inhabiting the district. The population of Nooka Dora tribes number just around 16,000, according to an official at the Integrated Tribal Development Agency. They converse either in Telugu or Adivasi Oriya.

Agriculture being an important activity, the tribes grow several varieties of paddy, millets, cereals, pulses, oilseeds and vegetables. Many migrate to urban centers such as Visakhapatnam, Anakapalle and Tirupati for short durations, in search of menial jobs.

“As there are not many livelihood opportunities in the villages people migrate to take up jobs. In fact, most migrants working in Visakhapatnam are either from Araku Valley or the tribal areas of neighboring states,” said Ravi Rebbapragada, executive director of Samata, a non-governmental organization.

For the tribes, owning the waterfall has not been an easy task. The villagers had set up a toll gate in 2009. The district administration immediately shut it down claiming that only the state-run Integrated Tribal Development Agency (ITDA) had the right to maintain tourist sites.

This occurred despite the Supreme Court verdict in July 1997 – which has come to be known as Samata Judgement, as the petition was filed by Samata. The landmark judgment recognizes the land resource rights of the tribes.

It enumerates that government lands, forest lands and tribal lands in Scheduled Areas cannot be leased out to non-tribes or private industries, including for mining operations as this was in contradiction of the Fifth Schedule of the Constitution.

According to Rebbapragada, the district sub-collector was convinced of tribal rights following several representations that the villagers made. He allowed them to set up the toll gate. But not before villagers argued the case that the waterfall was located in an area notified under Schedule V of the Constitution.

“As the waterfall fell on patta or private land, the gram sabha, in principle, had ownership over natural resources in the area, including the waterfall,” Rebbapragada told VillageSquare.in. He assisted the tribes to obtain their rights.

It was in 2016 that the district authorities finally gave permission to the villagers to set up a toll gate and levy a fee from vehicles entering the valley. The ITDA drafted the proposal and provided assistance in setting up the committee to develop the waterfall.

“We felt that the local body, like the gram panchayats, should benefit from the tourist footfall rather than others,” Venkateshwar Salijamala, project officer, ITDA Paderu, told VillageSquare.in. “We have empowered them for they know what’s good for them and are sensitive to the local ecology too.”

The Borra panchayat has 10 villages. But the 10-member Kataki Waterfall Development Committee (KWDC) which manages and collects toll from vehicles entering the valley represent only five villages, namely Kataki, Dekapuram, Kuntiyasimidi, Borra and Ballupatta with a total population of 500.

“During the tourist season, beginning November and which lasts till May, we receive a good number of vehicles passing the tollgate,” Mohan Nookadora (32) president of the Kataki Waterfall Development Committee (KWDC), told VillageSquare.in.

On a given day three persons, one from each village, are stationed at the toll gate. They begin their day at 10 in the morning and end at 5 pm.

“Each person working at the gate gets Rs 100 per day and the same continues for 10 days till the next person takes over,” said Nookadora, who discontinued his studies after class X. “We have devised this system so that there is transparency and every male inhabitant is assured an opportunity to earn from the toll gate.”

The KWDC consists of 10 members, including a president, a secretary and a treasurer. It serves for a period of five years. Though the toll gate fee is decided by the sub-collector, the committee collects the and decides what to spend it on.

“While the four-wheelers have to pay Rs 40, the motorbikes are charged Rs 10,” Prasad Vanthala (32), secretary of the committee, told VillageSquare.in. “We have submitted a proposal to the district authorities to levy fee per person rather than per vehicle as is the norm in most tourist destinations; we are awaiting the permission.”

The committee uses the earnings from the tollgate for activities such as repair of roads, maintenance of public toilets, village development works, and at times help residents pay their medical and educational bills.

In fact, the toll gate collection has ushered in a steady source of revenue and helped achieve financial autonomy among the five gram sabhas. In 2018-19, the toll gate generated a revenue of Rs 2.3 lakh. The committee spent Rs 38,000 on installing railings and steps leading to the waterfall.

“We spent another Rs 8,000 on constructing a public toilet. We spend for its maintenance too,” said Vanthala. “We paid for medical emergencies of four families besides taking care of the educational fees of a couple of students.”

In 2019, when Korra Ramarao’s son fell and broke his leg, the committee took care of his medical bills. Similarly, when Gemmela Chimmaya’s pregnant wife had to be rushed to a hospital, it was the committee that paid for the ambulance.

In 2019-20 the toll gate collection witnessed a major drop with just Rs 2 lakh in the kitty due to the lockdown. Rather than wait for relief material from the district administration during the lockdown months, the committee took the initiative and used its funds to distribute free vegetables and cooking oil to all the residents of constituent villages.

“We have received permission to erect an additional toll gate towards Sunkarametta side which means more funds for development activities,” Korra Mohan (30), a committee member, told VillageSquare.in.

Hiren Kumar Bose is a journalist based in Thane, Maharashtra. He doubles up as a weekend farmer. Views are personal. Email: hirenbose@gmail.com