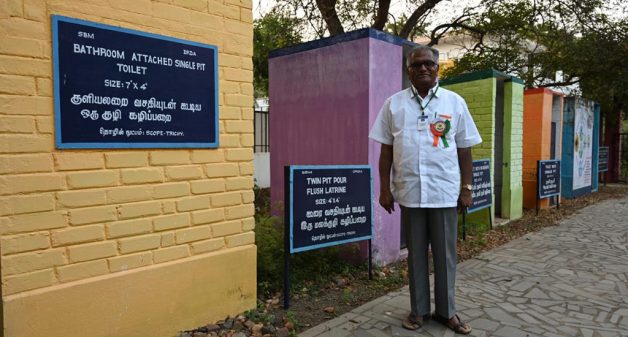 Subburaman, has been chosen for the Padma Shri Award for his sustained dedication towards total sanitation (Photo courtesy M. Subburaman)

The government primary school in Pagalavadi village in Thuraiyur administrative block of Tiruchirappalli – commonly referred to as Trichy – district boasts of SATO pan toilets. A product of LIXIL, the name SATO is derived from safe toilets.

The toilets need just 500ml of water because of a simple mechanical-cum-water seal in the pan. The water seal makes the toilet odour-free, thus making it hygienic. There are scores of schools in Tamil Nadu, especially in Trichy and nearby districts such as Perambalur and Krishnagiri.

As per UN statistics, 4.2 billion people worldwide lack safe sanitation services. The data also reveal that 673 million people still practice open defecation. While data pertaining to India shows good progress in terms of number of toilets built, the ground reality is different. Many of the toilets remain unused, especially in rural area, lack of water being one of the reasons.

However, Musiri administrative block in Trichy received the Tamil Nadu government’s award for total sanitation much before India’s campaign towards making all our villages and towns open defecation free (ODF). Musiri owes its recognition to M. Subburaman.

Subburaman is the founder director of Society for Community Organization and People’s Education (SCOPE), a development organization based at Trichy. SCOPE’s work in the water, sanitation and hygiene (WASH) sector, has earned Subburaman a Padma Shri, one of the highest civilian awards in the country.

Subburaman started SCOPE in 1986. Initially the focus of SCOPE was rural development, especially helping villagers enhance their livelihood. As part of improving the living conditions and better sanitation, the non-governmental organization (NGO) constructed toilets too.

“Despite earning more because of various interventions, there was no perceptible change in the villagers living conditions,” recollected Subburaman. “They were spending more on healthcare.” It was then that he started focusing more on improving sanitation.

As the villages where SCOPE was working then are close to the banks of River Cauvery, the groundwater table is high. As this might lead to groundwater contamination, Subburaman ruled out construction of flush toilets, and sought alternate solutions.

It was during his search, Santha Sheela Nair, a civil servant (now retired) who has played key roles in initiating rainwater harvesting in Tamil Nadu and improving rural water supply among other WASH initiatives, arranged for a workshop.

“Paul Calvert of Belgium, who has been promoting ecological sanitation, conducted the training program,” Subburaman told VillageSquare.in. “I voiced my concerns of constructing toilets in areas with high water table and rocky areas.”

When Subburaman and his team visited villages for sanitation campaigns, the villagers were not receptive. “The villagers would ask how they could construct toilets when they did not have proper drinking water,” recollected Subburaman. Calvert spoke in detail about the ecological sanitation toilets, commonly referred to as eco-san toilets, as the perfect solution.

Eco-san toilets have pans raised above ground level with two chambers below. After use, no water is used, but ash or saw dust is sprinkled, enabling an easier composting process. The wash water is diverted separately to plants, after filtering through a bed of sand and canna plants.

SCOPE constructed its first eco-san toilet in Kaliayapalayam village in Musiri block in the year 2000. Mangalam, in whose house it was built, recalled how she and her family members no longer had to wake up at the crack of dawn to relieve themselves.

Santha Sheela Nair was present when the first chamber was opened. “There was no smell. It just smelled like soil,” Mangalam recalled. Referring to Nair, she said, “Madam did not hesitate to touch it with her hand to show it was perfect compost.”

Mangalam continues to use the compost in her garden and avers that her banana plants grow larger because of it. Following Mangalam most of the villagers constructed eco-san toilets, as they are odor-free, cost-effective and use minimal water. Just like for Mangalam, it was a big relief for the other women, as now they no longer had privacy concerns and they could use the toilet whenever they needed to.

For the benefit of those who cannot afford independent toilets, Subburaman came up with the idea of community eco-san toilets in Musiri in 2005. It has two wings, one each for men and women. A separate unit has been designed with ramp and handrails for the elderly and the physically challenged.

The community eco-san is known for paying users initially for a few years, to inculcate the habit of using toilets among villagers. It continues to be used. The dried compost from the chambers is distributed to the farming community in the vicinity.

“When the thought of toilets did not even cross villagers’ minds, Subburaman, not only spoke to villagers frankly without inhibitions, he convinced of the need to use toilets,” said K. Govindaraju, founder-director of Society for Education, Village Action Improvement, (SEVAI), a Trichy-based NGO.

“Subburaman created an eagerness among villagers to build a toilet and use them, which is important. He could convince them,” Govindaraju told VillageSquare.in. “Having traversed with him and parallelly, I can say that he made sanitation campaign a movement and succeeded. He continues to research and adopts innovative models as per the local needs.”

One of the important works of SCOPE is the total sanitation of Thimmapuram village in Krishnagiri district. “The water level is at 1’ below ground. So we built eco-san toilets in the school,” G. Kasimani, district coordinator of the Swacch Bharat Mission.

“During meetings with officials and parents, the students were able to convince the parents,” Kasimani told VillageSquare.in. “Knowing Mr Subburaman’s expertise we sought his help and installed eco-san toilets in more than 250 houses. Jasmine farmers in the locality use the compost from chambers as manure.”

Subburaman always tries to implement methods that lead to better hygiene, besides his works in water resource management such as construction of rainwater harvesting structures, check dams, etc. Much before the pandemic made it necessary, he installed foot-operated hand washing systems in schools.

Various agencies such as UNICEF, WASTE of Netherlands and Ladies Circle 33 of Trichy have all supported his initiatives. The Ladies Circle helped in installing pedal-operated wash basins in Bhima Nagar and Pandamangalam village of Trichy district.

The Sustainable Development Goal 6 is about ensuring access to water and sanitation for all. SCOPE has been working towards it for many years, with much success. Be it eco-san toilet, urine diversion flush toilet, zero waste toilet and biogas, or SATO pan toilet, Subburaman ensures that the toilet is as per the requirement of the user and the water availability.

Govindaraju finds his method of joining hands with the government in ensuring better sanitation is a plus point. “For someone with a chemistry background, his grassroots level work and dedication is admirable. He absolutely deserves the Padma Shri Award,” he said.