With the men away, women farmers had no money to buy chemical inputs during the lockdown and shifted to organic farming. They are already reaping the benefits 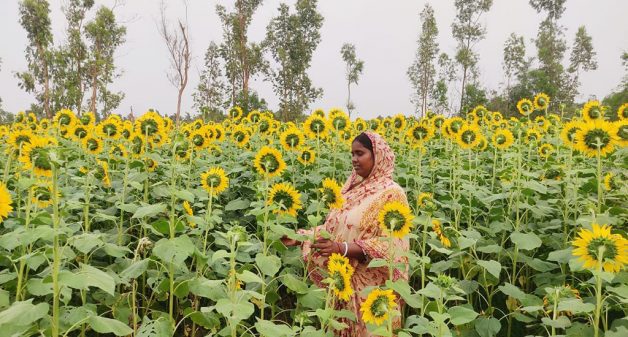 Pratima Pradhan is happy nowadays. She not only contributes to her family’s income but her five-year-old son who suffered from frequent bouts of acidity till a few months ago is also healthy. The 33-year-old farmer resides at Dakshin Gopalnagar village in Sundarbans area of South 24 Parganas district of West Bengal.

She thanks organic farming for changing her life and keeping her family healthy. “The traditional method of farming has given a new lease of life to me. It has not only increased my income but has also helped to keep my family healthy,” she said. “My son doesn’t suffer from acidity anymore as he did while consuming vegetables from the market. The lockdown came as a boon for me as it changed my life for good.”

The pandemic-induced lockdown has proved to be a blessing for 1,160 women residing in 11 villages spread across three panchayats – Durbachoti, Gopalnagar, Rishibomkin – of the Sundarbans, known for its vast mangrove cover and Royal Bengal tiger.

A majority of the women in Sundarbans are involved in farming as men migrate to other states for livelihood. The archipelago faces severe natural calamities often, forcing men to venture outside, which leaves the women with the responsibility of farming and running their household.

“My husband works in a private firm at Siliguri. I was alone and also had to look after my parents. I was growing paddy and other crops with chemical fertilizers and pesticides,” Manjushree Das (48) of Dakshin Gopalnagar told VillageSquare.in. “A woman farmer told me about organic farming. Initially, I was reluctant, but later decided to give it a try.”

“Surprisingly, the production has increased; and the profit too. Traditional farming has saved my expenditure on chemical fertilizers that also prove bad for health. The decision to switch to organic farming has been helpful as it is offering better food to my family,” she said.  There are many women who feel the same about switching to organic farming.

The credit for motivating the women into organic method of agriculture goes to Sudhanshu Shekhar Dey (54), a local homeopathy doctor in Durbachoti, who has been inspiring farmers since 2012, to take up organic cultivation.

Dey claimed that he was on a mission to offer healthy food on every plate. “It was difficult to convince these women to adopt traditional farming practices, as they had been using chemicals for many years,” Dey told VillageSquare.in. “Working since 2012, we could just manage to bring around 400 women into our fold.”

Dey who also runs Society for Durbachoti Social Action and Transformation, a non-profit organization, said that he managed to convince nearly 800 women into organic farming in a span of just few months after the announcement of lockdown last year.

“The women didn’t have enough money to buy fertilizers as there was severe cash crunch during the lockdown. We convinced them to attend our training programs on organic farming and invited them in small groups of 10 keeping in mind the social distancing protocols,” he said. “We faced reluctance initially but they came after being cajoled by those who were already into organic farming.”

Society for Socio Economic and Ecological Development (SEED), a non-profit working for the livelihood of coastal communities affected by climate change, played a major role by providing financial and technical support to the homeopath to carry on his work.

“We joined the initiative during the lockdown, realizing the economic hardships these women were facing while their men were stuck in other states. We found that the women were too poor to buy fertilizers and so we provided climate resilient indigenous varieties of seeds as there had already been severe damage because of Cyclone Amphan,” said Ratna Mazumdar, general secretary of SEED.

“We offered seeds to 69 agriculture groups, each having 18 to 20 women,” Mazumdar told VillageSquare.in. “We gave priority to those who had been affected when shoddy embankments collapsed during the cyclone as well as by the lockdown.”

Saleya Bibi (37), a resident of Durbachoti village, has been practicing organic farming for the past nine years.  Having become a trainer now, she said that she and other trainers visited villages and constantly monitored the farms to ensure good productivity.

“We asked the women about the issues they faced. We trained them in making natural fertilizers that helped them increase their income as it saved their expenditure on buying fertilizers from the market,” Bibi told VillageSquare.in.

“The women saved roughly Rs 3,000 per bigha which they earlier used to spend on buying fertilizers,” she said “With increased savings, women began to bring more land into farming. They didn’t have the headache of buying fertilizers as everything was available in the house.”

“Consumers wait keenly for us and the entire produce gets sold within a few hours. The number of women selling the farm produce in the market has increased post-lockdown as more women have changed to organic farming,” pointed out Ashtami Karak (34), a farmer in Dakshin Gopalnagar, to VillageSquare.in.

The traditional farming has not only improved their livelihood but has helped them consume healthy food. “We have stopped buying vegetables from the market as it doesn’t suit our taste anymore. We grow organic food and also sell the same to our consumers. We do not want them to consume poison,” said Madhabi Jana (33), of Durbachoti village.

The traditional farming has also led to a revival of certain species which had almost disappeared. “We can now spot house sparrows, snakes, insects and other species which were not visible due to increasing use of pesticides in the fields. Our shift to organic farming has also helped us to save biodiversity,” Jana told VillageSquare.in.

Gurvinder Singh is a journalist based in Kolkata. Views are personal. Email: gurvinder_singh93@yahoo.com