A traditional farmer, after undergoing training under agricultural scientists, has been conserving various landraces and sharing his knowledge, besides establishing a community seed bank 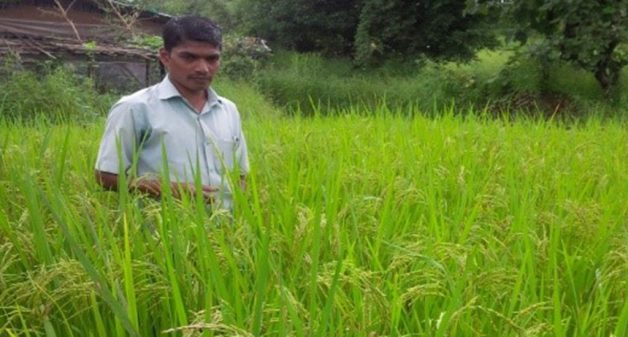 Mavanji Ganpat Pawar (38) of Chowk village, in Jawhar taluk of Palghar district, is doing exceptional work conserving crop diversity. His efforts are seen as an inspiration to young farmers engaged in sustainable agriculture and agro-biodiversity conservation.

A high school dropout, Pawar discontinued his studies due to the poor economic condition of his family. He worked as an operator in a chemical factory at Silvassa for two years. However, due to ill health, he could not continue and was back in his village. At home, he started helping his father in cultivating their 3-acre rain-fed land.

In June 2004, Pawar took part in the Agri-Horti Forestry Program (Wadi) launched by BAIF Development Research Foundation (BAIF). He participated in the program since he was concerned about declining soil fertility, increasing pest attacks and diseases on the vegetation. The production cost had been increasing due to costly fertilizers and insecticides.

With his keen observation, he realized the importance of crop genetic diversity in today’s climate change scenario for sustainable agriculture. Pawar then focused on the conservation of seeds of local landraces with BAIF from April 2008.

Pawar adopted the System of Rice Intensification (SRI) method of rice cultivation and rice nursery through raised bed method. Pawar has developed three rice varieties, namely Sadhana, Kirti and Kamal, through the selection method and has applied for registration under the PPV & FR Act with BAIF’s support.

An in-situ germplasm conservation center has been established in his field. He has played an active role in the Purification and Characterization of Paddy landraces with BAIF scientists and has been working with the organization for the last 11 years.

He has expertise in participatory seed and the varietal selection and has conserved 28 landraces of rice, in addition to finger millet (2), Little millet (1), sorghum (1), hyacinth bean (10), pigeon pea (1), black gram (2), niger and tubers (04).

In the hilly areas, he has conserved indigenous tree species supplying timber and fruits, turning the area into a biodiversity center. He has expertise in mango and mahua grafting and seed selection in rice and millet crops. He now earns more than Rs 95,000 per year through the sale of mango, cashew and seeds of rice, little and finger millet.

His family is cultivating Karande, Kochi and Suran tubers, vegetables such as bottle gourd, bitter gourd, brinjal and pumpkin, in addition to leafy vegetables amaranthus and alu, lablab bean, little gourd, rosella, etc. for their self-consumption and they are using all of this throughout the year.

Pawar devoted his land to establishing a community seed bank. He is a member of Biyane Samvardhan Samiti (Seed Savers’ Group) of Chowk village.

About 19 quintals of quality seed of rice, millets, and beans have been produced in the last three years and sold through the community seed bank.

Pawar has initiated seed production of Kolapi, Surti Kolam, and Kamal varieties of rice landraces, Kalperi finger millet, and Ghosi little millet and is supplying the seeds to the community seed bank.

Pawar is working as a resource person for production techniques of organic inputs, participatory seed selection for rice and millets and the SRI rice cultivation method. More than 2,000 farmers have been trained about the techniques.

Additionally, he actively provides facilitation support in the training, demonstrations and field visits organized by BAIF. Hundreds of students from tribal schools have visited and learned SRI paddy cultivation from Pawar.

Pawar has shared his experiences in conservation and revival of crop diversity at different conferences and workshops organized in Maharashtra, Gujarat and Madhya Pradesh.

Pawar’s father and mother play a very important role in the Seed Conservation Program. His work has been noted and selected and published in Krishi sutra – Profiles of Agricultural Innovations in India, a compilation of 100 innovative farmers of India, published by Ministry of Agriculture and Food Processing Industries.