Villagers have rebuilt their life after Cyclone Fani, by building transitional shelters with local material. Building by themselves has given them dignity, besides a safe space 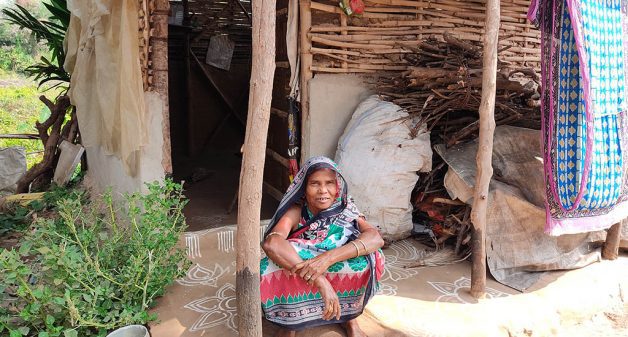 Subhashi Naik (64), hails from Silutota Malisahi hamlet in Puri Sadar administrative block of Odisha’s coastal district Puri. She does not want to remember that fateful day that shattered their life, livelihood and most importantly the roof over their heads.

On 3 May, 2019, Cyclone Fani, a severe cyclonic storm that struck Odisha coast, ravaged the life and livelihood of people in the coastal belt of Odisha, severely affecting people in Puri in particular. “We had never seen such extreme and horrifying cyclone in the last 20 years,” said Naik.

“The next day when I returned from the cyclone shelter, I couldn’t believe that our mud-walled thatched roof home was completely damaged,” Naik told VillageSquare.in. “Later, we spread a polythene sheet over our broken house to save my family from heat and rain.”

Subhashi Nayak, who lost her husband years ago, raised her children alone and had spent all her savings building that house. “When the house was completely damaged by the cyclone, we were forced to sleep under the open sky for a few days till we received tarpaulin sheet from the village chief to protect ourselves,” she said.

“Our lives were saved as we had shifted to the cyclone shelter; when we returned, all the mud-walled thatched roof houses were completely damaged,” Ranju Dei, a 30-year-old woman from Bhoi Sahi, told VillageSquare.in. “We were only thinking how to re-start our lives.”

“The village chief provided tarpaulin sheets to each family and we spread the tarpaulin over the damaged house just to keep our family protected,” said Dei. Though local administration had assured financial assistance to rebuild pucca houses, many beneficiaries, including the families in Silutota Malisahi and Bhoi Sahi hamlets, have been left out.

Shelters for the needy

SEEDS, a non-profit organization that helps communities rebuild climate resilient transitional shelters in disaster affected areas, worked with the local communities in Puri Sadar administrative block of Puri district for this project too.

The objective was to strengthen local communities in their rebuilding efforts after Cyclone Fani. “We selected the most affected and vulnerable people from marginalized communities and gave priority to single women and women-headed families,” Manu Gupta, co-founder of SEEDS told VillageSquare.in.

“The selected persons were given training by our technical person and they built the houses by themselves, using locally available materials,” said Gupta. The community built the transitional shelters and are now living there. It is also a technique they learnt and can use in future if necessary. The community in Puri Sadar built 129 transitional shelters after Cyclone Fani.

Manoj Bhoi (32), of Bhoi Sahi hamlet in Bira Balabhadrapur village, said, “We were given training on building climate resilient transitional shelters by using locally available materials, to make it both safe and sustainable.”

Nine members – one from each family – were selected to participate in the training. And they helped one another in rebuilding their houses. It took a month to finish all the houses. “We used cross-bracing technique and put mud over it to make the house stronger and cooler,” Bhoi, a house painter, told VillageSquare.in.

Jhilli Dei (27), who got trained and then joined in rebuilding the houses said, “Generally, the male members of a family take the decision and they build the house. Here, the priority was given to women, to learn the technique and build the shelter, which gives us an increased sense of ownership.”

Chandramani Naik (72), a Dalit woman of Silutota Malisahi hamlet said that they were living under the tarpaulin even three months after Cyclone Fani struck. “The two tarpaulin sheets were not enough for our 10-member family,” she said. Her grandchildren were sleeping under the open sky and it was extremely difficult during the monsoon.

“It was also unsafe for my daughters-in-law as all the male members of the family go out for labor work during the day,” said Chandramani Naik. She has built three separate houses for the entire family. “I have built this house on my own land and have some space to start goatery and earn to support my family,” she said.

Chandramani Naik feels that the transitional shelter is a safe space for her family till the administration provides them financial assistance to build pucca house under government schemes. Like her, Subhashi Naik is happy that her daughter and granddaughter each has a house to live independently.

When SEEDS imparted training, being a construction worker, she took part and built a separate house for herself. “I had a land in my name where I allowed my daughter to build a house, she not only learnt the technique, she built her own house which gave her both confidence and dignity,” said Subhashi Naik.

The 16 families of Ghosarapada village under the same Puri Sadar administrative block said that they knew they had a land but did not have a proper demarcation. For that reason they were deprived of their basic rights – connecting road, electricity, tube-well facilities, etc.

“Land right has given us a sense of identity and dignity and also added to our income,” said Kushum Behera of Ghosarapada. Besides providing a safe and dignified living space for the most vulnerable people after the disaster, the next step was providing green energy to enhance their living.

After the severe cyclonic storm Fani damaged most parts of coastal district Puri. With uprooted and damaged electric poles, people, especially in rural areas, were forced to live in the dark for months. Rabi Bhoi (68), of Bira Balabhadrapur village said, “During that time, people in rural areas were afraid of going out after 6 pm and it was completely unsafe for women and adolescent girls.”

“The communication network was completely disrupted; and to recharge the mobile phones the men had to travel long distances and were spending up to Rs 50 on travel just to find mobile recharge points,” Rabi Bhoi told VillageSquare.in.

With the construction of transitional shelters, the villagers were provided with solar units which supported two lights, one fan and mobile charging facility in each house. Before the cyclone, villagers who come under BPL category had erratic power supply from the grid.

Selco Foundation, a non-profit organization that promotes sustainable living, lent a hand and provided solar power. Now these villagers have transitional shelters with solar light facilities for them. “It solved the long-standing electricity problems of our community,” said Rabi Bhoi while putting solar panels on the backyard of his house.

“A solar home system is always a better solution than depending on grid-power during disaster. It not only solves their electricity requirement but also increases their productivity for other livelihood activities,” said Manu Gupta.

The families who depended on kerosene lamps most of the time are happy with the new renewable energy facility. “Solar lights have made our life easier and safer and reduced our dependency on kerosene,” said Parbati Naik, while dusting her solar panels. “Now the families get more time to spend together and children are able to read in the evenings.”