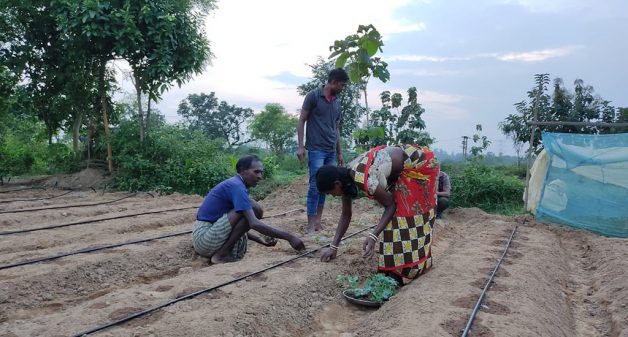 “Look at them; every time, I switch on the water sprinkler, these kids appear from nowhere,” said Anjali Hembram, pointing at the children playing in her orchard. She loped after them, chiding them off the orchard.

Her husband Ajit Hembram said, “How things change, some 10 years back, we couldn’t afford to have two square meals a day from this land. It was all parched, we just did paddy in Kharif,” he said. “But now this land remains green throughout the year.” Now he grows paddy, cauliflower, brinjal, cowpea, gram and whatnot.

“Last year we got this drip and sprinkler with subsidy from Pradhan Mantri Krishi Sinchai Yojana (PMKSY) and this has made irrigating the crops much easier.” This recognition coming from Ajit Hembram is a big transformation, considering his vehement opposition to suggested practices, when he participated in agriculture training programs.

Anjali and Ajit Hembram are Santhal tribes from Hatinada village in Baghmundi administrative block of Purulia district in West Bengal. The Baghmundi block falls under the Jangal Mahal region which is one of the socio-economically backward regions of West Bengal.

The region has high tribal population, Santhal being the dominant tribe. The region remains water deficit despite receiving high rainfall of 800-1,300mm due to its plateau structure and the absence of perennial streams.

Professional Assistance for Development Action (PRADAN), a development organization, has been working in the region for more than 10 years. Collectivizing women into self-help groups (SHGs) was the first step in bringing about change.

Though women are involved in all the farming activities, they do not have a say in any livelihood-related decisions. This leads to economic dependency on men. To a question on who a farmer is, the women overlooking their efforts said, “One who ploughs and owns the land.”  Since women do not plough or own the land, they are not considered farmers as per this definition.

So we focused on three aspects to ensure women’s say while promoting livelihood – to help the women recognize themselves as farmers; develop their skills and technical know-how around agriculture practices to ensure more productivity and crop diversity for home consumption and market; and introduce farm implements to reduce drudgery.

We identified women community resource persons (CRPs) and provided training and handholding support on crop management, soil management, use of farm implements and modern farming practices such as use of trellis, nursery, poly house, etc.

Initially the men resisted when women shared their views. They made sarcastic remarks to women CRPs. But there were a few who agreed to the women CRPs’ suggestions and tried to implement them in small areas.

When they saw the difference, slowly the entire village started following the practices. The shift in the agricultural practices by the community led to increased production for household consumption and increased income from marketable cash crops.

While there is a consistent increase in the crop production and involvement of women farmers in decision making, there still remains the challenge of reaping the benefits. Usually men purchase the inputs and sell the produce in the local wholesale mandi.

This has two implications; women’s participation remains limited to field engagement and have no control over the income of the produce. And farmers have limited negotiating power once they take their produce to the local mandi.

An interesting discussion happened in Dhanudih village of Matha gram panchayat. The village is 17 km from Balrampur mandi, a local market in Purulia. The farmers said that when they go to the mandi, the trader segregates the vegetables (tomatoes in this case) into three grades.

They get the market equivalent rate for grade 1, and half the rate for grade 2. Grade 3 vegetables are either rejected or procured at a marginal rate. The same tomatoes are then mixed together and taken to bigger mandis like those in Dhanbad, Tatanagar or Kolkata.

For the farmers only one mandi is available and there is no scope of negotiation. While doing a market survey, we found that the produce purchased from the farmers at a cheaper rate was sold with a profit of Rs 5 to 8 / kg by the trader.

There was a felt need for the farmers to be collectivized and exposed to market-oriented farming.  In July 2020, with the support of Walmart Foundation’s Livelihoods Enhancement through market Access and women emPowerment (LEAP) project, we identified Matha and Ayodhya Hills panchayats, and collectivized farmers into farmer producer organizations (FPOs).

There are strong women collectives and the SHGS have significant capital to lend each member a loan of up to Rs 15,000. The collectives are linked with the Anandhara project (West Bengal State Rural Livelihood Mission)

Almost 90% of SHGs have received a revolving fund of Rs 15,000 and Community Investment Fund from the Anandadhara project to the tune of Rs 50,000 per SHG. These SHG in Ayodhya Hills and Matha have bank accounts with a cash credit limit of Rs 150,000.

After identifying the villages, the farmers were oriented towards collective farming and synchronized agriculture. Focused group discussions were conducted in each village on selecting winner crops (most suitable crops for the area based on topography and market), common nursery, producing quality produce, sorting and grading, storage and marketing of produce, etc.

Since women already have experience of working together in SHGs, and have seen the merits of collectives, they readily agreed to be part of the producer groups. Over a period of six months 600 women farmers from 37 villages went through the orientation around FPO and market oriented collective farming.

They have further mobilized 2,100 women farmers and formed 15 producer groups. The producer groups have decided to start market-oriented farming in one-third of their land and continue food crops and seasonal vegetables in the rest.

“Our producer group members sold the tomatoes (a winner crop for the area) at the door step at Rs 10.5 per kg while those who were not part of it sold their produce at Rs 7-8per Kg,” said Saraswati of Hatinada village of Ayodhya Hills panchayat.

Each producer group is supported by an agriculture entrepreneur who is a local youth and provides information related to the market, keeps track of market rates in different mandis, helps in price negotiation and provides other agriculture services to the members.

“We raised 120,000 tomato seedlings in poly house this year. 40 farmers transplanted the quality seedlings in 13.3 acres of land. This has ensured the quality of the produce. Since farmers were taking turns to work, considerable time was saved,” said farmer Parbati Murmu.

The poly-house is used for cultivating other crops as well. “When the vendor handed me Rs 15,750 for my tomato crop, I was so happy. This is the first time I got the income directly in my hand. I am a farmer now,” said the teary-eyed Parbati Murmu.

It is just six months that the women farmers have come together as producer groups and change is already obvious. While there’s a long way to go, the women farmers in Baghmundi are gradually holding their ground together in their journey to become entrepreneurial farmers.

Alopi Chaturvedi and Suman Gayen are associated with PRADAN. Views are personal.