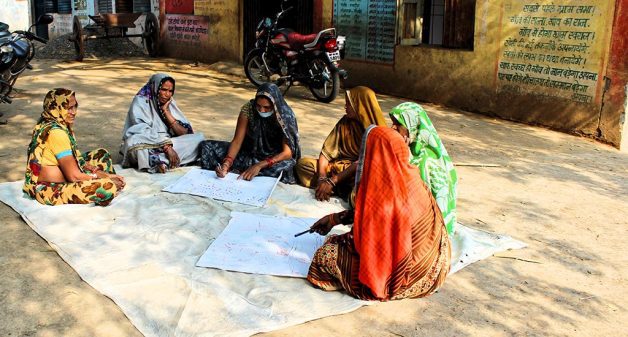 In Rajpur administrative block, Madhya Pradesh, women from villages have begun to drive social change. One such woman, Lalita Khanna from the Jwalamata Samuh, a self-help group of Lakshmi Sangathan (organization), spoke about this change, and how it has helped her and others in the village to sustain themselves in the face of difficult times.

Across villages in the state, there are numerous self-help groups (SHGs) comprising of a small number of women members, generally between seven and 15. A couple of hundred women from approximately 20 to 35 different SHGs make up a larger organization known as a sangathan.

With support from the Transforming Rural India Foundation (TRIF), through capacity building exercises, information awareness workshops and meetings, sangathans in Rajpur have enabled several women to become leaders in their communities and drive change beyond their villages.

Most of the women walked covering their face and did not speak to outsiders visiting the village. But things began to change with the formation of SHGs as women gained access to resources and mobilized funds for the functioning of the groups.

However, for most women like Lalita Khanna, there was limited support from their families to attend SHG meetings. Recalling the initial phase, Khanna says, “My husband would get angry and tell me to focus on household work, the farm and our children. He said that the meetings were useless and not beneficial as they did not contribute to the family income.”

Moreover, villagers faced challenges in gaining access to public health facilities, and were generally unaware of the governance structures of their villages. With the advent of SHGs, women began to mobilize and were given information on themes across sectors such as nutrition, childcare, health, governance and more.

Prior to the formation of SHGs, for loans the villagers relied heavily on rich businessmen, who levied huge interests. The burden of such loans often resulted in the loss of assets kept as collaterals for the loans.

For Lalita Khanna, the turning point came when her husband met with an accident, and required immediate medical help, which she could not afford. To her family’s surprise, Khanna’s SHG granted her a loan of Rs 80,000.

The loan from the SHG was not only interest-free, but it saved her family from being forced to sell their jewelry and agricultural land. “Now my family members don’t stop me from going to the meetings,” she says with a smile on her face.

As women keep attending SHG meetings and participate in the activities organized by their sangathans, they have become more resilient and courageous. Many of them have stopped covering their face with a veil and have started participating in the gram panchayat meetings to voice their concerns.

Khanna has become much more confident and understands her rights better. “Since I started attending these meetings, I have the courage to speak in front of anyone,”she says with a tinge of pride in her eyes. She credits this change to the SHG women and support of her sangathan and to all that she has learnt from the workshops held by TRIF.

This change is not limited to Khanna. Others in the village, being inspired by their fellow women, have joined SHGs and are keen to become aware of their surroundings. The sangathans are gaining traction and are increasing awareness about their work while encouraging more women to join hands. As a result, the women in meetings have grown in number, and their work and influence in the villages have expanded.

“Learning about old age pension schemes, Ayushman Bharat Yojana and many more social protection schemes have benefited the people of our villages.  A few weeks back, we also made our village development plans and presented our demands to the government,” says an SHG member.

Some women’s collectives have started their own businesses that range from agriculture to tailoring and making sanitary napkins. More importantly, as these groups lead to transformation in the lives of these women, the behavior of people has changed and development is being driven at the community level.

This behavior change has contributed to a sustainable impact in the village – the SHGs have helped women to retain their jobs, even during the COVID-19 pandemic, and have given them a greater say in the financial decisions of their homes.

For instance, while many men lost their jobs and household incomes diminished, women from SHGs were able to create livelihood using the SHG funds to make masks and PPE kits, and sell them, leading to new streams of income for their families.

Sangathans have also provided women with a huge bargaining power over authorities, and have empowered them to raise their voice for the needs of their villages. A popular slogan, thus, is completely justified in this regard “There is power in organization”.

To Khanna and others, such changes have also provided an aspirational value – that change is not just something to be talked about, but it is worthwhile to work for it as well. They not only participate in the panchayat discussions, but also go up to the district administration with their problems and demands for solutions.

TRIF supports sangathans by increasing awareness on government processes. In addition to that, TRIF has also increased awareness on education and health in collaboration with partner NGOs through initiatives like Mohalla Classes and Poshan Vatika that aid children’s education and educate women about nutrition and giving their family a balanced diet.

While they have a long way ahead of them, women in the sangathans are inspiring others to join hands with them. These women have set an example for many others, and it is with great certainty that they have paved a path for change that will continue long after the external support of NGOs has been withdrawn from the villages.