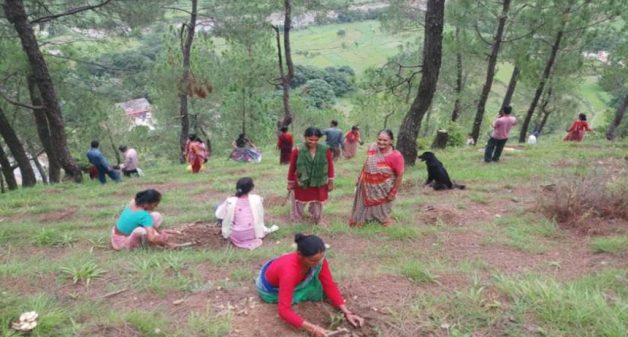 “The forests are very useful for the people living in the mountains. These forests cater to their basic needs such as clean water, pure air, cooking fuel, farming, fodder, etc. Wherever forests meet the basic needs of the people, the forests are healthy,” says Mallika Virdi.

Virdi is the sarpanch of the van panchayat of Sarmoli village in Uttarakhand’s Pithoragarh district. Her van panchayat is counted among the finest in the mountain state. Van panchayat refers to a locally-elected institution that plans and organizes activities to manage community forests in a sustainable manner.

In Virdi’s village, for instance, the community members clear bushes, remove weeds and prune dry branches to “get good-quality grass”. “If we leave the forest [unattended], then the shrubs will grow as tall as trees. The management of forests is, therefore, necessary,” she explains.

The van panchayats of Uttarakhand are known for managing community forests efficiently. Each van panchayat makes its own rules to use, manage and protect the local forest. These rules range from selecting forest guards to penalizing defaulters. In Virdi’s village of Sarmoli, the penalty fee can go from Rs 50 to Rs 1,000.

“Van panchayats do all the work related to environmental protection such as the revival of water sources, water conservation, protection of forests from fires, and plantation,” says Puran Singh Rawal, who is the sarpanch of Adauli van panchayat in Bageshwar district.

Rawal gives an insight into how his people fight forest fires. One, they routinely collect the fallen leaves and dried bushes and keep them aside. This is to ensure that the fire doesn’t spread from the ground up. Two, they have identified the water sources they can rush to, in case there’s a fire.

Van panchayats mostly operate independently of each other, but instances of collaboration are not uncommon. Take the case of Sarmoli. Since the villagers don’t get enough grass from their own forest during winter, they visit the forest in the adjacent village of Shankhadhura for their needs. On certain terms and conditions though.

These van panchayats also ensure that the forest resources aren’t overused. All movement of villagers and their cattle in the monsoon — from June to September — is stopped. During this period, people arrange grass and fodder for their cattle from within the village itself.  Some villagers are also deployed to patrol the forest and to catch intruders.

Virdi explains why this is done, “[As a result of the ban on forest use] a good amount of grass grows in the forests by October and November. The van panchayat then distributes the grass to the villagers as per their requirement. This grass is used as fodder all through the winter season.”

The van panchayats won their right to manage traditionally-held forests after a sustained campaign against colonial rule. Tarun Joshi, president of the Van Panchayat Sangharsh Morcha, says that the British had declared these forests as the property of the state and banned the movement of people into the forest.

The people of Uttarakhand (then a part of the United Provinces) opposed the move. The British authorities were forced to form the Forest Grievances Committee to address their concerns. It was on the advice of this committee that the institution of van panchayat was created under Section 28 (2) of the Indian Forest Act, in 1927.

The working of van panchayats was disrupted in the year 1997 when the Indian government introduced the concept of Joint Forest Management (JFM). This model required the forest departments and local communities to work together to manage and protect forests.

As a result, the JFM system was discontinued from the state in 2003 and the van panchayat rules were reinstated, informs Joshi. However, the van panchayats are still not completely free of either the forest department or the revenue department.

The revenue department is responsible for conducting elections for a van panchayat every five years. They also step in to resolve disputes related to encroachments.

“We are working to increase the livelihood sources of these van panchayats through projects such as JICA. So far, 700 van panchayats are executing projects under JICA,” says Neena Grewal, who is the chief conservator of forests under the forest panchayat and community forestry department.

A budget of Rs 5,000 to Rs 10,000 is issued to the van panchayats for a period of three to four months, informs Rawal. According to the Forest Department Rules 2012, the department is supposed to draft a ‘micro-plan’ for the van panchayats every five years and sanction the budget for the same. However, a majority of the van panchayats haven’t yet received the funds to execute these projects, which they wanted to take up to supplement their income.

The van panchayats’ own sources of income stem from the money they make by auctioning the pine, grass or rhododendron gathered from the forests, or from the sale of juices, jams, pickles and other processed products made by self-help groups.

However, they have to seek permission from the forest department to use this income, even if it is for smaller interventions such as making a pond. Such interference remains a sore point in the otherwise efficient model of the van panchayat in Uttarakhand, say these leaders.

Varsha Singh is an Independent journalist from Dehradun. Views are personal.

This was originally published in 101Reporters