A Pawara tribe farmer, who transformed his unproductive land and started conservation of landraces, serves as a resource person at field trainings despite lacking formal education 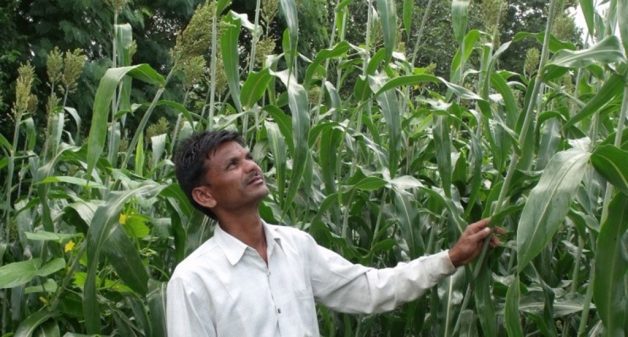 Having gainfully converted his unproductive land, Mochada Pawara runs a center for experiential learning, to share his insights about farming (Photo courtesy BAIF)

Mochada Pawara is popularly known as Mochada dada (brother) and Mochada bhamta. He belongs to the Pawara community, and is a resident of Harankhuri village, near Dhadgaon in Maharashtra. The village is located amidst the Satpuda hill ranges of Nandurbar district on the Maharashtra-Gujarat border.

Earlier Pawara used to grow only Kharif crops such as sorghum (jowar) or maize. He grew the maize as a rain-fed crop in a land that measured less than two acres. Because the remaining land was largely in hilly stretches and non-productive. He would take up labor work during the Rabi season.

Taking part in an agri-horti livelihood program, Pawara’s farm income has improved. Despite lacking formal education, he has started an experiential learning center so as to share with other farmers, whatever techniques he has learnt.

In 2003, Pawara became a part of the wadi program of BAIF Development Research Foundation (BAIF). The wadi program is an agri-horti forestry-based livelihood model, introduced to ensure sustainable and climate-resilient livelihood.

The model included converting the degraded lands of tribal families into productive ones by planting fruit trees and planting multipurpose trees along the borders of the lands. The method includes intercropping, in addition to soil and water conservation measures.

Six years after planting, the yield in Pawara’s land has increased. The land’s fertility has improved. Soil conservation and better water management have enabled him to undertake farming of Rabi Crops. He no longer has to take up labor work during winter and is a proud full-time farmer of his land now.

Although he could not take formal education, he has a keen interest in maintaining records about the plants and trees that he is growing, their usages and their importance. Pawara is a very inquisitive person who learns, implements and then reflects on the whole experience.

In 2008, with BAIF’s support, he started a people’s academy at his house. Known as the Center for Experimental Learning, the academy is for initiating farmers’ meetings and field trainings. It also serves as an information center for various cultivation methods and demonstrations.

Many luminaries including scientists from various state agriculture universities, Indian Council of Agricultural Research (ICAR) and Krishi Vigyan Kendras have visited the center. Students from IIT-Mumbai, Institute of Rural Management Anand (IRMA) and thousands of tribal farmers from remote villages of Maharashtra, Gujarat and Madhya Pradesh have also gained knowledge at the center.

Through the people’s academy, Pawara’s work and approach have been resourceful to change the lives of thousands of poor tribal families in remote villages of Nandurbar district. He has served as a resource person for more than 50 field training programs and has participated in more than 15 awareness programs.

Along with the people’s academy he has also contributed to establishing a community seed bank. More than 120 landraces of different crops in Satpuda hills have been conserved and made available to farmers through Yaha Mogi Mata Biyane Samvardhan Samiti in Dhadgaon.

The kitchen gardens include lemon grass, and fruit species such as guava, papaya, lemons, etc. There is also an in-situ conservation center for the conservation of indigenous landraces of maize and the sorghum crops mounted by him.

Mochada Pawara is a recipient of Vasantrao Naik Sheti Nishtha Puraskar 2008, given by the Government of Maharashtra. He was felicitated by Dr R R Hachinal, chairperson of Protection of Plant Varieties and Farmers Rights Authority (PPV & FRA), Ministry of Agriculture, in March 2013 for agro-biodiversity conservation work.

He was honored with the Best Farmer Award on the Golden Jubilee year of Maharashtra, for his extension work in innovative agricultural practices among the farmers of tribal villages in Nandurbar district.

Mochada Pawara is a classic example of how ambition, zeal to work for the community and innovative approach can enable social change.