Villagers are on a do-or-die agitation against coal pollution

Villagers near Kulda mines have been fighting against coal pollution for over a decade. With no respite after representations and court cases they took to renewed protests in January 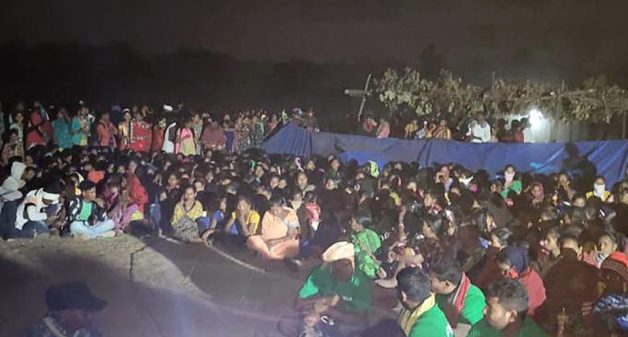 For over a decade, villages near the Kulda opencast mine in Odisha’s Hemgiri administrative block in Sundargarh district have been fighting coal pollution. In a desperate bid to highlight their unrelenting situation, the people of the area are now locked in a ‘do-or-die’ agitation against the project since January 2021.

In February, Rajendra Naik, a human rights defender from Ratanpur, one of the affected villages located 10 km from the mines, filed an application in the Odisha High Court, against the central and state government and the Mahanadi Coalfields Limited (MCL), a subsidiary of Coal India which manages the mine.

The high court in its order on 17 March directed the collector of Sundargarh district to hold a detailed enquiry involving local villagers and representatives of the government of Odisha and the center. The collector, Nikhil Pavan Kalyan, held a meeting on 23 March; he passed an order on 24 March restricting the plying of vehicles from 6 am to 1 pm except on public holidays.

His order called for covering the vehicles, increasing the water sprinkling in the villages for dust suppression, and raising school walls high to prevent dust. The district administration was asked to assess crop damage due to dust and impact on ponds in the area.

Since 2007-08, the residents of Taparia, Ratanpur and other nearby villages in the Hemgiri block of Sundargarh district have suffered incessant dust pollution from the daily 3,000 dumper trucks of coal which pass through their villages.

On 19 January, they launched an agitation that is still going on, even though the authorities have tried to suppress it in many ways. Despite the collector’s order in March, the restriction on trucks plying is already being violated, according to local residents. Earlier court directives to control coal pollution have failed due to administrative apathy.

The villagers affected by pollution had opposed the expansion of the mine’s capacity, citing non -compliance with an earlier environmental clearance for a year in 2018, which increased the mine’s capacity from 10 million tons per annum (mtpa) to 14 mtpa.

There were many conditions attached to this clearance which included regular medical camps, controlling fugitive emissions along the road with mechanized sweeping and spraying, and creating a thick green belt in the downwind direction of the project site,

Despite the residents’ opposition, in January 2021, an expert appraisal committee of the Indian government’s environment ministry recommended the expansion of Kulda mine’s capacity from 14 mtpa to 19.6 mtpa.

A news report in January 2021 mentions the ‘economic blockade’ at Taparia village by locals who disrupted the movement of coal-laden trucks on Bankibahal-Taparia road. It said that initially the protestors were demanding repair of the damaged road but now are adamant about stopping the transportation of coal through their village.

Far from it being an issue of road repair or merely transportation or even an economic blockade, it is a critical issue of coal pollution which the scheduled tribe and scheduled caste communities living in these villages near the Kulda and Basundhara mines have suffered for over a decade.

The coal is transported to various places in Chhattisgarh and the 25 km road stretch between Bankibahal and Tiparia on the Odisha-Chhattisgarh border has dwindled to an unmotorable mess of potholes and stones.

Every day the trucks from the opencast mine at Kulda pass through 19 villages, and swathe the villages with fine coal dust which affects thousands of people, said Naresh Meher, one of the protestors. The road, which is the main bone of contention, is not the only thing at stake for the communities. The intense coal pollution disrupts every single minute of their lives.

It is after a decade long struggle against pollution and exploring legal avenues that the affected villages embarked on a ‘do or die’ agitation.

Odisha has the second-largest coal reserves (24%) in the country with stocks of almost 80 billion tons. On 2 April, at the MCL annual press conference, P.K. Sinha, the chairman-cum-managing director, said that coal production and dispatch of MCL in financial year 2020-21 was the highest ever at 148.01 million tons (mt), and 146 mt respectively.

A site inspection and monitoring report of 2019, by the Union Ministry of Environment, Forests and Climate Change shows that concentrations of particulate matter 10 and 2.5 are above permissible limits in the area. It suggested more sprinkling and control measures. Also, the company was not monitoring fugitive dust emissions from the mining operations, among several shortcomings.

Moreover, the promised green belt is also nowhere to be found and there is no proper health assessment on the impact of coal pollution, said Meher, from the Janshakti Vikas Sanghatana, a coalition of affected communities from 25 villages in the area.

He alleged that the health situation has worsened over the years. He suffered from tuberculosis as do other people in Ratanpur village and two of his uncles passed away due to cancer. His younger brother died after he contracted tuberculosis and then cancer.

This area had a dense forest with panthers but since a few years, there has been no sighting, said Sarita Barpanda, a lawyer with the Human Right Law Network (HRLN) who is helping Meher and others in the local region with their legal cases.

The pollution is not only impacting the health of the people but also their livelihoods. The dust from coal has adverse impacts on the cultivation of paddy and kendu (or tendu leaves used for rolling tobacco in beedis) leaves.

Often they are discolored and do not fetch good prices, Meher said. There is an additional problem of slag being dumped on the roads from a sponge iron factory, one km from Ratanpur, in the name of road repairs.

The scheduled castes and tribes in the area do not own much land and they cultivated the nearby forests. Meher said their claims for titles for the forest land under the Forest Rights Act, 2006, have been unsuccessful.

“We have scaled back the level due to COVID-19 but the agitation continues. When we started our protest in January in Taparia village, false cases were filed against us and 16 persons including me were jailed. Then the police enforced prohibitory orders, so we moved to another village – Kandadhoha – to protest,” Meher said.

There, he alleged that the local transporters and members of a coal mafia, operating in the region, filed cases of attempted murder and dacoity against the protestors following which the police arrested 12 men and 12 women.

Then, the protest moved to Ratanpur where they voiced their concerns about poor roads and pollution. On 23 March, the district collector arrived with many police personnel. “We spoke to the tehsildar but he supported the MCL while saying the company will suffer losses if they do not run the trucks. He had no sympathy for the villagers,” said Barpanda.

In 2016, an order by the Odisha High Court had said that the road should be repaired and till then, no vehicle should ply on it. It had reviewed the road from Bankbihal to Taparia and said that two-ton multi-axle vehicles should be stopped till it was repaired.

Prior to that, in 2015, a memorandum of understanding was signed between the Odisha government and MCL for construction of a four-lane coal corridor from Bankibahal to Bhedabahal (in Sundargarh district where an ultra-mega power plant is proposed), as the existing road is not fit for multi-axle heavy vehicles.

Since that was not done, the heads of 26 panchayats filed a writ petition in the Odisha High Court in 2016. The court ordered the formation of a committee that inspected the road from Sundargarh to Bankibahal/Taparia and submitted its report in March 2017.

The report ordered stopping the movement of trucks from Bankibahal to Taparia till the road was widened and repaired. The court ruled that a coal corridor must be built within a period of two months of the order and must be completed by the end of 2018 on a war footing.

It had also asked the collector to restrict the movements of vehicles and said that one of the conditions should be that multi-axle vehicles would ply only from 11 pm to 6 am. But none of this has happened and orders to restrict truck movement has been willfully disobeyed.

An MCL spokesperson said that there is no alternative to this road and it was being repaired by Jindal Power. He claimed that the timings regarding the movement of trucks are being adhered to and MCL was cleaning the ponds and spraying water to control coal dust. He said there was some proposal for a coal corridor but did not have any details.

The spokesperson said the problem the people are facing should be resolved in a few months. MCL was also dealing with the pollution, and while there will be some pollution due to coal dust, the company was doing all it can to improve the matter, he said while stressing that MCL holds health camps for the people.

Meena Menon is an independent journalist based at Mumbai. Views are personal.