Why we need a gender-sensitive pandemic management

Unable to collect mahua flowers and other forest produce because of fires in Bandhavgarh Tiger Reserve, tribal communities already impacted by the pandemic have lost their livelihood 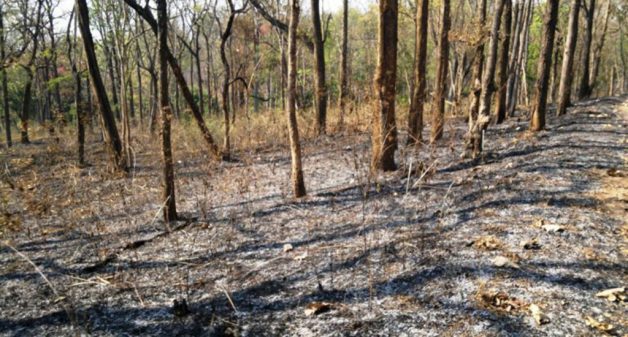 Forest fire severely affected the income of forest dwelling tribes, who were already facing livelihood loss because of the lockdown (Photo by Jaseem Hamza/Wikimedia Commons)

“I have never seen this kind of a forest fire before. This year, the fire entered our village, and I could see that it was just 100 meters away from my home. Those three days of fire were horrific for us,” Brind Prajapati, a forest dweller who hails from Bamera village of Bandhavgarh Tiger Reserve (BTR) in Madhya Pradesh, recounted the fire incident that took place in the forest area in the last week of March.

Prajapati and his family usually collect minor forest produce (MFP) from the forest, but the fire, which went on for some days, hampered their work, impacting their earnings. “My village falls under Pataur range of the forest which was badly hit by the fire. Villagers could not collect mahua flowers and incurred huge losses,” said Prajapati.

Prajapati’s family usually collects three quintals of mahua flowers during this season, but this time they could not. This season was important for the forest dwellers as their livelihood had already been hit by the COVID-19 pandemic.

“Villagers usually migrate to cities in search of jobs, but due to the lockdown, that option is not available. Mahua flowers and other minor forest produce were our last hope after losing jobs due to lockdown,” added Prajapati.

It highlighted an advisory by the Ministry of Environment, Forest and Climate Change (MoEFCC) which instructed all states and union territories to restrict entry within protected areas, adding that it would immediately impact about 3 to 4 million people living in and around protected areas.

“These are mostly tribal communities including Particularly Vulnerable Tribal Groups (PVTGs), nomadic and pastoral communities, fish workers, among others, and are most dependent on the natural resources within and around the protected areas for their livelihoods,” the report added. It was sent to the Ministry of Tribal Affairs. The ministry claimed that measures are being taken to protect the tribes’ livelihood.

During 2020-21, the state government procured MFPs worth Rs 157.51 crores to provide immediate livelihood support to tribal MFP gatherers, said Renuka Singh Saruta, Minister of State for Tribal Affairs while replying to a question in Lok Sabha in March. The question was about the ministry’s measures to address problems faced by tribes because of the lockdown.

“The trends are not very pleasing, it is rising both in terms of number and impact,” said Abdul Qayum, an IFS officer who was a part of a study on forest fire trend analysis and effect of environmental parameters in Jharkhand.

Ajay Dubey, a Madhya Pradesh-based wildlife and environment activist said that there are loopholes in the report. Dubey’s suspicion about the claim that no human or animal is harmed, seems to hold some validity if it is compared to the fires in Uttarakhand.

According to the Uttarakhand forest department report, as much as 393 sq km (3,963 hectares) of forest and forest villages were affected by 2,920 incidents of fire this year. While this area is almost a quarter of the area that came under fire in Madhya Pradesh, the fire claimed the lives of eight people and 29 animals and injured three people and 24 animals.

The BTR field report said that the negligence of locals, natural causes, and human-animal conflict were a few causes of fire in Bandhavgarh. “A few herds of elephants that entered Bandhavgarh from Chhattisgarh are damaging the property and crops of locals. They may have set fire in the forest to keep the elephants away,” said Satendra Kumar Tiwari, a wildlife photographer based at Tala in Bandhavgarh.

As with ecological impacts of fires, comprehensive assessments of the economic losses due to fires in India are lacking, said a report jointly prepared by MoEFCC and the World Bank. “In official reports and statistics, monetary damages due to forest fires are generally assessed only for the loss of standing trees (natural or planted) in terms of their timber value,” the report said.

The impact of forest fire on biodiversity is grossly underestimated. The loss of wildlife was not being accounted for, found a Parliamentary Committee report which was presented to the Rajya Sabha in December 2016. This report also recognizes the loss of livelihood of forest dwellers and those dependent on forest produce.

“The impact of increased fires in India on economic outcomes is significant,” said Jayash Paudel, an environmental economist and assistant professor of economics at Boise State University, in a conversation with Mongabay-India.

“The magnitude of the economic impact of forest fires in India will depend on a range of socioeconomic factors, including the distance between fire sites and habitation, land tenure, and land cover type. I do see a large economic impact on the lives of forest dwellers as well. Air pollution can damage crops and trees in different ways,” he added.

Manish Chandra Mishra is a journalist based in Madhya Pradesh. Views are personal.

This story was first published in Mongabay India. The original version can be read here.