Why we need a gender-sensitive pandemic management

Bihar floods and COVID-19 – Is there a connection?

As available data point to a probable connection between floods and a higher incidence of positive coronavirus cases, the overlap needs to be considered in planning for 2021 monsoon 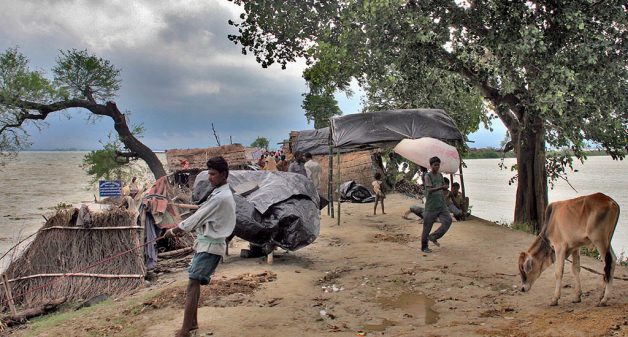 In May, 2020, Nirmalya Choudhury, a researcher with VikasAnvesh Foundation, and I had jointly written an article titled Is North Bihar prepared for the overlapping challenge of COVID-19 and the annual floods? for Gaon Connection, an online magazine.

In the article, we had highlighted the need for strategic preparedness and planned response to address the vulnerabilities of habitations that were likely to be exposed to the COVID-19 pandemic and the threat of floods in the coming months.

Exactly after one year, the past is being revisited in a more critical context, with the hope that overlapping hazards will be addressed with adequate preparation and orchestrated response during the forthcoming monsoon.

It is meaningful to highlight a few critical trends of the pandemic and floods respectively and of their possible concurrence in the same expanse last year (2020). According to the Health Department (HD), Government of Bihar (GoB), on 31 December, 2020, a total of 252,792 positive cases and 1,397 deaths were recorded in the state

Therefore, it will not be wrong to claim that the figures shared by HD as on 31 December, 2020 can be considered as the impact of the first wave of COVID-19, considering the calendar year and the duration of the first wave as synonymous.

The first daily report on floods highlighting the impact in North Bihar was published by the Disaster Management Department (DMD) on 13 July, 2020 on their website, in which seven districts – Sitamarhi, Sheohar, Supaul, Kishanganj, Darbhanga, Muzaffarpur and Gopalganj were mentioned as affected. A total of 23 administrative blocks, 98 panchayats and 168,668 persons were affected.

Based on the data available in the public domain it is difficult to show with surety, a correlation between the 747 active cases in the 23 flood-affected blocks in the seven districts. At the same time there are no counter arguments establishing the opposite. However, the documented data according to HD’s daily report states that there were 747 active cases on 13 July, 2020 in these seven districts.

The issue of overlapping hazards becomes further intriguing when data of floods and COVID-19 as of 09 September, 2020 are compared. According to DMD’s last of the daily flood report available in the public domain (as of 9 September, 2020) a total of 16 districts were affected.

However, there was a second cycle of floods in North Bihar between 23 and 26 September, 2020, but due to unavailability of Form IX – the final flood report of 2020 highlighting the cumulative impact of floods in the public domain, therefore, the last of the daily report shared on 09 September, 2020 by DMD has been considered as the representation of the cumulative impact.

The total number of tests in the state works out to be a mere 4% of the total population of Bihar. According to the Census 2011, the total population of the 16 flood-affected districts in North Bihar is 49.8 million. If on an average 0.11 million tests were conducted in each of the 38 districts then approximately 1.76 million tests were undertaken across the 16 flood-affected districts.

According to HD’s daily report of 27 May, 2021 the 22 flood-prone districts of North Bihar (including Bhagalpur) have the following positive and active cases. (The other districts in Bihar that encounter occasional floods are Buxar, Bhojpur, Lakhisarai, Munger, Patna, Nalanda, Nawada, Jehnabad, and Arwal)

Barring Sheohar, Siwan and Vaishali districts, the 19 flood-prone districts of Bihar have experienced floods for a minimum of 10 years between 2000 and 2020. Districts that have experienced floods more than 15 years in the past two decades are Supaul, Saharsa, Khagaria, Muzaffarpur, Pashchim Champaran, Purnea, Bhagalpur, Katihar, Madhubani, Darbhanga and Samastipur.

This correlation is an area that must be delved deeper while planning for the forthcoming 2021 monsoon season, because it is a point of concern keeping in view the present status of the second wave and the future possibilities of the third one.

On 04 May, 2021 the DMD issued detailed guidelines for flood preparedness for the forthcoming monsoon at the district level. Similarly, on 05 May, 2021, GoB issued a Flood Control Order framed by Water Resources Department (WRD).

The second and concluding part of this flood series, will highlight the pre-flood preparedness measures identified by DMD and WRD, alongside certain additional measures to ensure a comprehensive approach for the probable overlapping hazards at the district level. The article will also emphasize on how the preparedness strategies can be tailored as per the existing status and possibilities of the overlapping hazards.