When COVID-19 reaches the vulnerable tribes in hilltops

Despite government’s efforts, reluctance to get tested and isolated, and not adhering to COVID-19 safety protocols, has led to an increase in infection among Odisha’s particularly vulnerable tribal groups 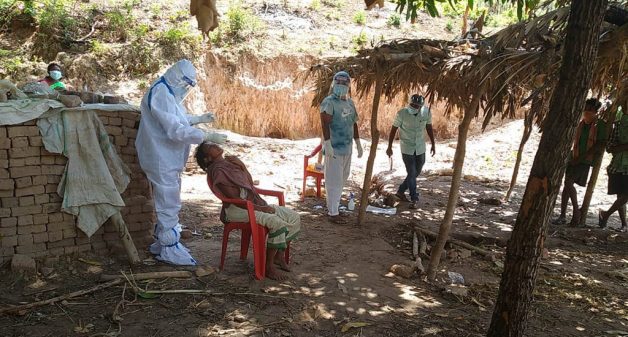 Used to traditional medicine, PVTGs are reluctant to get tested, as a positive result will entail isolation and loss of livelihood (Photo by Dolagobinda Nayak)

There are nearly 12,000 Bondas as per the 2011 Census, living on the hilltops of Bonda Hill, at about 4,000 feet above sea level in Khairaput administrative block of Malkangiri district. They live in 30 villages under Mudulipada panchayat in the lower part of the hill and Andrahal panchayat in the hilltop. The residents are hence known as lower and upper Bondas.

On 26 April, 12 Bondas tested positive for coronavirus, the first infection among the PVTG community. According to the 2011 Census, Odisha’s share of the country’s total tribal population was 9%. Tribes constitute 22.85% of Odisha’s population. The first COVID-19 infection among Dongria Kondhs came in the second week of May.

Though the tribes got infected during their sojourn to non-tribal areas, close contacts and non-adherence to protocols, helped the spread of coronavirus. Used to traditional medicine and local healers, and the fear of loss of livelihood in the event of testing positive, they are reluctant to undergo testing and vaccination.

“When the nearby weekly market closed during the lockdown, a group of Bonda youth went to Anakadil in Andhra Pradesh to sell fruits and forest produce,” said Ghasi Sisa, a language teacher and member of the Bonda community. “It is suspected that they brought the infection to the hill.” After the 12 Bondas tested positive, the administration demarcated a containment zone, and started testing and screening the vulnerable tribes.

Likewise, 217 km from the Bonda foothill, Dongria Kondhs in Niyamgiri Hills of Kalyansingpur administrative block in Rayagada district are also infected. Till now 136 Dongria Kondhs have tested positive. Besides, Kutia Kondhs in Kandhmal district, Chuktia Bhunjia in Nuapada and Paudi Bhuyans living on the hills of Sundergarh district have also been infected.

“Last year they followed all guidelines. Since the virus didn’t reach their village, they thought it infects only the urban people,” said a community member working with Dongria Kondhs in Parshali panchayat. “They became careless and held festivals, gatherings and marriages.”

“Living in close-knit groups, the indigenous people drink traditional liquor together and venture together into forest for collection of forest produce,” he said. “Not wearing masks and washing hands regularly with soap, a new behavior they are yet to adopt, helped the spread of the virus.”

The Dongria Kondhs were hesitant about the nasal swab test; they insisted on blood test. They refused to undergo the test because of the fear of hospitalization if they tested positive.

“The indigenous people feel fever and cold are normal summer phenomenon and do not require medical attention. They believe in medicinal herbs from the forests,” said Dolagobinda Nayak of Friends’ Association for Rural Reconstruction, one of the non-governmental organizations implementing the Odisha PVTG Empowerment and Livelihoods Program (OPELIP) under Dongria Kondh Development Authority, Parshali.

The villagers believe that Niyamraja, Niyamgiri Hill’s presiding deity whom they worship, will keep the virus away from them. Pramila Swain, an activist who has been closely working with the Dongria Kondhs for nearly three decades observed the tribes’ hesitancy in taking the nasal test when the medical team arrived.

Understanding the situation, the administration took the help of locals to counsel indigenous people about COVID-19 and the need to test all residents of Pakeri, the village with the maximum number of cases in Kalyansingpur block.

“The youths convinced them in the local kui language, and two corona raths (chariots) are moving from village to village to sensitize the Dongria Kondhs about COVID-appropriate behavior and testing,” said Nayak.

“The Paudi Bhuyan tribes living in Pallahada administrative block of Angul district were so fearful that no one turned up for testing,” Deepak Maharana, project manager at OPELIP, told VillageSquare.in. “Villagers came when it was announced as a test for malaria. Out of 110, eight persons tested positive.”

A villager requesting anonymity said, “In every village you will find a few tribal people suffering from fever, cold and cough. But they are reluctant to go for testing. When the medical team comes to their village they run into the forest.”

Home isolation was another problem for PVTGs as most of the houses are single-roomed without proper ventilation. Besides, the tribal women do most of the household work. So they were reluctant to stay in isolation centers, away from their homes.

“Apart from household works, this is the season for plucking mangoes, which fetches them good money,” Nayak told VillageSquare.in. “They were reluctant to stay in isolation centers as they would not be able to earn for a fortnight.”

“During this time the indigenous people go to the hilltop for farming and collecting forest produce,” said Ghasi Sisa. “The tribes feared that staying in isolation center would hamper their work.” So the infected ones preferred home isolation, which helped in spreading the virus.

An activist working in Kandhamal district among the Kutia Kondhs said, “They fear death is inevitable if hospitalized and they will be buried without allowing family members a glimpse.” The infected persons also don’t wear masks. If they see an outsider or medical staff they cover their face with a gamcha, a cotton towel used in rural areas.

After the positive cases among the Bondas, the local administration has taken steps to conduct door-to-door screening. As both Rayagada and Malkangiri districts are prone to malaria and tuberculosis, the accredited social health activists (ASHAs) test villagers for both during the screening.

“It is difficult to differentiate whether they are suffering from malaria or COVID fever so once they test negative for malaria, we give medicines immediately and get a swab test done,” said the medical officer at the community health center in Khairaput.

If they test positive they are asked to stay in isolation centers. “The ASHAs counsel them about wearing masks, regular hand washing and maintaining physical distance from other family members. If there is any pregnant woman at home she will be prioritized,” he said.

For the Dongria tribes also the administration has taken equal steps to contain the spread of COVID-19. A Dongria Kondh said they normally don’t prefer medicines. “They prefer to go to a quack if they develop any symptoms,” said a community worker working among Kutia Kondh tribes in Kandhamal.

“The indigenous groups have rarely received medical support. Government never tried to build that trust among them. The tribes rather depended on traditional healers or disari (priest),” Pramila Swain told VillageSquare.in. “They got frightened seeing medical staff wearing PPE suit; it happened with people in urban areas too.”

Another community worker working with Mankadia, Khadia and Lodha tribes in Mayurbhanj district said, the local administration was yet to conduct door-to-door test of the tribes. Though some of them had cold and cough, they were more concerned about their livelihood, as they collect honey and forest produce and sell during this period. Because of the lockdown they have not been able to.

To inoculate all the PVTGs is a challenging task for the administration. As of now, among the 13 PVTGs, more than 7,000 members aged 45+ have been vaccinated. “Initially Dongrias said ‘Our God will be annoyed with us’ and refused to get vaccinated,” said Nayak.

“After repeated persuasion by local volunteers who convinced the tribes in their local dialect they agreed,” he said. The ASHAs and OPELIP staff trekked to many inaccessible hamlets in these villages to inoculate PVTGs who are vulnerable to COVID-19. As the numbers indicate, a lot more needs to be done to convince the tribes about testing and vaccination.