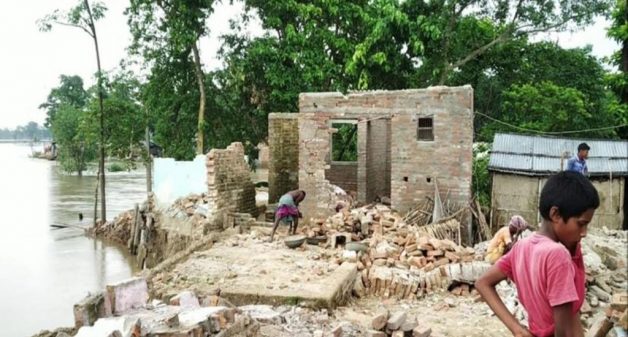 It was only two years ago that 52-year-old Akhilesh Kumar from East Champaran’s Bhawanipur village had built a single-storey house with the money he had earned as a migrant laborer. Back then, he had no inkling of the tragedy that awaited the home that housed his family of seven.

On 5 July, the flooding of River Sikrahna, a tributary of River Ganges, engulfed several houses in the village. “It all happened so fast that we couldn’t save anything, and our house collapsed like a pack of cards,” said Kumar.

Sikrahna, also known as the Burhi Gandak river, turned turbulent owing to heavy rainfall in the Champaran region. This, coupled with the outflow of water from Valmiki Nagar barrage, created havoc in several villages of the Sugauli administrative block, about 25 km from Motihari, the district headquarters.

With many houses like Kumar’s, engulfed by the river and razed to rubble, villagers of Bihar’s Sugauli block in East Champaran district took to demolishing their own dwellings to save the bricks and other construction material from being carried away by the river.

“My house was built almost 15 years ago with hard-earned money. But half of it was demolished by the river, and we had to tear down the remaining to save whatever little construction material we could,” said Sukhiya Devi, who had taken refuge in a plastic makeshift tent along with six family members.

Sant Lal Mahato, another villager, described the collapse of his house as an inescapable part of his destiny. “It would be hoping against hope if we do nothing and keep sitting with our fingers crossed. We may be able to build another house with these bricks if land and compensation are provided,” said Mahato.

Like Mahato, Suresh Prasad hopes for aid from the government. His sons have already removed the corrugated iron sheet used for roof, along with the windows and doorposts of the house that he had constructed 12 years ago. “My dream has been shattered now. We will never be able to stand on our feet if help from the government doesn’t reach us,” said Prasad with his eyes welling up.

Over the past month, almost 100 houses in the village have collapsed due to erosion caused by the Sikrahna River, according to Rajesh Yadav, a former sarpanch nominee. “With our village headman no longer alive, there’s no one in power to look into the tragedy that pervades here,” said Yadav, pointing to a 25-meter stretch of barren land that ‘once bustled with people’.

Amidst the disaster, the people are fighting for their right to live. “Day in and out, we are trying to save some bricks. The earlier, the better, or else, the river’s going to spare nothing,” said Shiv Sah.

As of 8 July, Sah is one of the 1.5 lakh people affected by the Sikrahna floods in the 10 panchayats of Sugauli block. This was the official tally given by Anil Kumar, Additional District Magistrate, Disaster Management, East Champaran.

Authorities attribute the damages to the heavy current of water and the absence of an embankment. “It’s not possible to launch the repair work immediately. However, we are doing everything to rush relief materials to the affected people,” said an official, on condition of anonymity.

Currently, villagers are either residing in makeshift tents or taking refuge in government schools. For food, most of them are dependent on the eight community kitchens operating across the Sugauli block. “We are keeping a tab on the situation. More community kitchens would be run, if required,” said Circle Officer, Dharmendra Kumar Gupta.

The district administration has pressed two National Disaster Response Force teams along with two private boats and a drone into service. Officials informed that dry ration and about 3,500 plastic sheets have been distributed to the affected people.

Further, the district administration has also launched an assessment of the collapsed houses. “Compensation for houses would be given as per the applicable rules,” said Shirshat Kapil Ashok, District Magistrate, East Champaran.

Meanwhile, floods continue to rampage dwellings in the neighboring West Champaran district as well. Almost 15 families from Biranchi 3 village in Damarapur panchayat in the district’s Mainatand block have been affected, with their house being engulfed by the Maniyari River.

During the dead of the night on 1 July, 55-year-old Vimal Mitra and his family members were jolted out of sleep when a part of their house collapsed. “It took no time for us to understand what had happened. We rushed out to a safer place with whatever household articles we could lay our hands on,” said Mitra.

The next day, at the break of dawn, Mitra and several other villagers returned to discover that their houses were nowhere to be found. The houses had collapsed and had been washed away.

Village sarpanch Hari Das said the residents of Biranchi 3 have been facing the threat of displacement since 1998 because of regular flooding. “We are fighting for our right to live. Men in khaki and officials came, but nothing was done,” said Das, adding that 200 families have been displaced in the last two decades.

Circle Officer Kumar Rajiv Ranjan said that dry rations and other relief materials have been distributed. However, villagers feel that entitlement must be increased. “It’s too meagre to meet our needs,” said Mitra.

Mitra added that it was relief material received from private individuals like Dilip Verma former BJP MLA from West Champaran’s Sikta constituency, which has helped them. Verma provided a sum of Rs 50,000 through his close associate to be spent for victims who were rendered homeless, according to Das.

V Shilpi is a teacher and journalist based at Bettiah in West Champaran. Views are personal.

This story first appeared in 101Reportes. The original can be read here.