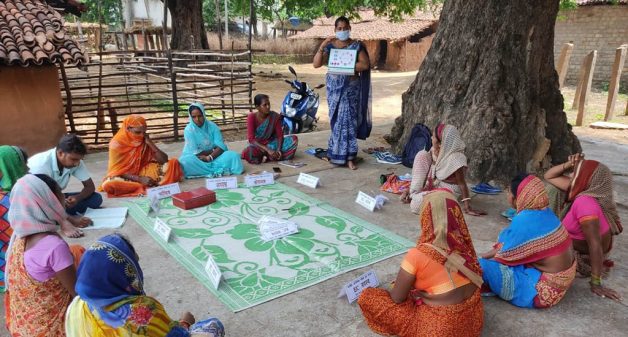 With the sudden surge in COVID-19 during its second wave, the Government of Jharkhand as like other states undertook a series of measures to protect people from the coronavirus. But soon after the government issued preventive guidelines and protocols, there was a negative reaction among people.

Vaccine hesitancy came up as one of the critical challenges in tackling COVID-19. People from different sections, especially of the rural society in the state, developed wrong perceptions regarding the vaccination drive.

Under such challenging circumstances, a collaborative initiative involving the state government and development organizations engaged motivated local women volunteers to bust the vaccine myths. Their efforts in facilitating vaccination have been encouraging.

Interacting with people in rural areas in multiple districts of Jharkhand revealed the reasons for their negative mindset regarding the COVID-19 vaccine. People referred to incidences of serious side effects that some experienced immediately after receiving the first dose. They also referred to cases of fatalities after vaccination, without knowing the actual reasons behind the death.

Several people expressed their concerns regarding wage loss, as they felt that vaccination may cause illness for several days and they may not be able to work. In a few places the community believed that unlike the routine immunization administered to children, the COVID-19 vaccine would cause illness for a prolonged period.

To clear such misconceptions and to remove vaccine hesitancy, services of the Jharkhand State Livelihood Promotion Society, which has a network of self-help groups (SHGs) and mentoring sessions for members, were utilized.

The volunteers, called setu didis (the words meaning bridge and sister), act as a bridge between government service providers and communities. These women facilitators, were selected by the cluster level federations (CLFs) of SHGs. They were mobilized in 38 selected blocks of five districts in the South Chhotanagpur region.

The setu didis get symptomatic people screened and get them isolated at home if necessary, or give timely referral through accredited social health activists (ASHAs). They encourage returnee migrants and others to get tested for coronavirus, promote COVID-appropriate behavior with the help of SHGs and CLFs and encourage villagers to get vaccinated.

Each CLF deploys two setu didis. With an average of three CLFs functioning in each block and 4 to 6 setu didis per block, a total 235 such women facilitators received necessary technical information and supportive supervision and incentives from TRIF.

As of 5 July, the 235 setu didis have worked with the 38,853 SHGs, covering 2,662 villages of Jharkhand. They visited 51,882 households since middle of April. They have been able to track migrants and identify fatalities that had been unreported, among other works related to testing and vaccination.

With their intensive engagement with CLF-village organization-SHG structure, setu didis tried to change the negative mindset of people. Being local residents helped them empathize with the fear and concern of the communities very easily. They followed different approaches, going beyond prescribed outreach methods.

Each setu didi covered 12 to 14 villages, working with local women’s institutions, Panchayati Raj Institution (PRI) members and frontline workers. During lockdown they found it difficult to reach all villages within their respective working area, but they took charge of 3 to 5 villages neighboring their own village.

For promoting their work in other villages, they identified saktriya didis, meaning active women, from each of the SHGs. They worked hand in hand to promote COVID-19 preventive services being offered by the state’s health systems.

In a few places villagers had turned hostile and violent against government frontline workers, as they had warned the frontline workers not to promote vaccination. Even in such situations, setu didis could reach out to residents and convince them, banking on the strength of the local women collectives.

They were successful in convincing the senior most members of families to influence other eligible family members to get vaccinated. The setu didis set an example by getting vaccinated, and also referred to people living within the village without prolonged complications after taking the vaccine. Similarly, all the CLF members in Nagri block of Ranchi district got vaccinated and set an example.

These factors helped them nullify the negative mindset of people in accessing vaccination services. Such strategies worked even in the inaccessible and Naxal-affected areas in Malam and Bamda panchayat of Chainpur block in Gumla district.

In Rania block of Khunti district, backed by SHGs, setu didis could establish an effective framework with the local PRIs and youth groups and also with other frontline workers to improve vaccine coverage. This helped more than 90% people in the 18+ and 45+ age categories in Bania panchayat receive their first dose.

One of the concerns of villagers related to the effects of vaccination for people with comorbidities. Setu didis, with the help of ASHAs and ANMs checked the parameters. The ASHAs had been provided with IR thermometers and pulse oximeters. ANMs already had their kits to check blood pressure and do blood test. The villagers were able to understand the intent.

In a few blocks of Lohardaga district, setu didis identified a few SHG women who agreed to explain how they mitigated the side effects of vaccination, which affected them badly for a couple of days. With their coordinated effort and inter-personal communication, more than 80% vaccination was achieved within a few weeks in Kairo, Sadar and Bhandra blocks.

Choosing women mobilizers and having them engage with the community has shown how certain aspects are critical in achieving desired results.

Rural communities need effective information, psycho-social counselling, and inter-personal communication to address their concerns and also to get over false ideas. Intensive interaction and counselling should be a part of promoting vaccination, testing, etc.

Effective engagement with local women’s groups and enlisting the help of incentivized cadre like setu didis at cluster level is a cost-effective, practical intervention. It can be scaled up utilizing state mechanism such as National Rural Livelihood Mission.

Multiple instances have proved that deploying such incentivized cadre helps promote routine health and nutrition services for pregnant women and children, which is a model implemented by TRIF in different states with other partners. It improved access to services for TB patients. Hence the model can be treated as an empirical evidence, as has been acknowledged by government authorities.

Although there are multiple actors in a community discharging their own responsibilities, an anchor to ensure the required coherence in service promotion promotes access to health. Such incentivized anchors can offer complementary and supplementary support to government frontline workers.

It has been observed that a straight jacketed approach inviting people to avail the public health services does not always work. Local level differential approaches with interaction at family level and group counselling by engaging local champions influences the health-seeking behavior of people.

With the support of SHGs, PRIs and traditional or religious leaders, the issues of domestic violence, fear of wage loss while availing needed services, and influence of other family members in restricting access to public health services can be addressed. These issues reflect on people’s health as well as service uptake.

The micro planning processes should consider awareness, availability of vaccines on time and in required quantity, need-based medical support and counselling through appropriate actors utilizing the local eco-systems. The responsive and support servicesof the government mechanism must be implemented to address the possible after-effects of vaccination.

Ranjan Kanti Panda is associated with TRIF. Views are personal.