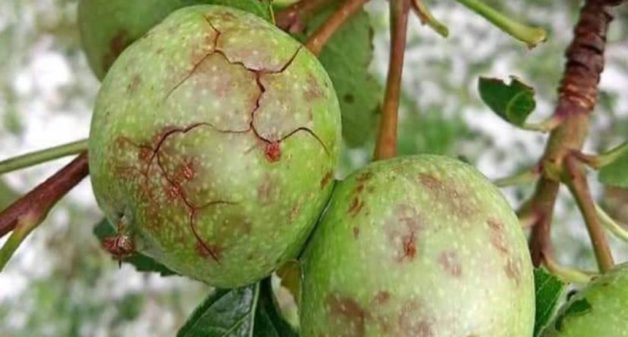 The farmers and orchardists of Himachal Pradesh, known as India’s fruit basket, are bearing the brunt of extreme weather events. The orchards in the state, primarily apple, have suffered heavy losses due to unseasonal rain, snow and hailstorm that hit the Shimla region over the last two months.

The ill-timed snowfall and hailstorm in April and May, coupled with a deadly second wave of COVID-19, has doubled the concerns of the farmers and orchardists.

Himachal Pradesh is the second-largest apple producing state in the country. According to the statistics of an internal survey put forth by the state’s horticulture department, 368, 603 metric tons of apples are grown in 113,154 lakh hectare area in Himachal Pradesh.

More than 100 varieties of apples are grown in the state. With the arrival of new varieties, apple horticulture has also been introduced in warmer regions in low altitude areas. The maximum apple production is in Shimla district, which produces about 65% of the state’s total harvest.

This region of Shimla, known as the apple belt, includes Theog, Narkanda and Kotkhai. Apple horticulture is also practiced in the regions of Kinnaur, Mandi, Kullu, Chamba and Lahaul-Spiti. According to Himachal Pradesh Horticulture Department, the state’s turnover from horticulture is Rs 4,000 to 5,000 crore every year.

The region witnessed snowfall and hailstorm in April and May, in addition to the deadly second wave of COVID-19, which increased the concerns of the apple farmers and orchardists.

Due to lockdown restrictions imposed by the state government, orchardists encountered a severe labor crisis as most of the labor engaged in the orchards come from other states. Also, orchardists were not able to move around to tend to orchards that were far away.

In an internal assessment survey conducted by the horticulture department in May 2021, it was found that 55,515 plants had been destroyed, while 2,007,000 plants were partially damaged — impacting 60,000 farmers and orchardists.

The department recorded the loss in horticulture due to snowfall and hailstorm in April as Rs 254 crore. However, the Kisan Sabha, an association of farmers and orchardists, pegs these losses at more than Rs 2,000 crore.

The loss has significant ramifications. According to the Himachal Pradesh Economic Survey, the agro-horticulture sector contributes 13% to the state’s GDP. Apple horticulture, which is the state’s economic backbone, has the largest share in it.

J C Sharma, the director of Himachal Pradesh’s horticulture department, said that Shimla has the highest number of apple orchardists who have suffered losses. In many places, entire apple saplings and trees have been uprooted.

“There was so much hailstorm that the anti-hail net we had put up to protect the apples also were torn apart. Our plants were also uprooted due to excessive snow,” said Rohit Sharma, an orchardist from Theog.

Apple plants have been uprooted by the hailstorm, destroying many orchards of the region. Due to this, the orchardists will not be able to harvest the crop for the next five to ten years. Sharma added that the maximum damage by hailstorm occurred in Theog, Narkanda, Kharapathar, Baghi and Matiana areas of Shimla district.

Prashant Sehta is an apple orchardist and the general secretary of Young and United Growers Association, which works for the welfare of apple orchardists. Sehta believes that the damage caused to the orchards due to the extreme weather in April has doubled with the hailstorm of 31 May.

The extreme weather events cut the harvest by half. “Even the remaining apples were damaged and the fruits won’t get good prices in the market,” he added. “A box of apples which usually sells for Rs 2,000 will fetch Rs 900 to 1,000 because of the stains.”

According to the Himachal Pradesh Horticulture Department, 3.20 crore apple boxes were produced in 2019. This time too, the horticulture department had estimated the production of 3.50 crore apple boxes. However, the unpredictably heavy hailstorms have changed these estimates; and low output is expected this year.

The horticulture nurseries that grow apple saplings have suffered a loss to the tune of Rs 30 crore due to the hailstorms. The damage will have an indirect and adverse impact on the prices of apples across the country.

However, the most affected are the farmers and orchardists of Himachal. Gaurav Semta, an orchardist from Theog said, “My orchard is 70% damaged due to the heavy hailstorm. During the flowering stage, I was hopeful of getting a good crop this year, but the sudden shift in weather has shattered me.”

“I am constantly worried about the livelihood of my family,” Semta added. Gaurav Semta and Rohit Sharma have both demanded that the government compensate them for their loss.

Rohit Prashar is a journalist based at Shimla. Views are personal.

This story was first published in 101 Reporters. The original can be read here.